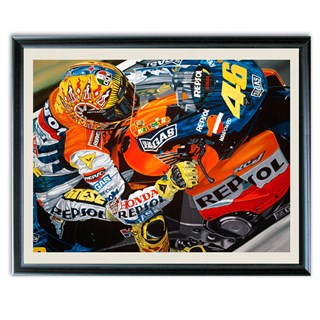 Valentino Rossi won the 2002 Moto GP series on a Honda with four rounds to spare. The twenty three year old Italian superstar was already a multiple World Champion, having won the 2001 500cc Championship and previously the 250cc and 125cc Championships. This is a fabulous print by Colin Carter featuring the Doc at full tilt! Each print is hand signed and numbered by the artist. Limited to 850 copies. 75 x 90 cm.
Read more