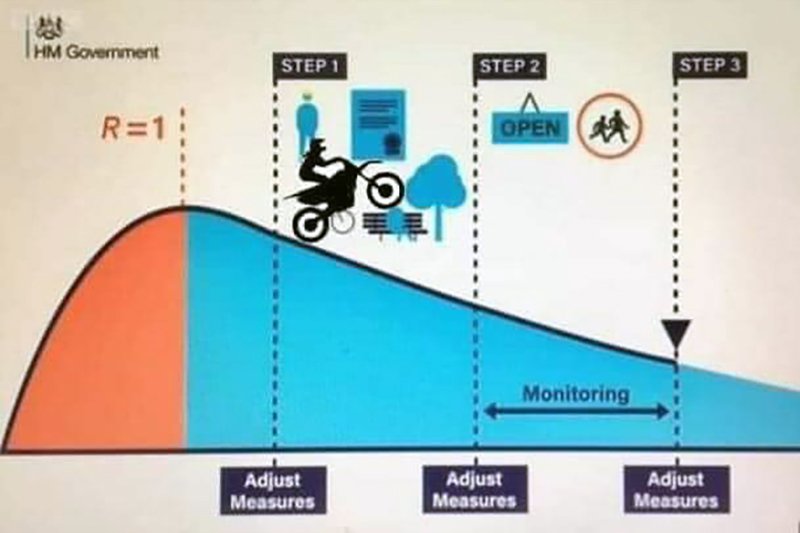 There was a lot of noise on Sunday night after the PM’s address, with lots of people suggesting that bikers had eventually been let off the leash. Well certainly it would seem that both motorists and motorcyclists have been given more legitimate reasons to be out on the bike and, of course, that’s a good thing, but it’s not on open invitation to throw on your leathers and head off to the hills.

There are now more circumstances in which we can get on the bike, but there are limits, and even though some people will always ignore the guidance and the rules, we should all be aware of what we are, and are not, allowed to do.

Clearly, the government wants more of us to get back to work; particularly those who cannot work from home. But the issue is how people should get into work. Public transport is not going to be the best solution for many. The Mayor of London, for example, reckoned in an interview I heard this morning that social distancing could not be maintained at anything over 15% of the system’s capacity. I personally wouldn’t be massively keen to take the bus or the train if I had an option. Yet walking and cycling, which is the government’s preferred option, is only going to work for some.

It leads us to the view that, especially over the summer, commuting into work by motorbike is a way to go. It’s not going to block the roads up, and it’s reasonably self isolating.

We’ve also been told that we can drive/ride as far as we feel necessary to take our exercise. The consensus seems to be that riding a bike, per se, is not exercise, and it’s going to be a stretch trying to convince a Police Officer that you put put on your one-piece leathers so that you could take a walk in the park.

But we have been told that we can travel to meet with one person from outside our household, provided that we then keep two metres apart from one another when we meet up. So again, there’s no reason why you can’t go to such a meeting on the bike.

The bottom line is that, although there has been no specific mention of motorbikes, we have been given greater, although by no means unlimited, freedom to go out for a ride.

Of course bike shops and clothing shops are still closed, although in our case there’s still about a dozen of us in the building every day, taking calls, packing parcels, placing orders with suppliers, keeping the website up to date, and so on.

A lot of customers have asked if we offer click and collect, and the answer is that, no, officially we don’t. In recent weeks an occasional biker has turned up at the warehouse desperate for a new pair of gloves or a helmet, and we haven’t turned them away. But we cannot see that click and collect makes any sense right now. You can’t try stuff on, and, without wanting to sound too rude, in the current circumstances, we’re not really that keen on having much of a dialogue. But surely there’s no advantage In Click and Collect over having stuff sent out to you? Our packages go out on the day for next-day delivery. There’s no despatch charge and no cost to return something either. That’s got to be a lot easier.

So, in conclusion, the latest relaxation in the conditions surrounding lockdown have got to be good news for those of us who have been missing the bike.

I don’t want to sound preachy like all those guys on social media, but I suppose it’s incumbent upon us all not to abuse these latest concessions. If there’s too much bad behaviour, too much abuse of the rules, it’s evident that the government will have no qualms about re-instating the previous conditions.

Hopefully, it won’t be too long before normal service can be fully resumed!