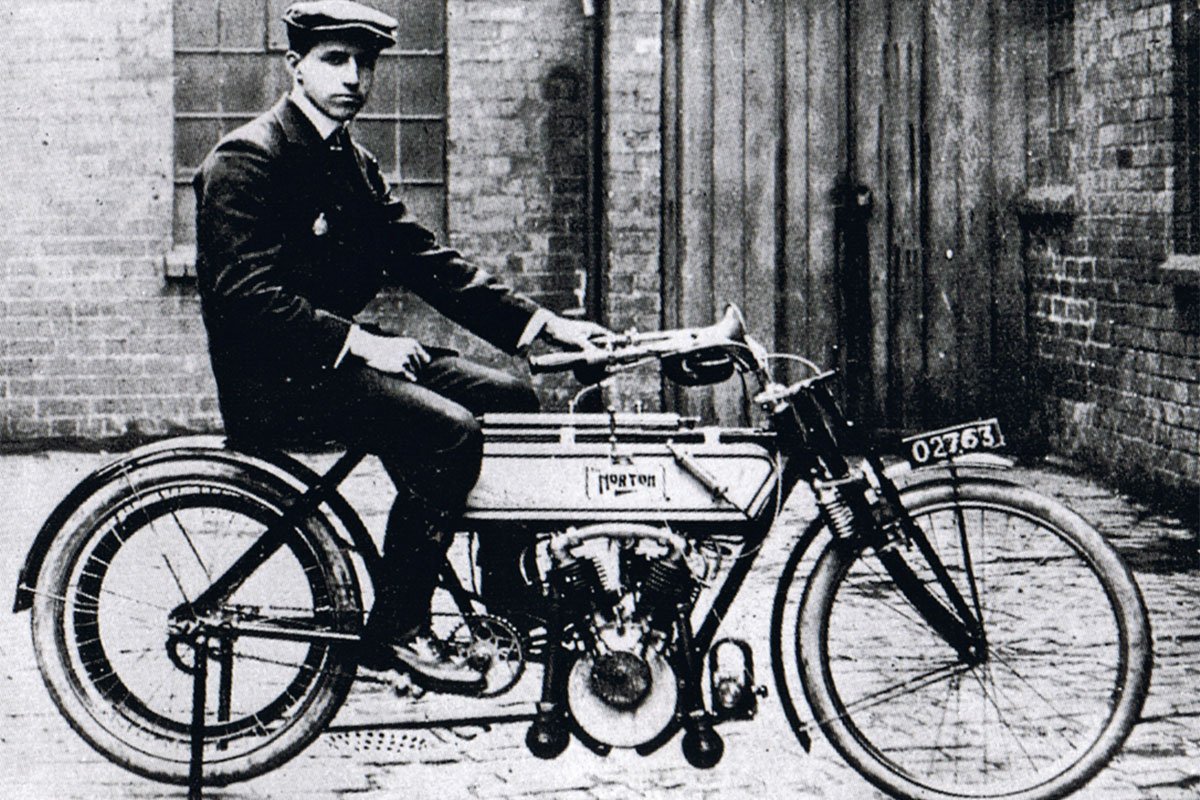 The first internal combustion engined motorcycle was built in Germany by Gottlieb Daimler and Willhelm Maybach, in 1885.

But it was probably France that had the first proper motorcycle industry, with many companies competing to produce ever more efficient and usable machines. One of the most prominent of these early players was of course Peugeot, who still manufacture two wheelers today.

In the UK, the cudgel was picked up by Henry Collier and his sons, Charlie and Harry. Moving up from bicycles, as many of the early companies did, they started to produce motorbikes commercially in 1902, under the Matchless name. In 1907, a Matchless won the first ever Isle of Man TT race.

As often happen, wars speed up the process of technical innovation, and by the end of the First World War the motorcycle had developed into a form of transport that would almost totally replace the horse as a means of travelling across large distances.

The interwar period was a golden era for the motorcycle industry. Although there were many manufacturers around the globe, the industry was dominated by Germany, Italy, Britain and the US. Indeed, many of the today's famous brands originated and blossomed in this period: BMW, Triumph, Harley Davidson, Norton and Moto Guzzi, to name but a handful.

But it is nevertheless true that, in the twenties and thirties, the motorcycle was still a rather exotic machine. It was the preserve of the wealthy and the adventurous, and had not yet become a means of mass transport.

Racing of course flourished, as manufacturers rightly saw it as a means of creating a reputation for their fledgling enterprises, and although each country had its own championships, it was the Isle of Man TT races that every manufacturer aspired to win.

One of the most famous motorcyclists of this early era was the dashing war hero T E Lawrence, who had led the Arab Revolt in the First World War.

He was a fascinating character who sought out adventure and danger, and so it was perhaps only appropriate that, in peacetime, he took up motorcycling. 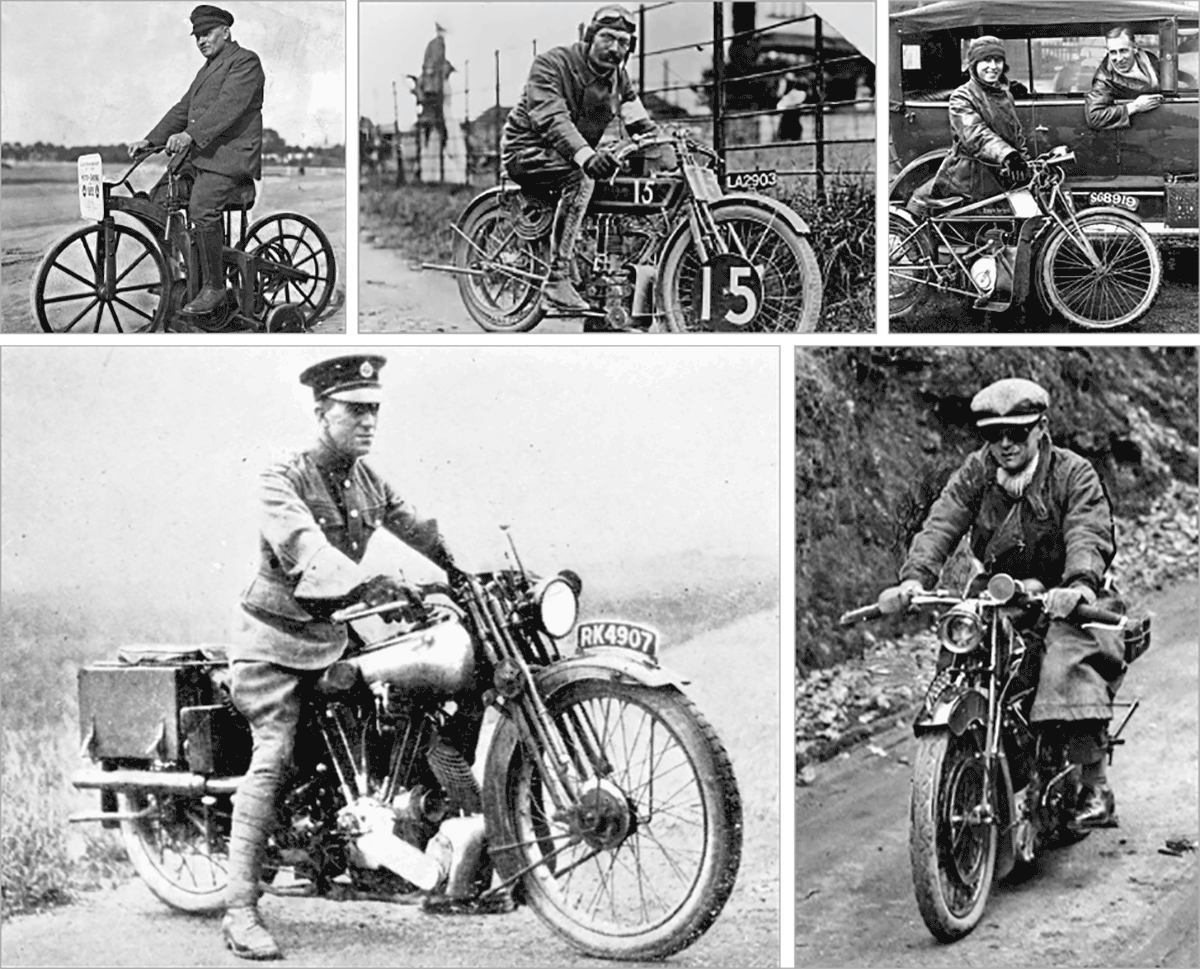 Motorcycling 1900 to 1945: The Pioneers. Images courtesy of www.mortonsmediagroup.com

Of course, he is inextricably linked with the Brough Superior marque. Brough was the Rolls Royce of the motorcycle world, and when Lawrence bought his first machine in 1922, it cost more than the price of the average house. They were custom built to the customers' specifications. Each bike was built twice, and then tested at over 100mph, before being personally certified by George Brough.

Lawrence was on his eighth Brough when he had a crash near his cottage in Wareham in Dorset. He was undoubtedly travelling quickly on the narrow road; he swerved to avoid two boys on bicycles, and was thrown over the handlebars, resulting in serious head injuries.

His death was to have a serious impact on what motorcyclist would wear in the future.

During this time, there was really no such thing as proper motorcycling wear. Clearly, there was a desire to stay warm and dry on the bike, but rarely did matters get more extreme than a pair of riding boots, a tweed suit, a rearward facing cloth cap, goggles and gloves.

In the wet, it might be an overcoat of some description; perhaps even something used by fisherman and sailors of the day. Barbour had created a one-piece wax cotton suit that was aimed at aviators and motorcyclists alike, but it did not become the four pocket belted jacket that we know today until after the Second World War.

Leather jackets were also starting to become available for motorcyclists in this period. Leather had become the 'de rigeur' for aeroplane pilots who wanted to be protected from the cold and the rain, and so it did not take long for motorcyclists to adopt the same uniform.

American maker Schott lays claim to producing the first ever specific motorcycle jacket, which they produced in 1913. Racers of the day also started to wear leather jackets and trousers, and long riding boots, to protect them in an event of a high speed spill. The first recorded instance of a specific motorcycle helmet was at Brooklands in 1914, when the medical officer, Dr. Eric Garner, got a Mr Moss of Bethnal Green to make up canvas and shellac helmets stiff enough to stand a heavy blow.

But it was Lawrence's death that led to the adoption of the now legally required crash helmet by roadriders. One of the doctors who attended Lawrence after his crash was neurosurgeon Hugh Cairns, who consequently began a long study of the death of motorcycle despatch riders through head injuries.

His research led to the compulsory use of crash helmets by military riders, although they did not become a legal requirement for civilian riders in the UK until 1973.