Let’s talk first about Bering, because Bering hasn’t always been a Motolegends kind of brand; and in some respects it still isn’t. But the brand is owned by the huge Trophy group that includes Shark helmets and Segura within its portfolio. And what this means is that, if Bering wants to go upmarket and become a player in the technical world, they have the commercial clout to make it happen. And this seems to be the direction in which the company is travelling.

Bering has historically not been a high-end player in the technical arena, but the financial might of its parent company means that if it wanted to step up it would have the financial wherewithal to do so.

Obviously, these days, laminated jackets are very much in vogue; and because the waterproof membrane is bonded to the inside of the external fabric, they do perform better in the rain in certain respects. The new Tijuana jacket from Bering, obviously, is a laminated jacket. It’s actually a two-layer laminated garment, and the membrane comes from Gore-Tex.

As an aside, we still hold to the view that laminated jackets are not for everybody; and for many, indeed perhaps even most, motorcyclists a good-quality, drop-liner jacket like the Halvarssons Wien will actually be a better option. We have, by the way, an article on the internet all about laminated garments, so if you want to better understand the differences between a drop-liner construction and a laminated one, click here.

Bering has historically not been a high-end player in the technical arena, but the financial might of its parent company means that if it wanted to step up it would have the financial wherewithal to do so.

Given what I’ve already said about the Bering brand, you might understand that they have not necessarily been the go-to brand when talking about high-end laminates. This having been said, the Tijuana does not represent the company’s first appearance at this particular rodeo. They already have two laminated jackets in their range: the Yukon and the Balistik. They are both nice enough jackets, although one point I would make is that we have barely had any warranty claims on either. These jackets are clearly well made, and certainly they work the way they should insofar as waterproofing is concerned.

The Tijuana, nonetheless, is a step up for Bering. This is a jacket that bears comparison, in many respects, with some of the best on the market. Let’s briefly run through the spec..

It comes fitted with CE armour in the elbows and shoulders. And it’s pretty soft and comfortable armour. It’s not D3O, but it feels nice to wear. There’s a pocket for a back protector. The jacket is veritably festooned with adjusters, straps and zips to help you get a good snug fit, and to make sure that it works the way it should. There’s an adjuster at the neck to enable you to alter the size of the neck hole. Velcro straps on the sleeves enable you to decrease or increase the sleeve volume. If you remove the thermal liner, for example, you might want to tighten the straps to stop the material flapping in the wind. There’s a handy set of adjusters on the flanks to allow you to cinch the jacket in at the waist, and an elasticated drawstring at the hem. The cuffs have both zippers and Velcro flaps; and this is what we would expect. Undo the zip, loosen the Velcro strap, put the cuff of the glove inside the sleeve, close the zip, then tighten the Velcro strap. That’s how it should be done. You also get zipped gussets at the hem. And this is an important consideration on a longer jacket. If you don’t have these, you find that when you sit in the bike, you’ll be putting pressure on the hem line. This is uncomfortable, puts pressure on the zip, and can cause the jacket to ruck up.

The Tijuana ticks all the boxes. Loads of size and fit adjusters. Comfortable armour. A removable, thermal liner, and loads of pockets. As a laminate jacket, the vents are going to be particularly effective.

Venting on a laminated jacket is better, in theory, than it is on a drop-liner jacket because, once there’s a zip in the outer material, there’s no waterproof membrane to get in the way of the air flow. The Tijuana has two vents on the outer extremities of the chest. These are covered with a water-resistant zip and a storm flap, so they won’t be a weak point for water ingress. There’s a large exhaust vent across the back.

The Tijuana is a good-looking jacket. It’s light, and easy to wear and wants for nothing.

Pockets on the Tijuana are not in short supply. The four on the outside of the jacket are all side entry, protected by waterproof zips. There are loads more pockets inside the jacket. In theory, all the outer pockets are waterproof but, in practice, we would always put valuables into one of the internal pockets.

We really like the collar adjuster that allows you to get a better fit around the neck.

For warmth, not an inherent strength of a laminated jacket, you get a pretty basic, full-sleeve, hollow-fibre, thermal liner. It’s okay, but nothing out of the ordinary. If you’re going to be doing a lot of winter riding in this jacket, you would probably want to upgrade. There’s nothing better than our Warm & Safe, of course.

So far so good. It sounds like a competent jacket that ticks all the boxes. But there are some factors that cause it to rise above the melee. First, obviously, it’s a Gore-Tex jacket. Any jacket that uses a Gore membrane has to be made properly; and indeed the design and final prototype have to be inspected by Gore before it goes into production. This means that the Tijuana will work. It is this that gives a company like Bering the confidence to back the Tijuana with a five-year warranty. Check it out, but most manufacturers still only give you one or two years. If you do a lot of mileage, a warranty this long really is worth paying a little extra for.

But there’s another feature of the Tijuana that stands out. And it’s the jacket’s comfort. It’s one of the most comfortable laminate jackets on the market. It’s only really matched by the Rukka’s Nivala. Now the Nivala is exceptional, and that’s because there’s stretch woven into the outer fabric. But the Nivala is two and a half times more expensive than the Tijuana.

Before he recorded his review Chris tested the Tijuana. He reckoned it was one of the most comfortable laminated jackets that he had ever ridden in; this side of the much more expensive Rukka Nivala. Unfortunately he wasn’t quite so complementary about the supposed matching pant!

But there’s no such thing as a free lunch, as they say. There’s no such thing as a perfect jacket; so what are the problems with this jacket? Well, in truth, our issue with the Tijuana is not so much the jacket itself as the pant to which it is meant to be attached. Obviously the Tijuana has a full-length zip that allows it to be attached to a Bering pant. But Bering has not produced a dedicated Tijuana pant. They recommend pairing it with their Yukon pant. Now the Yukon is also a two-layer, Gore-Tex laminated affair, so there’s no problem there. But it’s not a great pant. It’s a bit shapeless, a bit vin ordinaire. But crucially it comes only in a single, regular, leg-length. And that simply doesn’t cut it in the rarified atmosphere where the Tijuana aims to exist. If you’re short in the leg, the pant will drag along in the dirt. If you’re long in the leg, the pant will rise half way up your calf and make it easier for water to get into your boot. Well, that may be acceptable on the other side of la Manche. Mais ici? Certainament non! It’s as though Bering’s designers exhausted themselves so much creating this jacket, they had no energy left when it came to the pant. I’m afraid, Bering, your current solution just isn’t good enough. As they used to say in my end-of term reports: ‘Could do so much better’!

So, where do we get to? We love this jacket. It really is very good. But we wouldn’t pair it to the Yukon pant. If you do want to zip in, come and see us, however. We can easily create a connector zip that will allow you to connect the jacket to a Halvarssons, a Richa or even a Rukka pant. Of course, if you want to wear a laminated jacket over a pair of Revolution jeans or a pair of Rokkertechs with Scott waterproofs, then this is a jacket you must look at. As a standalone jacket, it really is rather special. 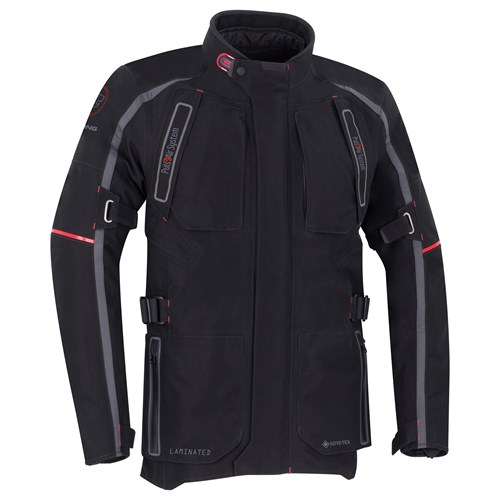 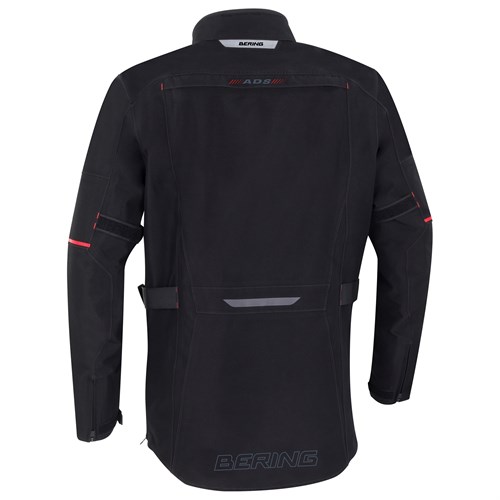