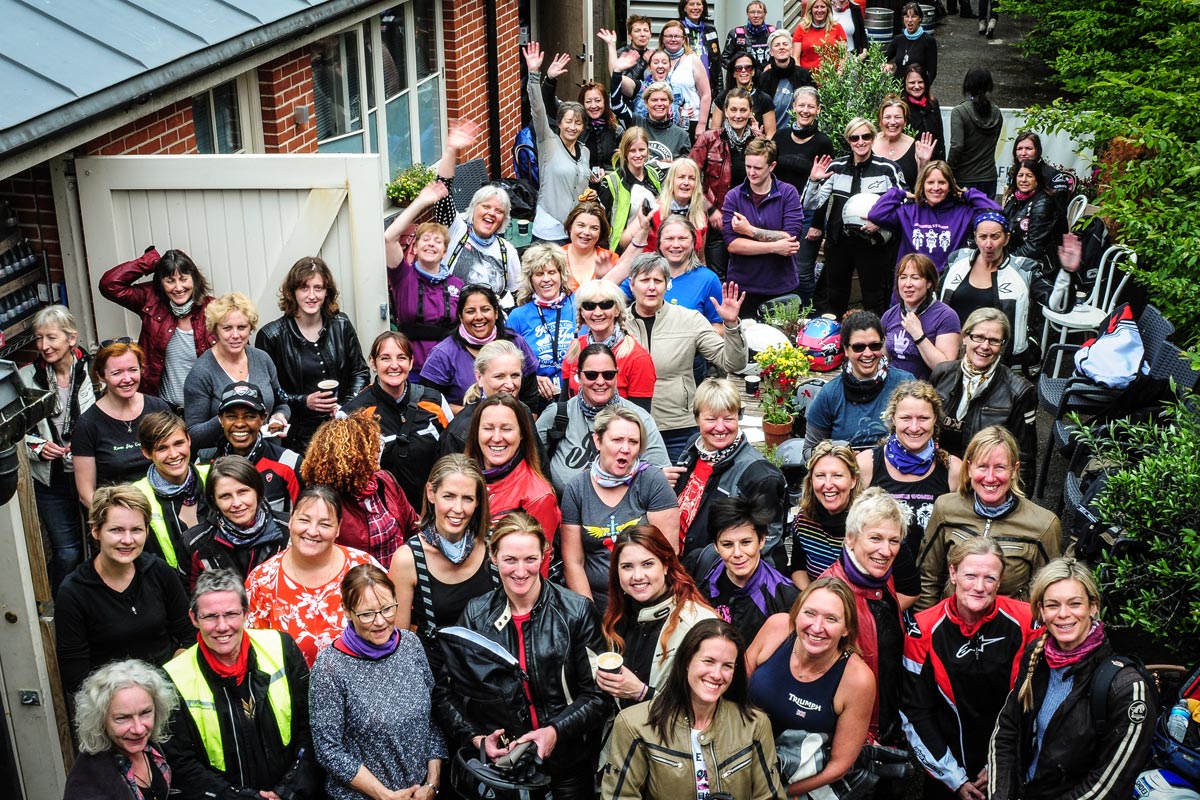 I cannot for the life of me remember why we were there but, back in February, Chris and I found ourselves at the Hauser & Wirth art gallery complex just outside Bruton in Somerset. The weather was amazing. The middle of February it might have been, but it was actually warm, and we took an outside table at their restaurant for an impromptu bite.

Over lunch we discussed what a great destination this would be for a ride out. We had been looking for ways to build on our ladies’ ride to France last year, and Hauser & Wirth seemed perfect. We spoke to the manager, who didn’t seem perturbed by the notion of dozens of lady bikers invading their rural idyll. She even offered us the exclusive use of the Roth Bar and Grill’s expansive covered terrace. And so the train was set in motion. 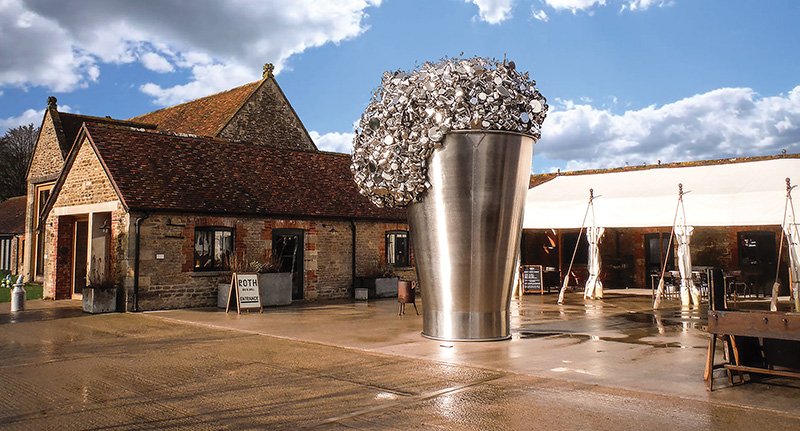 This is the covered terrace for Hauser and Wirth’s splendid restaurant: the Roth Bar and Grill. They very generously let us have exclusive use of it for our lunch.

We announced the ride in an email bulletin, hoping to interest 50 souls. Within a couple of days, we had more than 60 takers. A phone call to Hauser & Wirth confirmed that they were happy to take up to 100. Clearly they had no idea what kind of din such a number of ladies could make, but so be it!

For us at Motolegends, our trips and ride outs are not about making money. I suppose they’re about trying to build relationships. But we hate doing these things less than professionally, and so we set about making sure everything would work well on the day.

We ended up recceing the route no less than four times. We wanted to find the nicest roads, but here in the south of England that meant lots of complicated twists and turns where riders might take the wrong road. We were also well aware of the need to stick to a pretty rigid timetable, in the knowledge that some riders would be on smaller bikes, and would never have ridden 250 miles in a day before.

Our route from the shop in Guildford would take us down the A31 to Stockbridge, where we would stop for coffee and a piece of cake. Thence on the B3084 to the A303, before a spirited ride across the Salisbury Plains. Finishing with another junction or two on the A303, before dropping down into Bruton.

Bit by bit, the itinerary came together. We would leave Guildford on the dot of 9.00am, stopping for coffee and biscuits at Stockbridge. We’d need to be there at 10.30am, and to leave an hour later, in order to get to Bruton for our 2.00pm lunch appointment.

We found a great café in Stockbridge called Coffee Lab. They had a garden space that could accommodate us all, and were confident that they could feed and water us all inside an hour. But they only had a couple of loos, so we arranged for an extra four portaloos to be put in the garden; just in case!

In the weeks and months leading up to the big day, we were approached by a number of bodies wanting to marshal the ride. They were keen to know what ‘system’ we were going to use, and it was suggested by some that we have two outriders or guides for every ten riders.

We desperately didn’t want our ride to turn into some kind of parade, but the final straw for us came when somebody suggested that it would be distressing for a lady biker if she took a wrong turning. Biking is meant to be fun, and an adventure, and we weren’t going to be herded like cattle, by people with whistles and hi-vis vests. We decided we’d do this our way.

In the week before the ride, the weather forecast wasn’t encouraging, but as the weekend approached the prediction had changed. In the final analysis, the weather gods favoured us. It wasn’t going to be a bright and sunny day, but it was still warm, and on the day we never saw more than a few spots of rain.

On the morning of the ride, almost a hundred bikes were parked up in the car park at our offices in Guildford. The diversity of machinery was impressive, but not so impressive as the general level of excitement and anticipation. A ladies’ ride out is different to a men’s one. Egos don’t seem to enter the equation. Everybody is friendly, everybody is supportive, and even before we get underway it’s clear that people who have never met before are starting to form bonds and friendships.

From about 8:00am, the car park at Motolegends started to fill up. Everyone arrived in good time such that, at 9:00am on the dot, the first bikes started to roll out.

At 9.00am sharp, the intrepid, the indubitable, the indomitable Elspeth Beard leads out the first group. We had created about half a dozen groups, and each departed a couple of minutes apart from one another. By 9.15am the car park is empty, and Graham, a stalwart of our ladies’ rides, drives off in pursuit in the back-up van, ready to rescue anyone in need of roadside assistance. 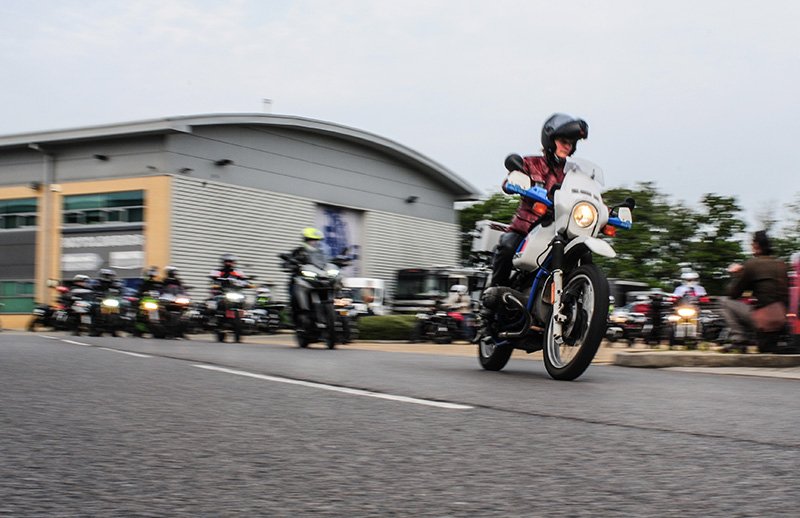 Once again, Elspeth agreed to be our mascot for the day and so, fittingly, she led out the first group of about a dozen riders. Groups of about the same size left every couple of minutes after that.

Having simplified the route in the previous weeks, the run to Stockbridge took less time than we had anticipated, and by a little after 10.00 am everybody has a flat white to wash down their chocolate brownie. 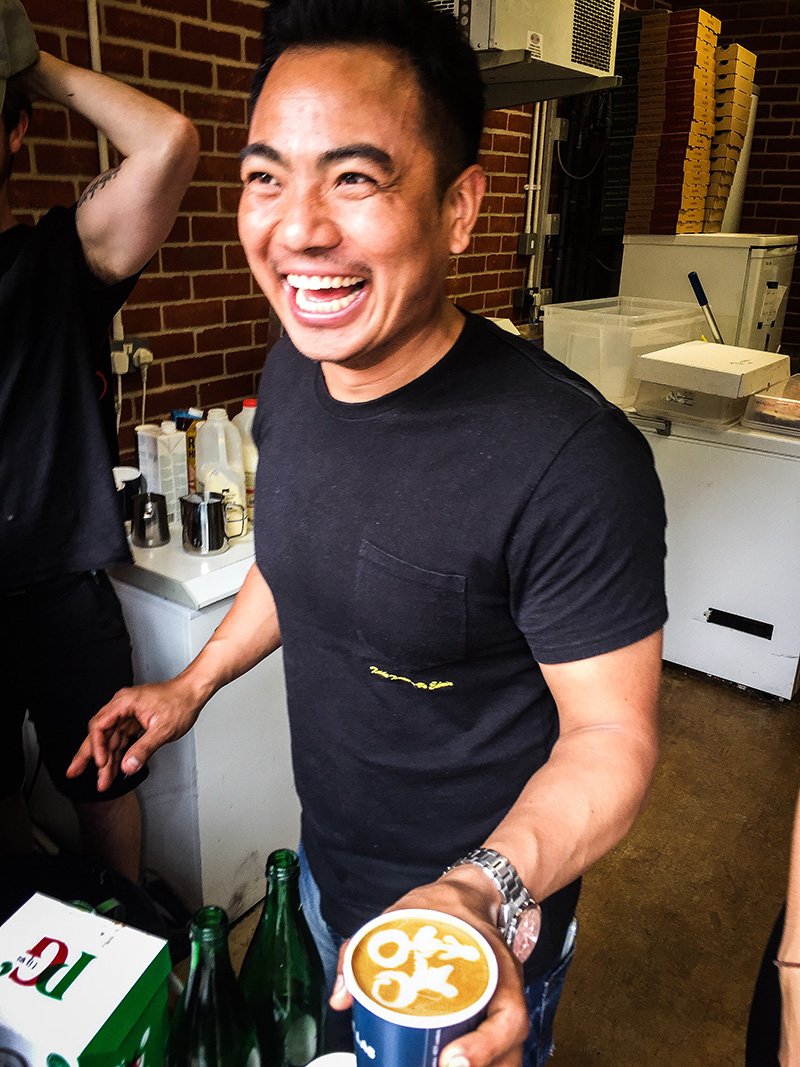 Dhan Tamang; our barista for the morning.

Coffee Lab had acquired the services of a ‘celebrity’ barista for the day. He did a great job, and was even able to create a motorcycle design in the crema of our coffees. But everyone played their part, and a little over an hour later, refreshed, watered and relieved, we were all back on our bikes, leaving Stockbridge the tranquil and picturesque village high street it had been before our arrival. 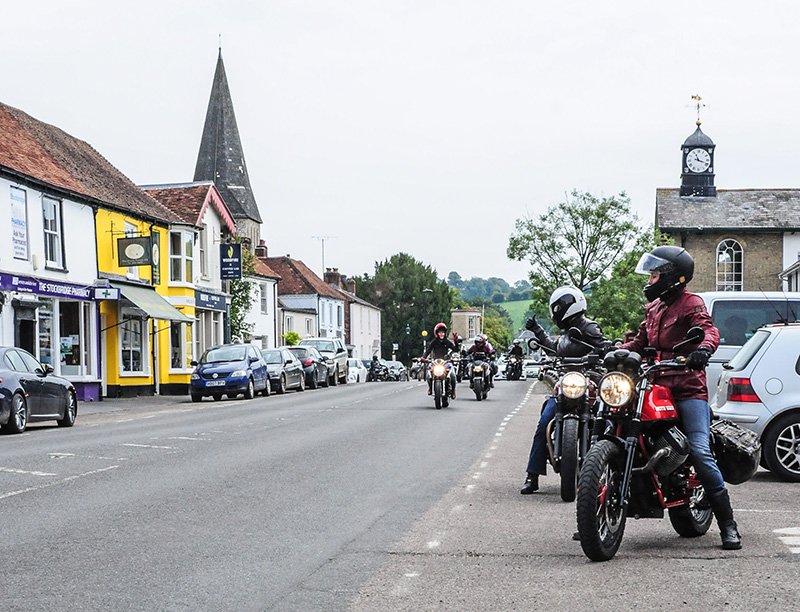 Stockbridge didn’t really know what had hit it, as a hundred, thirsty, lady bikers rocked up at the Coffee Lab for a quick Flat White and a chocolate brownie. The café handled our pit-stop with Formula One-style precision, not to mention a dose of good humour.

We had done our best to find quiet roads for the second half of our ride, and the Salisbury Plains did not let us down. Nobody, of course, broke the speed limit, but the roads were flowing and, as the Police say, we made progress. In the final analysis, whilst we were confident that all our ladies would find their way to our final destination without drama, it may be that even we underestimated how swiftly the ground would be covered.

Again, we arrived at Houser & Wirth’s splendid facility a little early, but no harm in that. It gave these who were so minded the opportunity to explore the gardens and visit the most recent exhibition; coincidentally, all about women artists. It was almost as though it had all been planned!

Lunch was a sumptuous offering. Simple, but of the highest quality, with a level of service and attention to detail to match. Many chickens were sacrificed in our honour; they were followed by a salted caramel, chocolate mousse. Copious amounts of lemonade and coffee helped wash it all down. 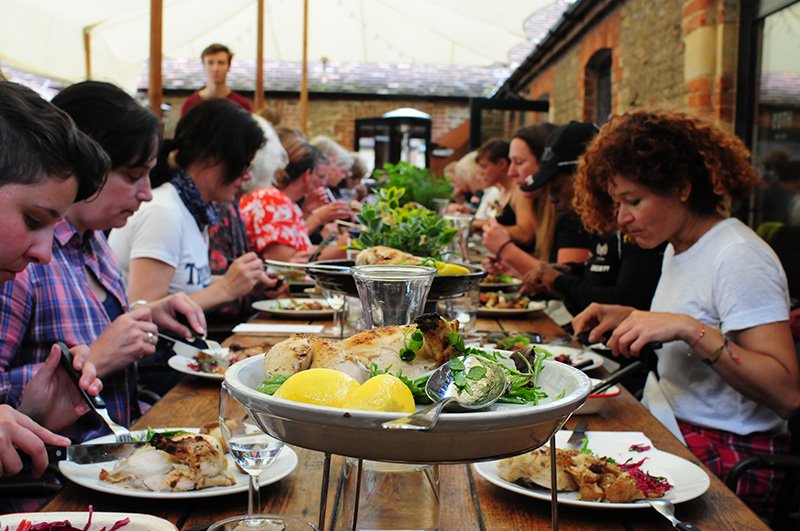 Lunch was a great success. The formula was simple; barbequed chicken with an assortment of salads. But it was beautifully prepared, and the service was outstanding. Salted caramel mousse to follow. Don’t think anybody left hungry. Or unhappy; as you can see.

Now, at this point, I want to interrupt proceedings with a little commercial break for Hauser & Wirth. From our very first dealings with them, these guys epitomised hospitality. When we first spoke to them, we were concerned about admitting that our group would be a group of bikers. Would they be happier if they thought we were a coach party, we wondered?

We decided to be totally upfront, but it didn’t faze them at all. Bear in mind that this is basically an art gallery and refuge situated on the edge of the picturesque and tranquil village of Bruton. It is a haven of peace and calm. But they never demurred, in the way that many such establishments might have done. 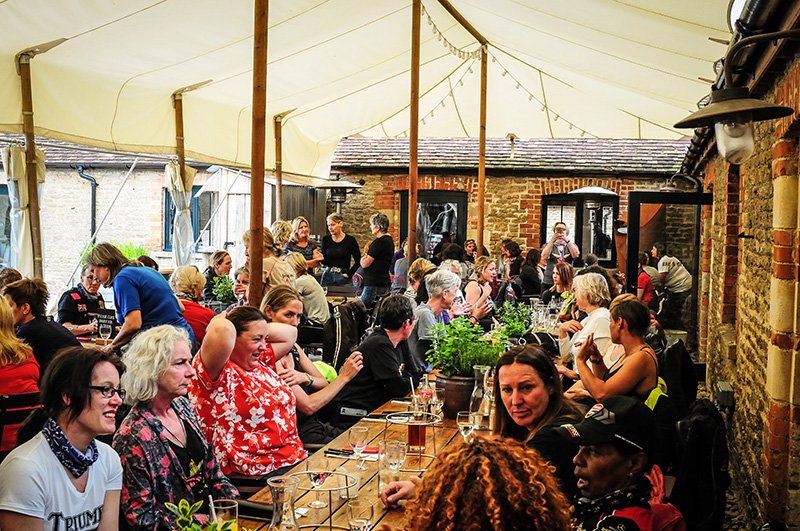 Their facility is beautiful. It’s a fantastic place to visit, even if all you want is a place to stop for a coffee and a walk to stretch your legs. They made us feel totally welcome from the moment we got there to the moment we left. We really wanted to thank them. I’ve no doubt we would have had a great day wherever we ended up, but it’s hard to imagine a nicer, more welcoming reception than the one we received.

This is our group giving the camera a wave after the wonderful lunch laid on by the Roth Bar and Grill. If anybody was unhappy, they really did hide it well!

Getting home was always going to be a less structured affair, but we knew that our groups would look after one another. That’s just the way it is with a ladies’ ride.

For the return leg, the idea was to keep it simple. The A303 to the A34. The A34 to Winchester, and then the A31 to Guildford, although of course not everybody was going home to the same place.

Predictably, on a Sunday evening the A303 was blocked around Stonehenge. Those who knew their way took different routes home. Whilst those who had never filtered before quickly picked up a new skill. None of this spoiled a great day. Of course, with our Motolegends hat on we were pleased and thankful that everything seemed to go smoothly. When you arrange a day like this, there’s always a fear that something can go wrong. But from the emails and cards we received in the days that followed the ride it would seem that many people had a great time.

New friendships were forged and, for many, the day will have built sufficient confidence to get back on the bike and travel further afield.

We’d like to congratulate those who came along on their 125s. We knew that they would be looked after by everybody, but it was brave anyway.

Sheer admiration, however, goes to a lady by the name of EJ who signed up even before she had started to learn how to ride. But she was determined not to miss out. Just in the nick of time, she passed her test on the Friday before the ride. She bought her bike on the Saturday, and took it out for a first ride that afternoon. She rocked up at 8.00am on the Sunday, and a huge grin didn’t leave her face all day. When she returned to HQ at about seven that evening, she was riding like an experienced pro. She epitomised the cheerful spirit of the day.

All we need to do now is come up with a ride for 2020. The good news is that plans are already afoot. 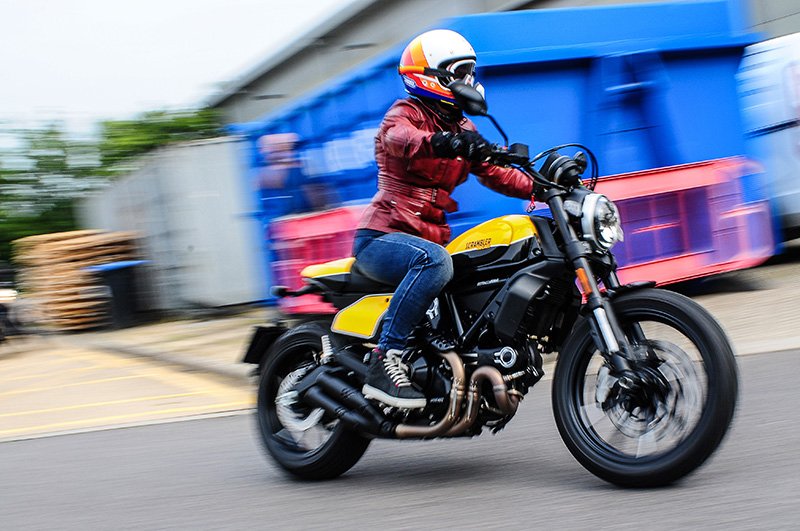 This is EJ. She booked on the ride before she had even taken her first lesson. She passed her test two days before the ride, and picked up her new bike on the Saturday! That’s what we’re talking about!