The original Shark Evoline modular helmet was first launched in 2008. It was, in some ways, an evolution of the Boxer helmet that had originally been released by Claude Morin’s Roof concern about a decade earlier.

The Roof Boxer was the first helmet that was homologated for use both open and closed..

Like the Roof, the new Shark featured a 180° rotating chin bar that could be raised from its forward, closed position, to lock into place at the back of the helmet. It made for a helmet that, in some ways, gave riders the best of both worlds. In the closed position, you had a proper full-face helmet. Rotate the chin bar around to the back of the helmet, and you got what was pretty much a traditional open-face helmet. And, of course, in this regard the helmet was much more useable than a typical flip-lid which, frankly, was never designed for riding in the open position.

The Shark was always a more serious proposition than the Roof. The Roof was much more suited to urban riding, and indeed it became hugely popular with urban commuters and couriers. It looked cool as hell, but it had a very particular fit that didn’t work on everybody, and even when the chin bar was closed it was a noisy helmet. It wasn’t the kind of helmet you wanted to do big road miles in. The Shark, by contrast, was much better for riding on the open road. Okay, in terms of quiet, it was still no Schuberth, but it was good enough. Raise the chin bar, and you got a very useable open-face with particularly good protection around the jaw and chin. In fact, the Shark was, and still is, about as protective as an open-face ever could be. Many continental Police forces, especially the French, adopted the Evoline as the perfect tool for their particular role. They could bomb down the Autoroute at three figure speeds with all the protection of a standard full-face, but having caught their prey they could raise the chin bar to tell the poor hapless motorist why they were being given a ticket!

The Shark is still hugely popular with this who commute into the big European cities.

In 2016, however, Shark effected a major upgrade. The new helmet was called the Evo-One, and it incorporated a number of improvements over the old Evoline. The tolerances throughout were much finer. On the new helmet, when the visor was open, it sat much closer to the shell, for much less wind resistance, for example. Shark was inordinately proud of the fact that the new helmet had, apparently, been reverse engineered!

But the biggest change was to the visor mechanism itself. Now, on the old Evoline 3, if you wanted to bring the chin bar from the rear position round to the front of the helmet, you had to first raise the visor. If you didn’t do this, the chin bar would catch on the visor. In retrospect it wasn’t, perhaps, a major issue, but Shark felt it was an inconvenience too far, and so they set out to create a new mechanism that overcame the problem.

On the Evo-One, when you brought forward the chin bar, the visor raised automatically.

And so, on the new Evo-One helmet a complicated system of internal levers and cams meant that when you raised the chin bar from the back of the helmet, the visor raised automatically, allowing the chin bar to clear it without contact. It was a clever system. The engineering challenge was not insignificant, and Shark’s solution was both clever and elegant.

But there was a problem. The mechanism was temperamental, meaning that the chin bar sometimes got stuck. Equally, it could be difficult to close; to such an extent that Shark attempted to issue instructions explaining how owners should close their helmets. Nothing confirmed the existence of a flaw in the design of the helmet more than those instructions!

But, actually, the bigger problem was that the improved tolerances were so fine that the Pinlock, when fitted to the inside of the visor, had a tendency to rub against the brow of the helmet. It created marks on the surface of the Pinlock right in the middle of the line of sight. Shark was sometimes able to make adjustments to a helmet to resolve the issue, but they were not always successful, and many people simply returned their Evo-Ones for a refund.

Some 18 months after the Evo-One was released, Shark released the Evo-One 2. Better, but not perfect.

Some 18 months later, Shark introduced a new version called the Evo-One 2. On the new helmet, the problems had apparently been resolved, but whilst the new helmet was certainly an improvement, not all of the problems were eradicated. It was a better helmet, but not a perfect one. The main issue was still the Pinlock.

The Evo ES was designed to overcome the issues experienced on the Evo-One.

More recently it has come to light that the engineers who originally developed the Evo-One never really wanted to incorporate a Pinlock. Apparently, it was the marketing people who insisted that the helmet had to be equipped with an anti-fog visor. They felt that, in a premium helmet, the market demanded a Pinlock.

Well now the engineers have had their wicked way. They have developed another variant, called the Evo ES, with a particularly high-quality visor that has a heavy-duty, anti-fog coating. This is the helmet the engineers had originally envisaged, and always wanted to produce.

The Evo ES has no Pinlock visor, so gone are all the scratching issues. It’s also a less expensive helmet.

But Shark’s management wanted to create clear blue water between the Evo-One 2 and the Evo ES, and so they have reduced the price across the variants of the Evo ES by around £90 vis-à-vis the Evo-One 2. Now this is not, in our view, a reflection of a lesser helmet. In fact, quite the reverse, we think this is a better helmet than the Evo-One 2.

Of course, losing the Pinlock will have allowed Shark to make a cost saving on the new helmet, although the upgraded visor will have added to their cost. Shark will have made some more savings by removing some of the bling trim from the helmet, but the reality is that Shark has simply made the Evo ES cheaper than the Evo-One as a way of winning back customers and goodwill.

Now, we’ve done a fair amount of testing in the Evo ES. We’ve ridden a lot of miles in conditions that are likely to test the visor’s anti-fog coating, and we have to say that it has stood up pretty well. There’s now no Pinlock, so it cannot work itself loose, and of course there’s no rubbing of the anti-fog insert against the helmet. In extreme conditions, we were able to induce some light condensation on the inside of the visor, but it didn’t fog up. It created condensation that simply ran down the visor, barely impeding visibility. We cannot promise that you won’t ever get any misting on the inside of the visor, but we reckon that it will be very rare indeed, and if it does happen, opening the visor for a couple of seconds will quickly remedy the situation.

And here, we might make a point, a philosophical point even. Motorcycling is a passion that invokes extremes of experience. Extreme heat. Extreme cold. Extreme wet. It cannot be compared to driving around in a Beemer with the air conditioning cranked up. There are times when motorcycling will be uncomfortable and inconvenient. If you really cannot bear the possibility that, very occasionally, you may experience some condensation in your helmet, it may be that motorcycling isn’t for you!

For our part, we like the Evo ES. Occasionally, the simpler solution is the better solution. The modular concept developed by Shark was always a strong one. The latest incarnation is, in our view, the best. The helmet simply works. It still won’t be right for everybody, because it has a very particular fit, but if you want one helmet that delivers total open-face as well as total full-face functionality, then there’s nothing out there that compares with the Shark. And the fact that you can now buy into the concept for just £270 makes it a helmet that no biker can afford to ignore.

The Evo ES comes in a whole new range of colourways, all of which we carry.

Here at Motolegends we’ve decided to drop the Evo-One 2 completely, in favour of the ES. We think simply that it’s a better helmet. We carry all the colourways in stock, but if you want to work out whether this helmet really is for you, we still think a visit to Guildford might pay dividends. We’ll tell you if it fits you the way it should, and if it doesn’t we’ll play around with the interchangeable cheekpads to try and make it work. And this is important because, if it fits you well, it’s a darned good helmet. Period. 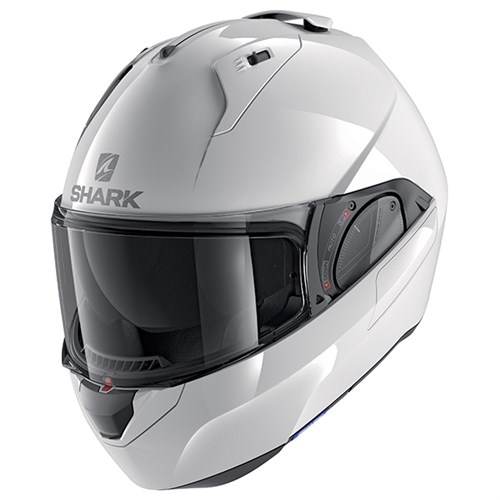