We send out our Pussycat email catch-up bulletins most weeks, although sometimes the gaps between them are longer. Now below, we are featuring a number of products, some of which are new, some of which are not so new. Now, this week most of the products shown have videos attached. This won’t always be the case. If you want to watch any of the videos that’s fine by us, but equally, you can simply click on the BUY button and go straight to the relevant page on the website. Up to you! 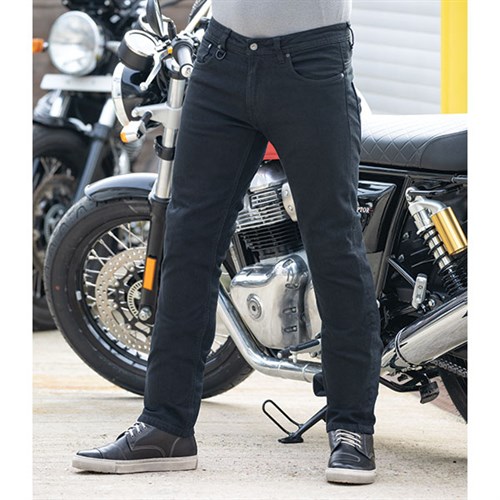 Confusingly, here at Motolegends we have lots of favourite motorcycle jeans. For hard riding at higher speeds we’d probably plump for a pair of Rokker Rokkertechs, especially if price were not an issue. But for local and around-town riding, our favourite jeans are probably Spidi’s single-layer J-Trackers. They are incredibly light and easy to wear. The adjustable armour can be removed by means of an external zip if required. They record a slide time of just over two seconds. They are classified as an A rated jean under the latest EN 17092 regulations, but would have been classified as AA had Spidi elected to supply the jeans with hip armour. There is not a nicer, more comfortable jean on the market, but until now they were only available in blue. That is no longer the case. They now come in black too.
Buy now

No two ways about it; we’ve got a bit of a bromance thing going on with Richa these days. We’re particularly excited by their gloves. On many of the gloves we’ve selected the spec. is extraordinary, yet they’re priced like ordinary gloves. The new Warm Grip glove, which is exclusive to Motolegends by the way, is a laminated Gore-Tex glove with lots of insulation on the back of the hand, but not a lot on the palm. This makes them particularly well suited to those who have heated grips. As Chris explains, they also happen to be amazingly comfortable, and incredibly well priced.
Buy now

There’s nothing new about Rokker’s chinos; they’ve been around for years. They’re a single layer pant, and they’re super smart with a near-military cut. They have a slide time that is about 50% better than leather. They take D30 armour in the hips and knees, and even deliver a degree of waterproofing. What is new is that Chris has done a video about them. If you’re looking for a riding pant that’s a step up from jeans in terms of presentation, they might just be what you’ve been looking for. If you’ve got a few minutes, you’ll be in a much better position to make a judgement after you’ve watched the video.
Buy now

There’s been a Crosby in the Belstaff range for a number of years. It is a mid-length jacket that sits somewhere between the longer Trialmaster and the shorter Mojave blouson-style jacket. Over the years the Crosby has been available in a variety of weights and colourways. But recently a new version was released by Belstaff. It is the first-ever CE-approved version. It’s made from a brand new technical wax cotton that Belstaff has developed in conjunction with British Millerain. In this video, our chap in the cap tells you everything you could possibly want to know about this latest iteration.
Buy now

Motolegends is a little late to the party as far as video reviews are concerned. Bizarrely, we did some about five years ago; for some reason we just gave up on them. So right now, we’re playing a game of catch up. In this review, Chris walks us through our favourite classic off-road style helmet: the Shoei Ex-Zero. Now the Ex-zero, of course, is very much a road helmet. It’s basically an open-face helmet with a protective front piece that will enable you to hold on to your chin if you have an accident. There are similar-looking helmets on the market, but from a comfort and technicality perspective, the Shoei is by far the best. In this review, Chris explains all, but he also showcases a new goggle from Klim that seems to fit the Ex-Zero like a glove.
Buy now

You may never have heard of PMJ; indeed before last year we hadn’t either. But they came to see us in 2019, and we ended up collaborating with them on a new, single-layer jean for men. But when they were with us, Sara asked if they might be able to develop a lighter weight legging for lady riders and pillions. There are loads of leggings out there, but most of them are pretty hot and heavy. Well recently PMJ delivered the legging to us. They’re so nice. They are light and stretchy, yet still impressively protective, although you’d never think it to look at them. In fact, under the latest CE regulations they are rated as AA. Called the Spring leggings, they come with both knee and hip armour. Okay, they may not be perfect for this time of year, but in a few months’ time these are going to be the leggings you want. In this review, Sara tells us about the brief she gave to PMJ, and what she thinks to the end product.
Buy now

We love single-layer jeans; heck we were the poster boys for single-layer jeans before anybody even knew what they were. Well now, everybody is jumping on the bandwagon. Certainly, for our part, we’re not really interested in marketing traditional, lined jeans any more. And so Chris thought it might be opportune to deliver a state of the nation address on the single layer marketplace. As ever, it’s a confusing picture because already there’s a myriad of styles, fits, colourways, and fabrics. Some are expensive, whilst some are relatively cheap. They all also deliver different levels of protection. Well Chris is our jeans guy, and so in this review, he shows us a whole panoply of single-layer jeans. It’s all interesting stuff, but typically Chris doesn’t like to leave any stone unturned, so if you want to be put in the picture, you are going to need to set aside a bit over 30 minutes. If you can find the time you will be rewarded.
Watch now

The Schuberth C3 was a classic that dominated the flip-lid arena for more than a decade. When the C3 Pro was released, the price of the C3 was lowered, and it was given a new name. It’s still a really impressive helmet, and at its current price it’s a bit of a bargain. In this video Chris tells us all about the differences between the C3 and the C3 Pro. He also tells us why the old helmet is still a force to be reckoned with. But, as he explains, it’s not going to be around for that much longer. It will certainly sell out at some point over the summer. If you want an all-singing-and-dancing flip helmet for the price of an ordinary helmet, you may need to act sooner rather than later.
Buy now

In this short review, Sean tells us about a baselayer from Klim that takes the form of a classic, button-down collar shirt. He’s dead right that this is a great shirt for going touring in, although somewhat strangely Sean seems to think we have a lot of customers who not only camp when they’re on tour, but that they also light fires by twirling bits of twig between the palms of their hands! It is a lovely shirt to wear whether you’re on the bike or not. In the summer I often wear mine in the office, and here there’s a point that should be made for those who commute into work. Basically, if you  wear a cotton work shirt beneath your technical motorcycle jacket, you are preventing it from doing its job. A membrane is there not only to stop the rain reaching your body, but also to enable your sweat to escape. It is the breathability of a membrane that keeps you dry from the inside. Cotton, by contrast, absorbs moisture; it doesn’t wick moisture and it doesn’t breathe. This is a great shirt therefore for commuting in, and although it might not cut it in the most formal of office environments, it’s also a shirt you could work in all day.
Buy now

In the short video ‘Billy the Boot’ talks us through a boot that we rate very highly. It sits somewhere between a TCX trainer-style motorcycle and what we’d call a full-on, rugged biking boot. Of course, as Billy explains, it’s got all the protective components that you’d want or expect from a motorcycle boot, but it just happens to be about as comfortable as anything you’ve ever slipped your foot into. And this we know from customer feedback. Those who have bought a pair, love them. And, these days, if ever we have a customer in the shop for whom comfort is a crucial factor, this is the boot we tend to direct them to.
Buy now

Halvarssons is one of our favourite motorcycle clothing brands. Their gear is not super sexy, and if you give their design people more than two colouring-in pens, they have an ability to take a really nice jacket and turn it into something that nobody would want to be seen in. But they do make brilliant, really well-priced technical gear. Now, based in Malung in Sweden, which is a famous tannery town, they also have access to to fantastic hides, and the Eagle jacket  is testamount to this. It’s a goatskin jacket. Goat hide is thinner than cowhide, but stronger. It makes for great, lightweight bike gear. Take a few minutes to listen to what Chris has to say. Luckily, as you can, see the design department weren’t allowed many felt-tip pens.
Buy now