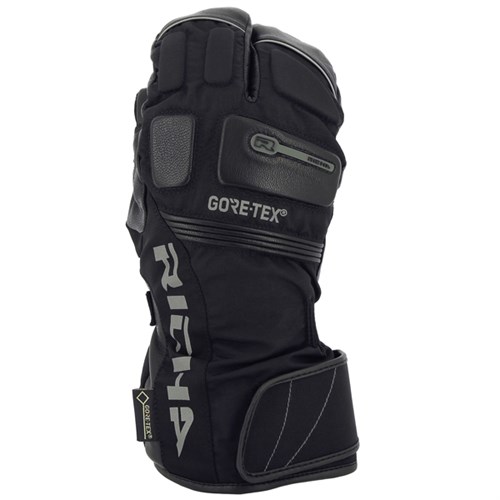 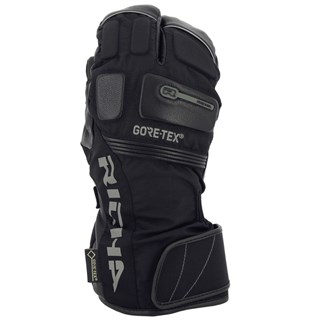 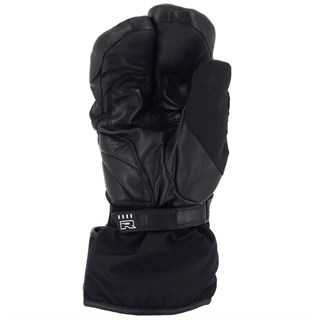 The Nordic is what is known as a three-finger glove. Basically, your thumb gets its own compartment. The other four fingers then go as two pairs into two further compartments. And this is why these gloves are warmer than five-fingered gloves. In five-fingered gloves, each finger is exposed to the elements. The surface area is large and there's not a lot of fat in a finger. As the cold air at 60mph hits the fingers, they can quickly become numb. In a three-fingered glove, the skin on the fingers is less exposed and, moreover, the fingers can rub together to generate heat. Any skier will tell you that mitts are warmer than gloves. And so it is here. If you really feel the cold, go for something like the Nordic GTX. The waterproof and windproof membrane is by Gore-Tex, so these are not gloves you are going to get wet in. For warmth, they contain Primaloft insulating wadding and a fleecy lining. The Nordics have a dual-chamber facility. Now, we have to admit that we're not believers in the benefit of this form of construction, because we simply cannot see why and when you would put your hand in the upper compartment. This having been said, in the lower compartment these gloves are going to be particularly effective with heated grips, because all the insulation will be on the back of the hand, whilst the lack of insulation on the palm will allow a better transfer of heat from the grips. Much of the other stuff on the Nordic is as you would expect. Nyspan textile material on the back of the glove, leather in the palm, two Velcro adjusters and so on. They've also got a built-in visor wipe. But what the Nordics have that many gloves of this ilk do not have is a shock-absorbing knuckle protector. Where we get to is this. We reckon this is one of the warmest gloves you will ever wear on a bike, this side of an electric glove. Some people don't like three-fingered gloves, because they look a bit wierd. Fair enough; look really cool, just have colder hands!
Read more