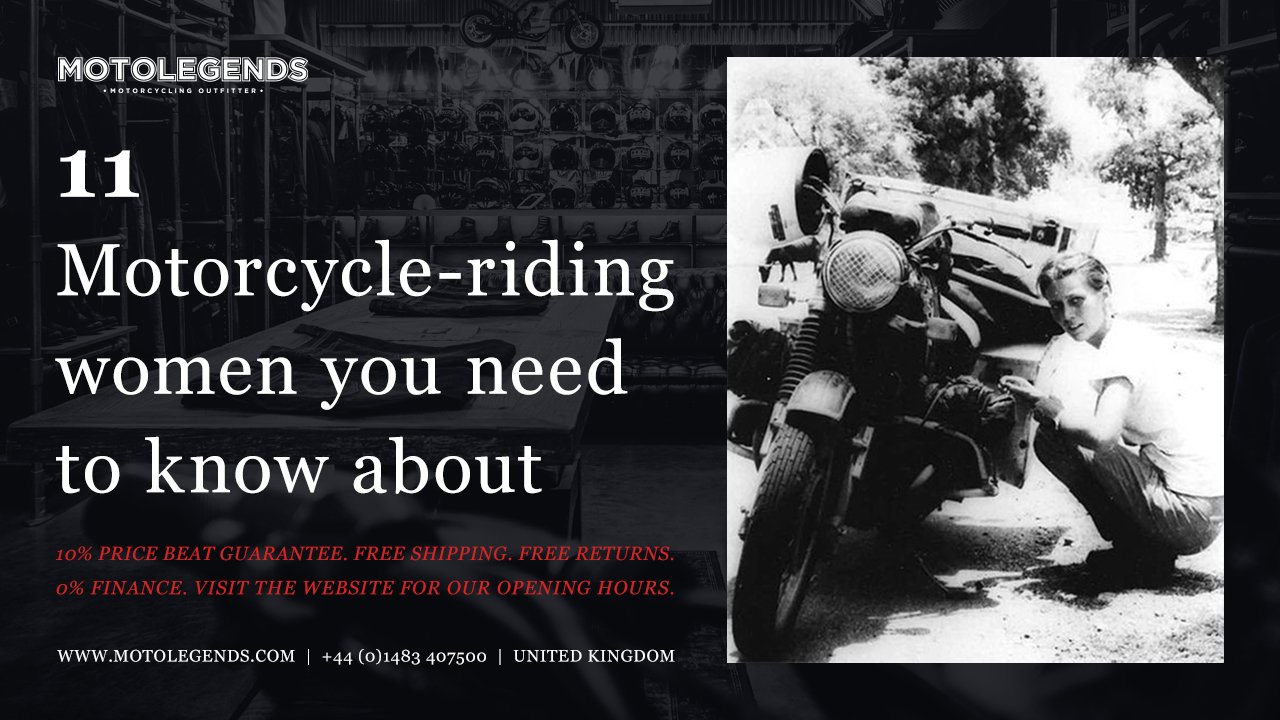 This International Women’s Day, we’re shining the headlights on the women who have made an impact on the motorcycle industry - an industry traditionally dominated by men. From pioneers to pros and stunt women, here are eleven of the coolest female riders of all time.

The Inspirational Women in The Motorcycle Industry

Here are the eleven women who have changed the face of the motorcycle industry and made a difference for female motorcyclists around the world. 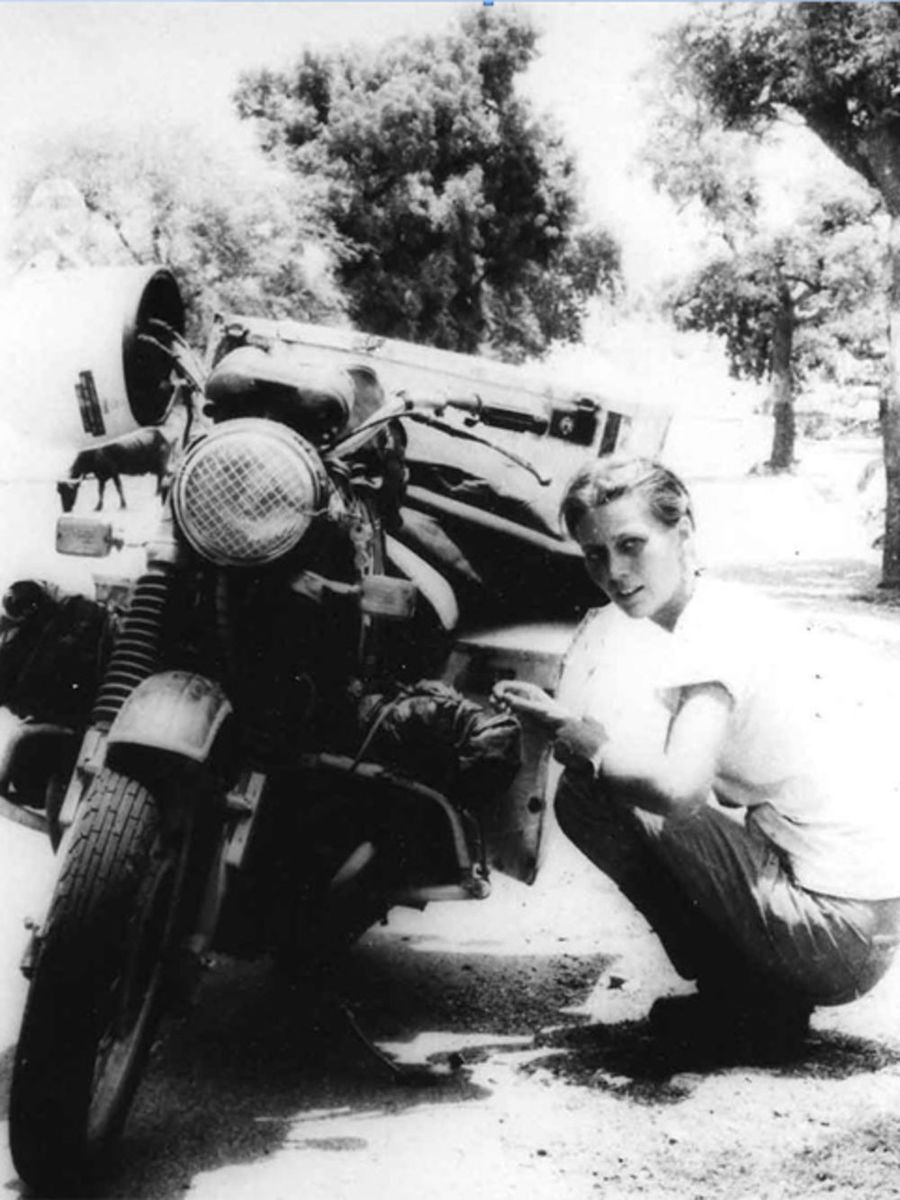 Elspeth Beard is a motorcyclist and award-winning architect who became the first British woman to ride a motorcycle around the world, travelling 35,000 miles over 2 years on a BMW R60/6. Starting her journey in New York – and sending her bike ahead of her with added soft panniers, a tank bag and an extra bag on her pillion seat – she continued to Canada, Mexico and Sydney.

She first learned to ride a motorcycle on the Salisbury Plains at the age of 16, heading off on her global journey in 1982 at the age of just 23. She released an autobiography about her experiences travelling the world on a motorcycle, titled Lone Rider, in 2017. She’s also travelled through the mountains of Norther Pakistan on her motorcycle, inspiring and educating young women on the choices they have through helping them learn to ride and maintain motorbikes.

Elspeth currently lives in Godalming, where she also runs an architectural firm, winning the Royal Institute of British Architects Award and appearing in an episode of Ride with Norman Reedus.

Born in Walthamstow, East London in 1936, Beryl Swain was the first woman to ever achieve a solo finish in the Isle of Man TT race. After meeting her future husband Eddie Swain, who owned a motorcycle repair shop, Beryl started to race 50cc bikes – her slight build gave her an advantage and Eddie became her race mechanic.

After achieving her international licence, she was able to enter the Isle of Man TT but was found to be under the minimum weight to compete. Using her skills and ingenuity, Beryl was able to complete the race finishing in 22nd place. This led to her featuring in the Motorcycle Show in that year and discussing deals with brands like Honda.

Unfortunately, Beryl’s licence was revoked the following year due to public outcry about the possibility of a woman being injured in a motorcycle race and she was prevented from competing in future races. She died in 2007, without being honoured in the TT’s centenary celebrations in 2007. 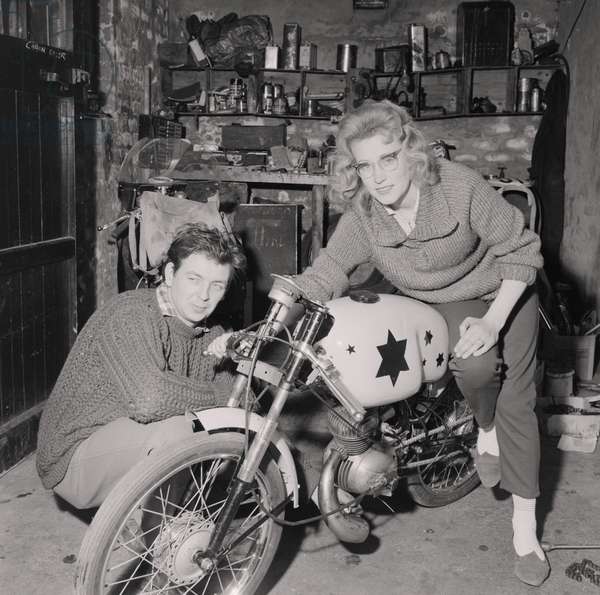 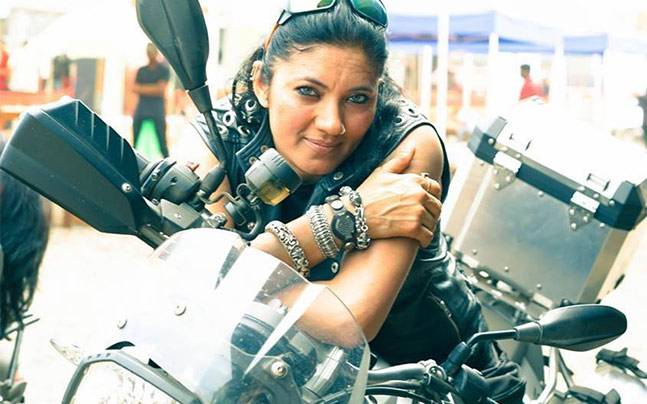 Veenu Paliwal is the most famous female rider in India and at one point was the only woman who rode a motorcycle in her home city of Jaipur. Veenu rode a Harley-Davidson, earning her the nicknames HOG Rani and Lady of the Harley and leading to her taking part in a sponsored trip across India to every Harley-Davidson dealership in the country.

Veenu broke stereotypes around women and biking in India with hopes to make a documentary on biking to inspire others, after being inspired by her father and friends to take up biking despite the disapproval of her husband. She later divorced him, after taking a break from her motorcycle. Unfortunately, Veenu died in a motorcycle accident in India in 2016 while undertaking a 10,000km trip.

Born in Michigan, Ashley Fiolek is the first deaf professional moto crosser – male or female – and the first woman to make the cover of TransWorld Motocross magazine as well as being nominated for an ESPN ESPY Award. She’s been deaf since birth and found her passion for motorbikes after her parents gave her a Yamaha PW50 at the age of three. She started to compete in races at the age of seven, becoming the WMX Pro National Champion in 2008.

Ashley then went on to compete in the AMA Motocross Championships from 2008 to 2021, becoming the first woman to be signed to the American Honda Racing factory team and winning a gold medal in Women’s Moto x Super x at X Games 15. This made her the X Games’ first deaf medallist and the youngest-even Women’s Motocross Association Champion. She’s also a stunt actor, featured in Vogue and presented a TEDx Talk before releasing her autobiography, Kicking Up Dirt. 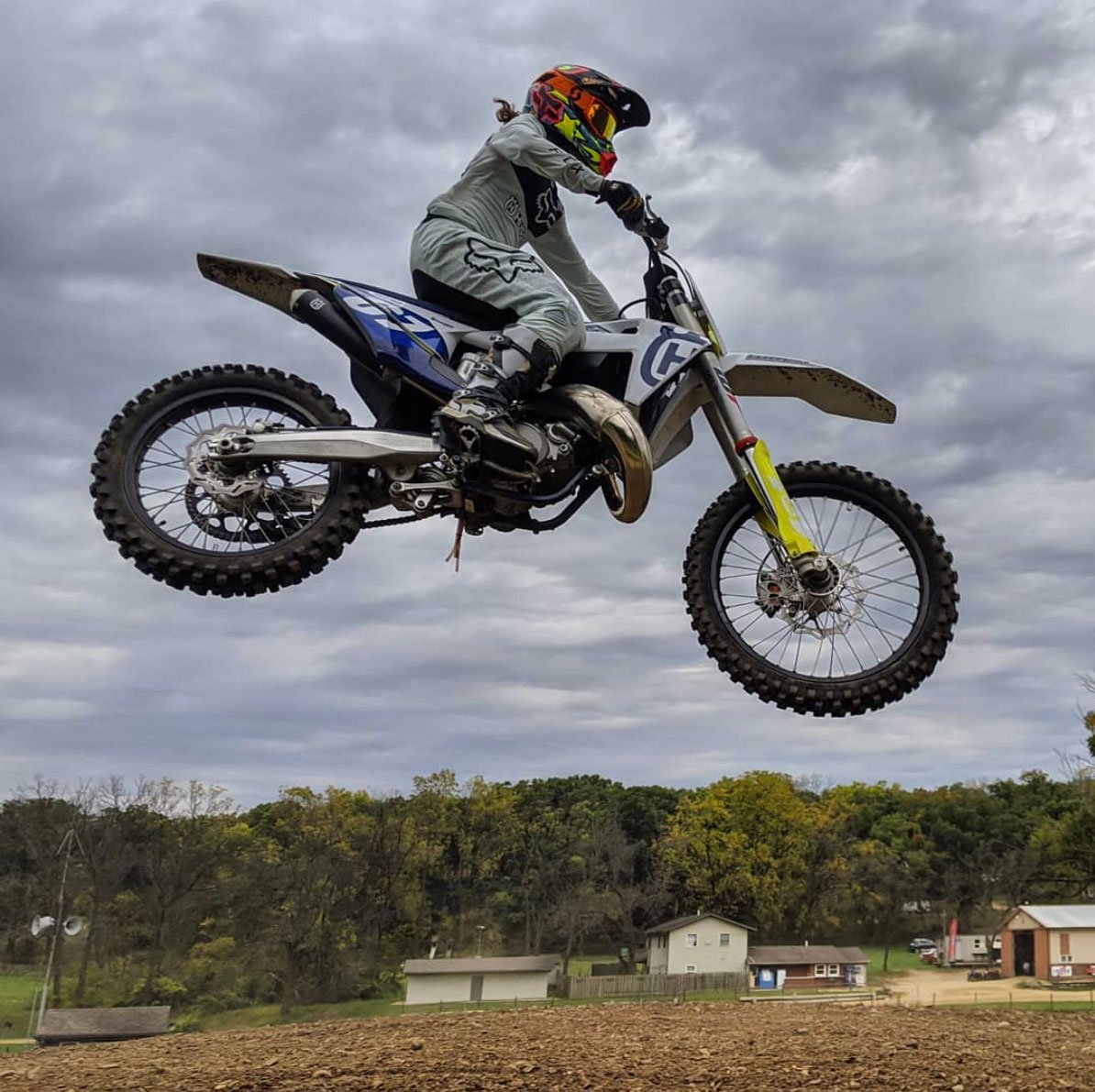 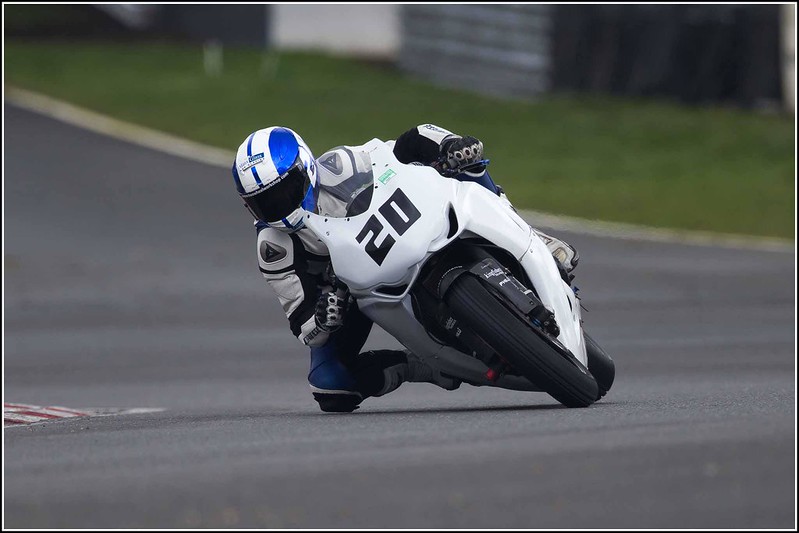 Jenny is now a motorbike racer, stunt woman and mechanic, receiving accolades around the world for her dedicating to sport.

She’s now a motorcycle journalist who regularly writes for industry publications and has appeared in documentaries, on TV and film either as a presenter, subject or stunt double – including as stunt double for Oscar-winning actor Reese Witherspoon. She’s an ambassador for the Institute of Advanced Motorists charity, patron of Riders for Health and was awarded an MBE in 2009. 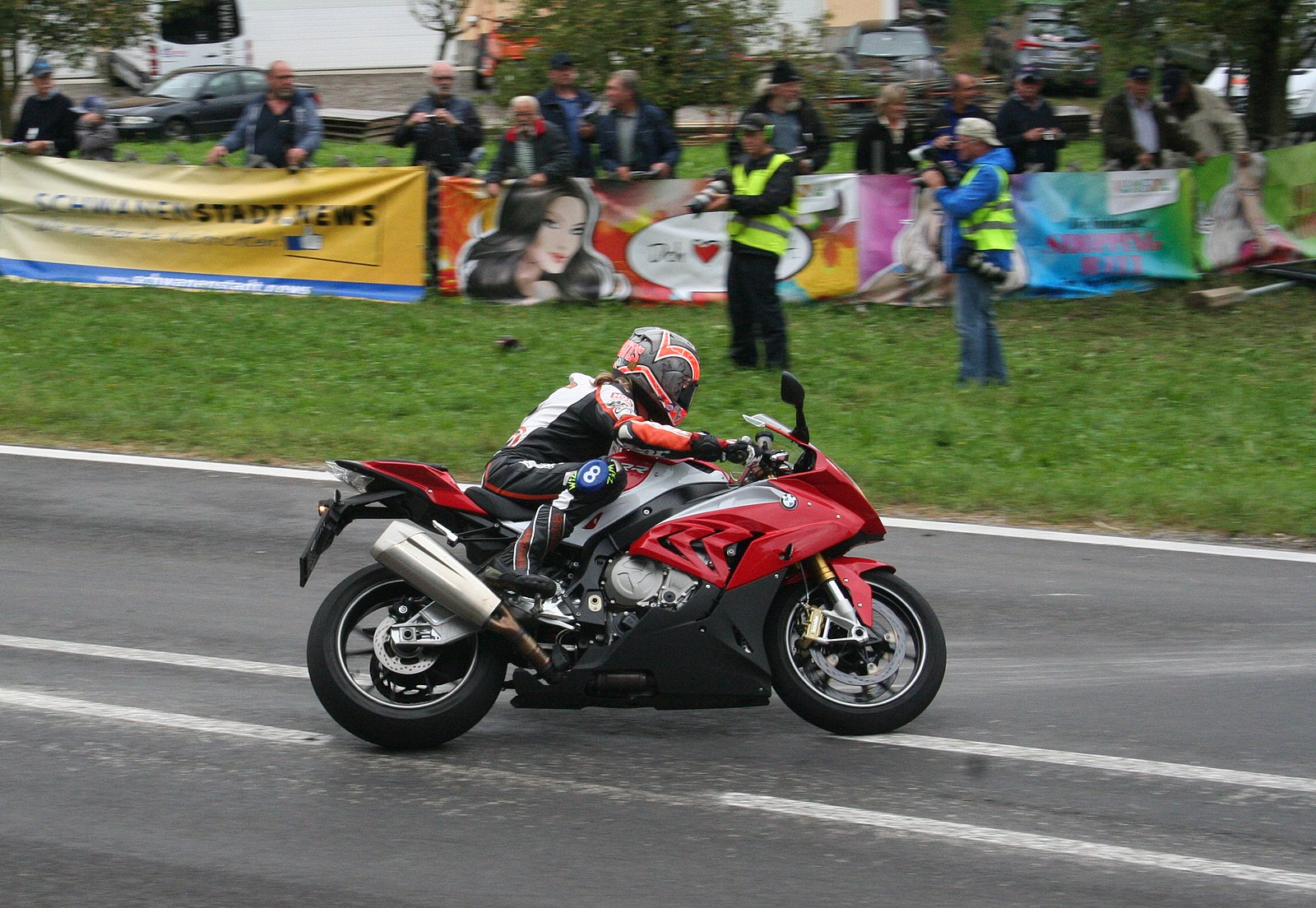 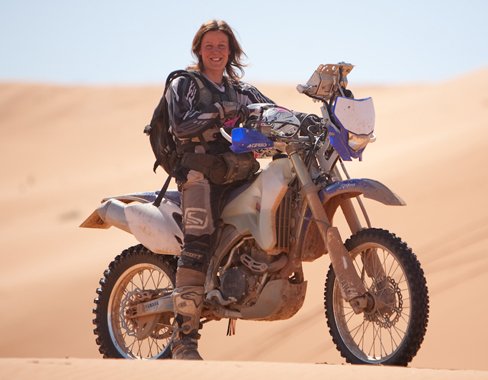 Since then, Tamsin has ridden the Welsh two-day enduro seven times, finishing as top women four times, and has beaten the 9,000 km Dakar Rally. She also holds a Mount Everest record for the highest woman to climb Everest on a motorcycle.

Tamsin now owns a training school, teaching others the skills they need for motorcycle adventure trips at all levels of experience.

Grace Webb is from Lincolnshire and is a TV presenter who started her career on Motors TV before moving on to the BBC with CBeebies’ Grace’s Amazing Machines where she educates children on how machines work. As a trained teacher, she also supported the BBC’s lockdown education programmes.

Grace comes from a family of motorsports enthusiasts – her grandfather was the founder of Donington Park’s Race Circuit – and has used her experience and passion to support educational campaigns with Transport for Wales and school workshops along with other motorsports programmes. 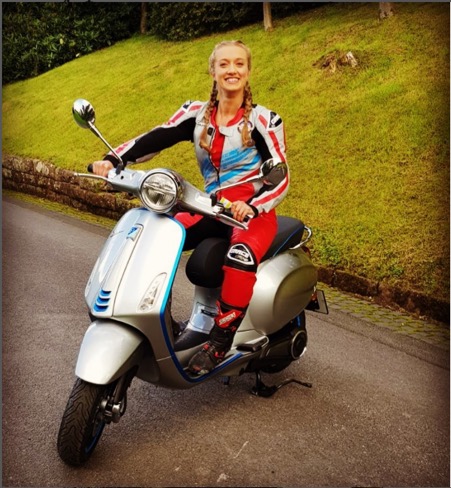 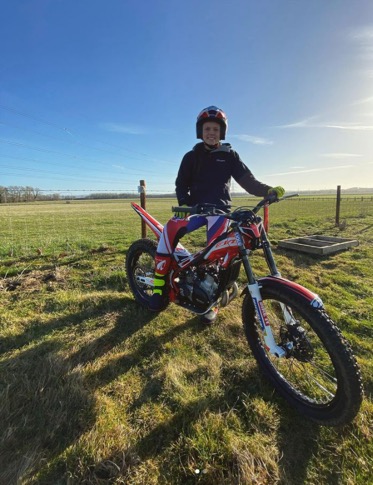 Born in Oxfordshire, Alicia Robinson has been riding bikes since she was just four years old. After taking the British girls’ B Class title in 2015 and the A Class crown in 2016, Alicia graduated to the British ladies’ series where she quickly established herself as a top-three contender.

Alicia has also made serious progress in the Trial2 Women class of the Hertz FIM Trial World Championship, claiming a win. She competes internationally for Great Britain at European and global levels, marked as one to watch.

Kiara Fontanesi is an Italian professional motocross racer who has competed in the Motocross World Championships since 2011 and is a six-time world champion. Born in Parma she started competing at the age of thirteen, heading over to the US to take part in competitions.

She’s taking a break from competing to have her second child but she says she will be back with the aim of winning the world championships in 2023. As Kiara herself says, “It will not be easy, but it will not be impossible, so always believe in it and never give up “. 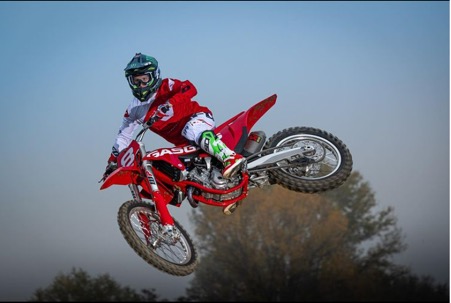 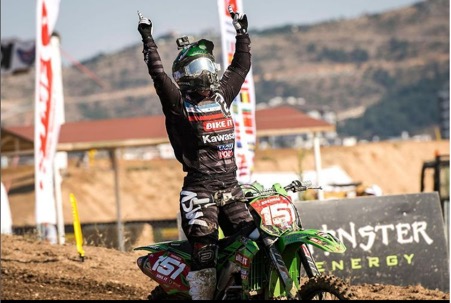 Born in New Zealand, Courtney Duncan is a professional motocross racer who has won three Women’s Motocross World Championships in a row in 2019, 2020 and 2021 and she’s not slowing down. As she heads into the 2022 season she and her Kawasaki are the ones to watch!