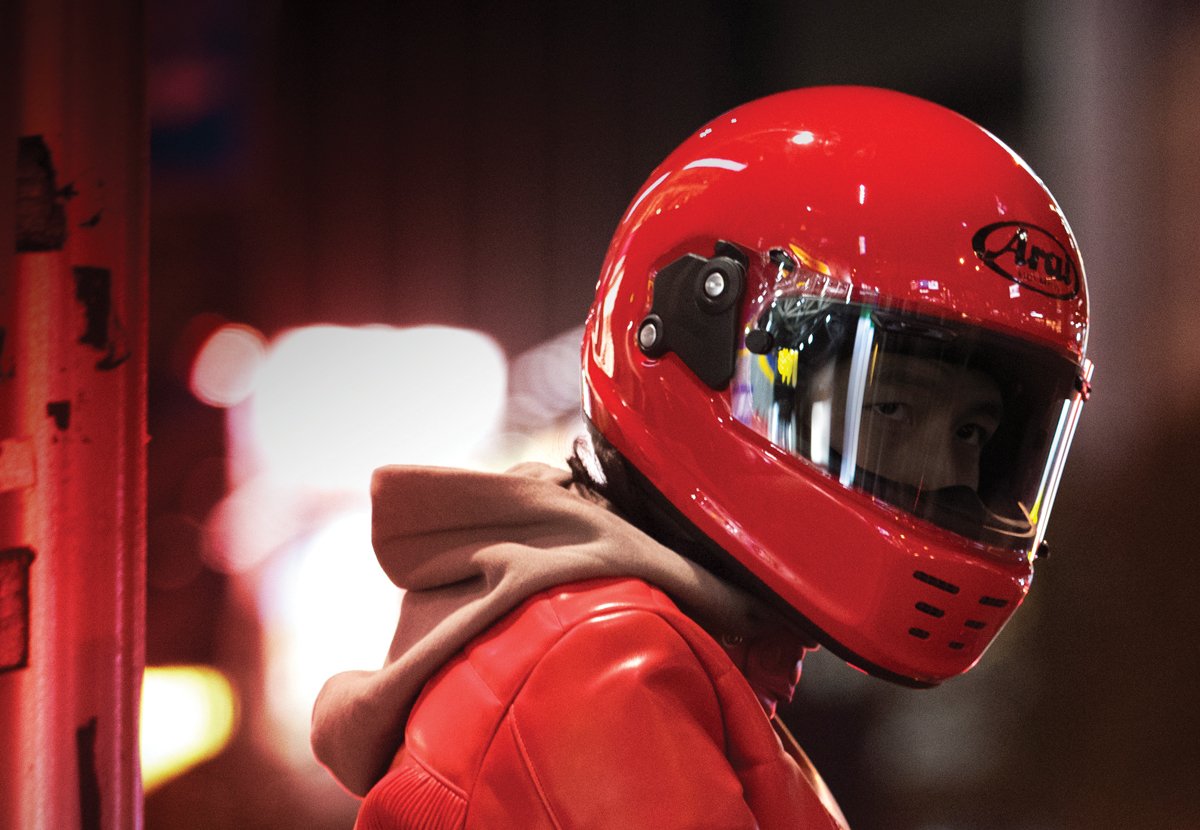 In 2019, Arai changed perceptions about retro helmets when they launched the Arai Rapide helmet. It was the first truly modern, retro-styled, full-face helmet.

For a number of years we petitioned the major helmet manufacturers to produce a high-quality, retro helmet. And that was because, whilst there were lots of retro helmets out there, most were little more than over-priced novelty pieces. Some of them looked great, some had fabulous graphics, but most simply didn’t work on the bike in the way one expected a modern helmet to.

They often didn’t fit well. Indeed, with chin bars that almost touched your chin, we actually thought some were pretty dangerous to ride in. Most weren’t comfortable. Nearly all of them were noisy. The idea of variable venting didn’t exist on these helmets. Not a single one was Pinlock prepared. And in heavy rain, most of these retro helmets were as watertight as a bucket with a hole in it base. 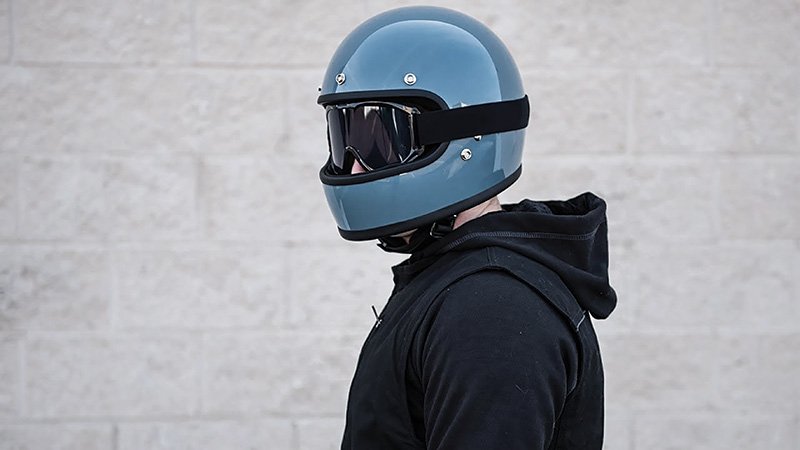 There are quite a few, smooth-domed, so-called, retro helmets out there. Some are cheap, some are certainly not. But none of them is sophisticated, or particularly technical. Not one, in our view, is designed with safety at the top of the priority list.. 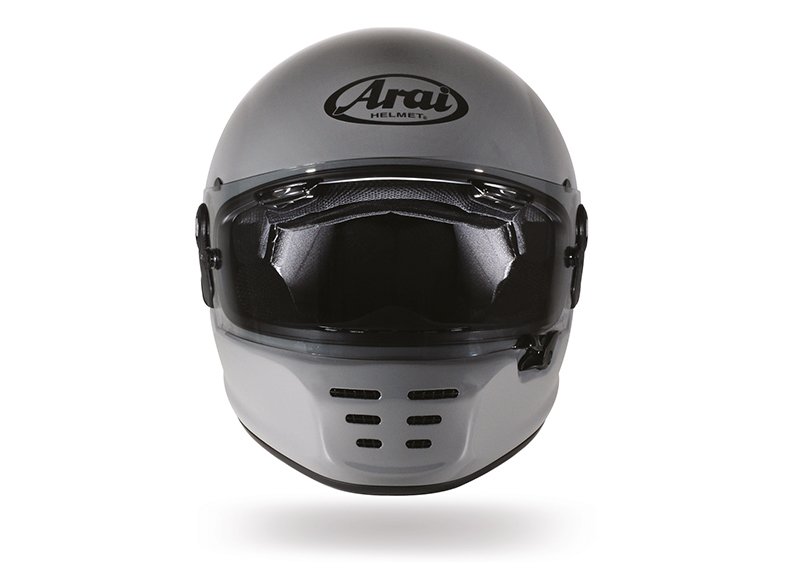 Now, it’s an Arai. So it has a super-tough shell. That’s a feature of all Arai helmets because, in the early days, Arais were tested to the Snell standard in the US. The Snell standard was designed for car racing, where you need a hard shell to absorb multiple impacts from, say, a roll cage. Now a hard shell is a good thing in some respects, but a hard shell doesn’t absorb energy in an impact to the same degree as a softer shell. And to compensate for this Arais have thicker eps liners. It tends to make Arais a bit larger than some helmets and a bit heavier. But make no mistake, this is a supremely safe helmet: it’s in a different league to any of the retro helmets that went before it. But you just have to accept that there will be smaller and lighter helmets out there. 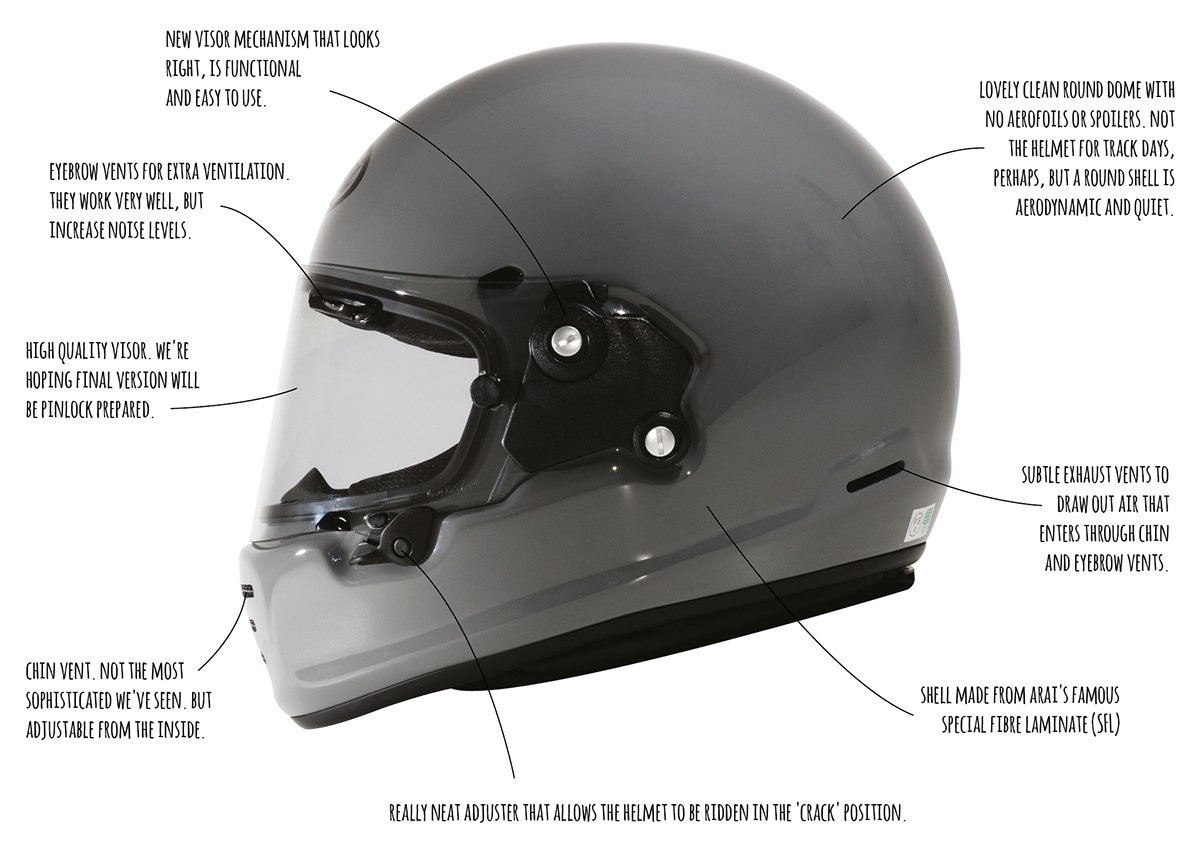 The smooth round shell is very much an Arai trademark, which is why a round shell very much colours our perception of what a retro helmet is. On the Arai Rapide the shell is totally uncluttered. It looks totally classic. But the helmet does have a bit of a Simpson Bandit-esque nose treatment. Still very retro, but perhaps a bit more eighties and nineties than seventies. It will look good on any retro bike, but what Arai also wanted was that it should work equally well on any modern custom bike, street fighter or cruiser. And it will do.

Ventilation on the Arai Rapide helmet is good, but retro. There are six vents in the chin, and the vent is closeable from inside the helmet. You also get adjustable eyebrow vents. These really work, but when they’re open they do increase noise levels a bit. Which is not to suggest that the Arai is a noisy helmet. It’s not. In fact, we reckon it’s quieter than any other Arais we’ve ridden in. Air exhausts through outlets at the back and side of the helmet.

Now the visor is of the grade one optical quality that you would expect. Obviously, as it’s an Arai, there’s no drop-down sun visor, but down the road we hope to see some properly retro-tinted visor options. The visor attaches with a system called VAS. It pivots the visor, so that it pulls tightly into the visor aperture to create a better seal. It gives a cleaner, smoother look to the helmet, but it also makes for an excellent seal to keep out both the wind and the rain. Personally, we really like the old-fashioned, screw-in side panels that secure the visor. They look the part, but we also suspect that they contribute to the helmet’s relative lack of noise. You also get, and this is exclusive to the UK version, a Pinlock 120 in the box.

The interior is what you would expect of an Arai. All the facings are comfortable. They can be removed for cleaning and, as with Shoei, we can change headliners and cheekpads to customise the fit. In proper, retro style fastening is by means of a double d-ring. We often go on about the fact that there’s no such thing as an Arai head, because every Arai model has a slightly different head shape, but the whilst an Arai is still oval in shape, it is nonetheless a bit rounder than a Shoei. So if you find that a Shoei is too narrow for you, you might find the Rapide just a bit more accommodating.

So where do we get to with the Arai? What do we think about it? How do we rate it?

The Arai Rapide is a modern, supremely-safe, well-vented, quiet helmet that you can ride in all year round, all day long. Inevitably, people are going to compare it with the Shoei Glamster, and indeed the two helmets are direct competitors. The Shoei is lighter and easier to wear. It has more of a classic shap.

Click above to watch our review from The Chap in the Cap.

The Arai Rapide feels more like a traditional Arai which, of course, is what it is. To make this helmet, Arai has simply dug into its archives. It has not attempted to do anything new or different. If you like your Arais, the Rapide is going to feel familiar. It is solid, robust and beautifully put together. It doesn’t pander to the Hipster brigade. It has not been designed for the decaf. latte crowd. It’s a proper old-fashioned helmet. It’s not a pastiche; it’s the real deal. The Shoei is also a great helmet; it’s a very similar helmet, but it’s a typical Shoei in the way that the Rapide is a typical Arai. But if you want just one helmet that you can commute and tour in, or throw on to pop out to pick up the newspapers, we could make a case for the Arai.

If you’re more of a weekend rider, want something light, easy and cool to ride in then you may be more drawn to the Shoei. The Shoei is cheaper and, although beauty is in the eye of the beholder, the Glamster is probably more in line with what most people expect a retro helmet to look like.

But we reckon that the choice will largely be down to aesthetics. Both are great helmets. From a technical and functional standpoint, both blow every other retro helmet on the market into the weeds. And, what’s more, given what these helmets are, and who makes them, we reckon they’re both really well priced.

You can see all the different colours of the Arai Rapide helmet here. 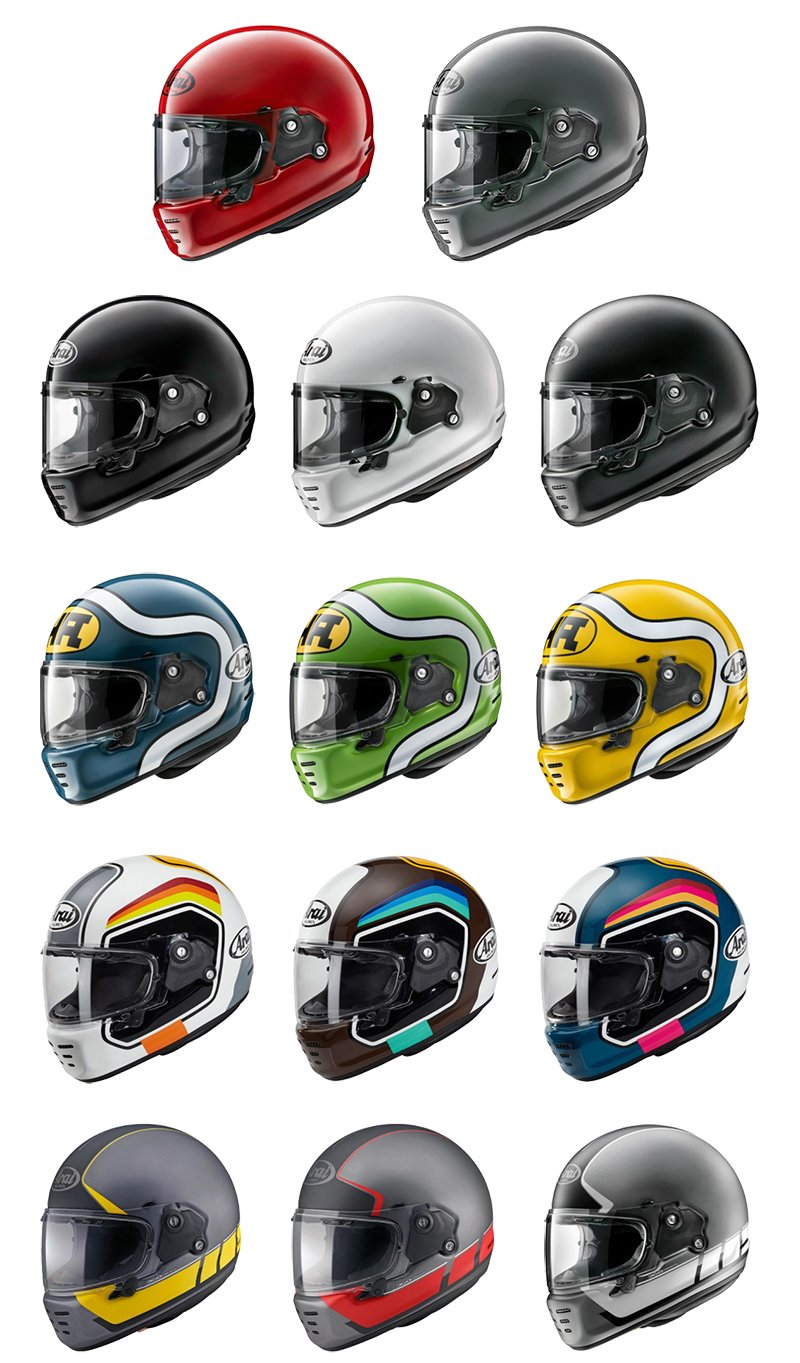