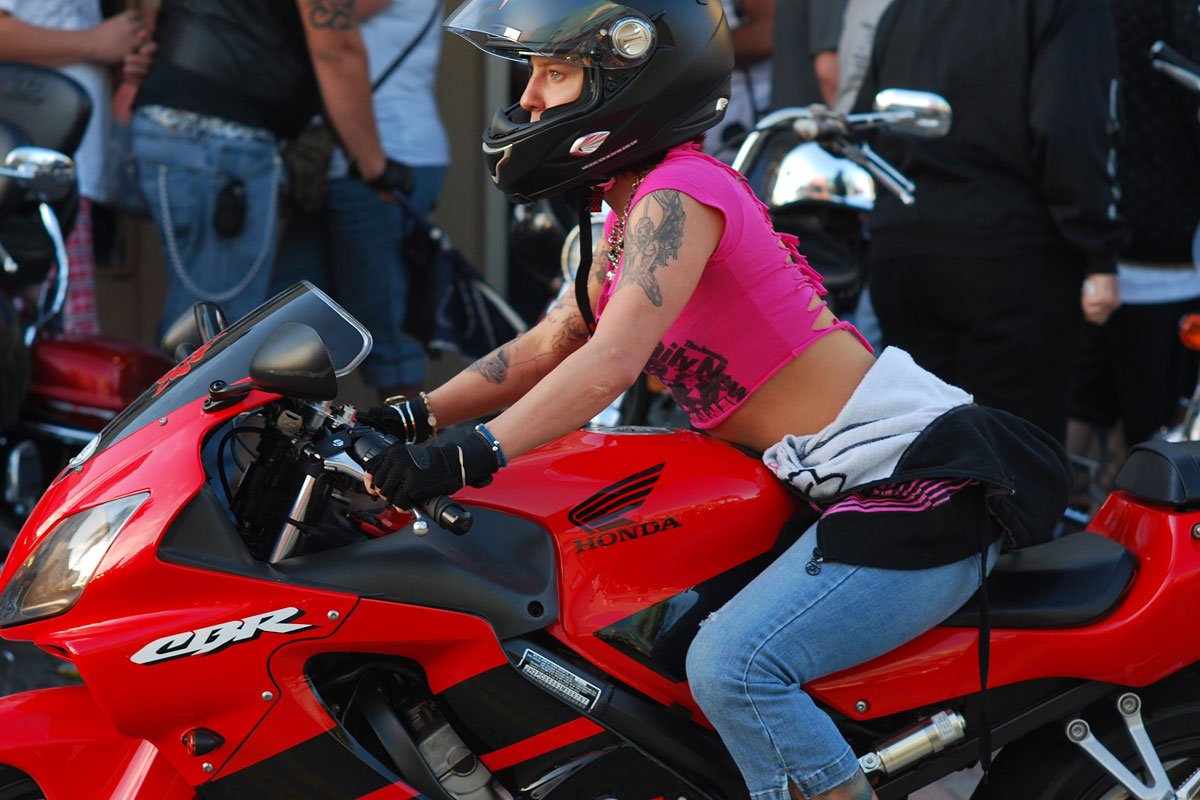 In a recent issue of a motorcycle trade magazine, I read a small piece about the rise in serious injuries and fatalities to motorcyclists in London.

Between 2013 and 2014, the number of incidents apparently increased by almost 25%. And this against an overall improving picture that saw the total number of cases fall by 7%.

Surprisingly, given the huge increase in the number of people cycling in to work, there was a drop of 12% in deaths and serious injuries to cyclists. In the last year, I’ve done a lot of commuting into the capital, and I’ve witnessed the aftermath of quite a number of accidents involving bikers.

I’ve come across some very skilled and safe riders, but I’ve also witnessed some pretty stupid and dangerous riding that, frankly, makes me embarrassed to be a motorcyclist. Most of the incidents I have come across have involved two specific categories of motorcycle; scooters, if these can be classified as motorcycles, and sportsbikes.

The problem with scooters and scooterists, it seems to me, is fairly easy to understand. The people riding them have often made no investment in developing the necessary skills to ride safely on the road. It’s often their first mode of two wheeled transport, and it’s probably the case that whatever roadcraft they have developed has been acquired by driving a car. They don’t seem to be aware of their vulnerability and, therefore, their limits. They weave in and out of traffic with little awareness of other road users. They use speed inappropriately, they ride on the pavement if it means they can jump a queue, and seem to think that traffic islands don’t apply to them. Often dressed inappropriately, given how quick their machines are, it hasn’t surprised me that their mounts often end their days as dozens of pieces of plastic strewn across the carriageway.

The other category of bike that I have frequently seen involved in accidents is the sportsbike, and as I have ridden behind, in front of, or alongside, sportsbikes in the busy traffic, a number of factors have caused me to wonder whether this style of motorcycle is inherently unsuited to, and therefore unnecessarily dangerous for, the task of commuting.

Of course, my observations are not founded on objective analysis. They are based on a sample of one; they reflect, I am sure, my predispositions and prejudices, and come with absolutely no statistical significance. 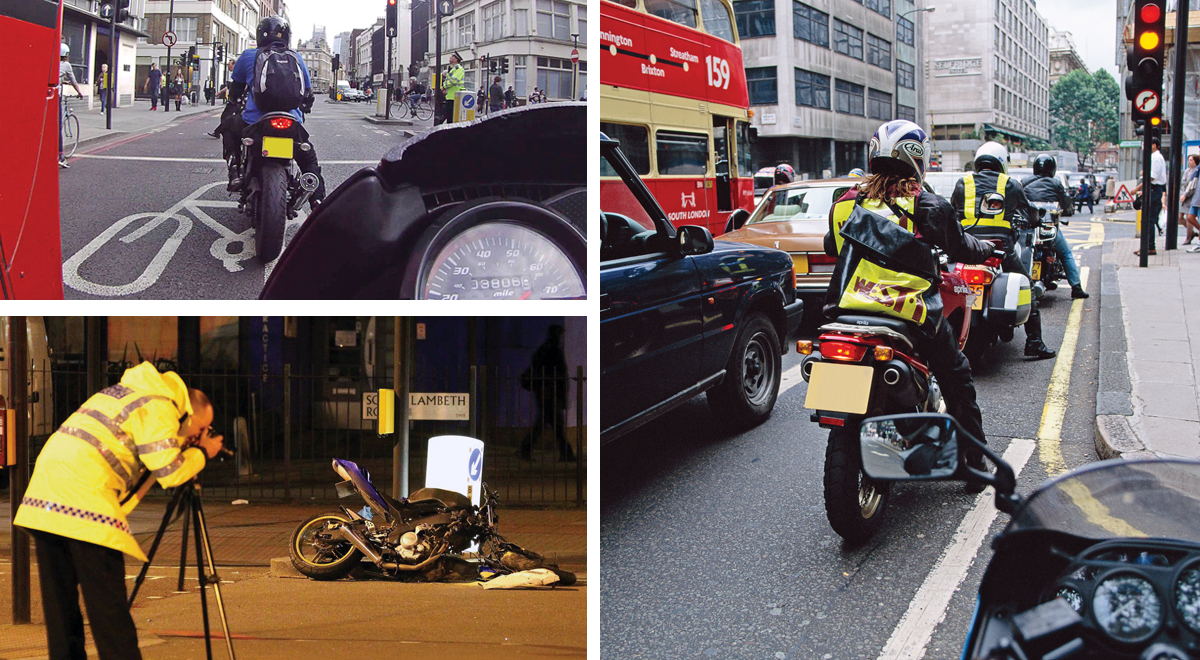 London has more and more motorbike commuters every year, so be ready for anything.

The first point to make, of course, is that sportsbike riders as a personality type are probably more likely to be involved in an accident than the riders of most other types of motorcycle. By definition almost, they are more interested in speed, and are more prone to risk-taking than the average rider of, say, an adventure bike or a touring machine.

Nevertheless, I think the sportsbike has two or three inherent drawbacks that put it at a disadvantage to most other types of motorcycle that face the daily grind of commuting into major cities. The first is the poor rearward vision that most sportsbikes provide to their riders.

A sportsbike, of course, is based on a race bike; a fact that is beyond denial I would suggest. Proper race bikes don’t have mirrors because, as a racer, you don’t really care what’s behind you until you can hear the noise of its exhaust.

Manufacturers have done the best they can to give sportsbike owners a degree of rearward visibility, but it’s tokenistic at best. The maker of a 163 mph motorbike doesn’t really want it to be reported in the press that its machine can only reach 159 mph, so mirrors are fitted as a necessary evil to be kept as unobtrusive and as tucked in to the rider as possible.

If you have ridden a sportsbike, and most of us have done, you will know that when you want to look behind you, before executing an overtake for example, you will bend your right arm into your body to get a better view of the road behind.

All well and good, and reasonably safe if you know what you’re doing and are on your game, but in heavy traffic when you’re watching for spaces and gaps, avoiding crazy white van drivers, cyclists, scooters and suicidal pedestrians, you often just don’t have the time to tuck your elbows in to get a better view. Things happen too fast.

What this means, and I’ve observed this from riding behind hundreds of sportsbikes, is that most of the time, their riders have access to only a tiny portion of their mirrors, as a result of which they often have little idea what’s right behind them. We’ve all seen those signs on lorries that say that if you can’t see his mirrors, he can’t see you. Well, on most of the sportsbikes I’ve followed, I could barely see any part of either mirror.

From our photographs opposite, you can see how much use the rider of an adventure bike has of his mirrors, as opposed to the rider of a sportsbike. This was brought home to me to an even greater degree when we shot these two Triumphs at our local dealership: Destination Triumph in Bramley.

I’m the guy on the bikes. We placed them in the same position on a quiet side road and Graham, the photographer, took the shots from the same distance from both bikes, and of course at the same height. About four and a half feet high, and ten meters behind the bike.

On both bikes, I adopted what I felt to be the natural and most relaxed riding position. I tried not to exaggerate the position in either case. What was very concerning was that there was a silver Toyota Corolla parked side-on about 30 meters behind where we shot the bikes; ie: it was the entire side of the car that was visible, and not just the front.

In heavy traffic, it’s life savingly important to be able to see what’s going on behind you, especially if you’re changing lanes in order to make progress. Cars get impatient and pull out in order to gain a car’s length advantage. They will sometimes do this at great speed. Frankly, on a sportsbike, you will all too often stand little chance of knowing what’s going on, and what’s closing in on you.

The differences in visibility, and therefore safety, between a sports and an adventure bike can be quite staggering.

Personally, I think this near absence of rearward visibility is a potential killer, and whilst I own several sportsbikes, this issue alone is enough to prevent me from riding one into town in heavy traffic.

My second observation concerns the angle of forward visibility. A fact that cannot be denied, although it’s not my primary focus, is that sportsbike riders sit lower and closer to the road than do the riders of a sit-up style bike. As a result, seeing ahead and over the roofs of cars and other obstructions is rendered more difficult.

Nothing particularly extraordinary in this observation. The view from a Range Rover is obviously better than that afforded from a Lotus Elise. But an accident in a car in heavy traffic is unlikely to be overly serious. On a bike, any accident can be.

My main concern about the forward visibility from a sportsbike, however, centres on the rider’s natural line of sight. As I have already pointed out, a sportsbike is basically a road-going race bike. The riding position on a race bike is not designed to give the rider great levels of peripheral vision.

The rider leans forward and low, in order to put weight over the front wheel, and to improve the aerodynamics at speed. Of course, there are times when a racer will look up to make sure he gets the right line for a bend, or series of bends, but this tends to be a fleeting glance before tucking back into the bike again.

As you can see in the photographs on this page , we have shown the natural sight line for a rider on both a sportsbike and an adventure bike. In a relaxed position on the sportsbike, the rider is looking at the ground, some five to ten metres ahead of the bike.

As with a race bike on a track, a rider on a sportsbike can look up for a better view, but in doing so, he will have to adopt a slightly unnatural and somewhat uncomfortable position, putting strain on the neck.

It’s doable, but after a time it’s going to become tiring, at which point you are going to do it less. However you view it, the seating and riding position on a sportsbike does not lend itself to the kind of all round visibility and awareness that you need to survive in the urban crawl.

By contrast, on the Triumph Tiger, on which you sit higher in any case, you have a sight line that is not far off parallel to the ground, giving you an excellent opportunity to see what’s going on, not only ahead of you, but with a slight turn of the head, beside you and behind you too.

Don’t misunderstand us. We’re not against sportsbikes. In the right circumstances, there’s nothing that comes close to the excitement and sheer visceral thrill that a sportsbike can generate. But it’s horses for courses. If you want to lap a circuit at high speed, or if you delight in getting your knee down on roundabouts, then it’s got to be a sportsbike.

If you’re putting in high miles on the road, however, and especially if you’re doing a lot of commuting on congested routes, then we take the view that the sportsbike is unquestionably the wrong tool for the job. Riding a motorbike is a dangerous activity, and in so doing you always want to stack the odds in your favour. Riding a sportsbike in London doesn’t do this. Riding a naked bike, an adventure bike, or in fact a sit-up bike of any description kind of does. It’s worth thinking about!