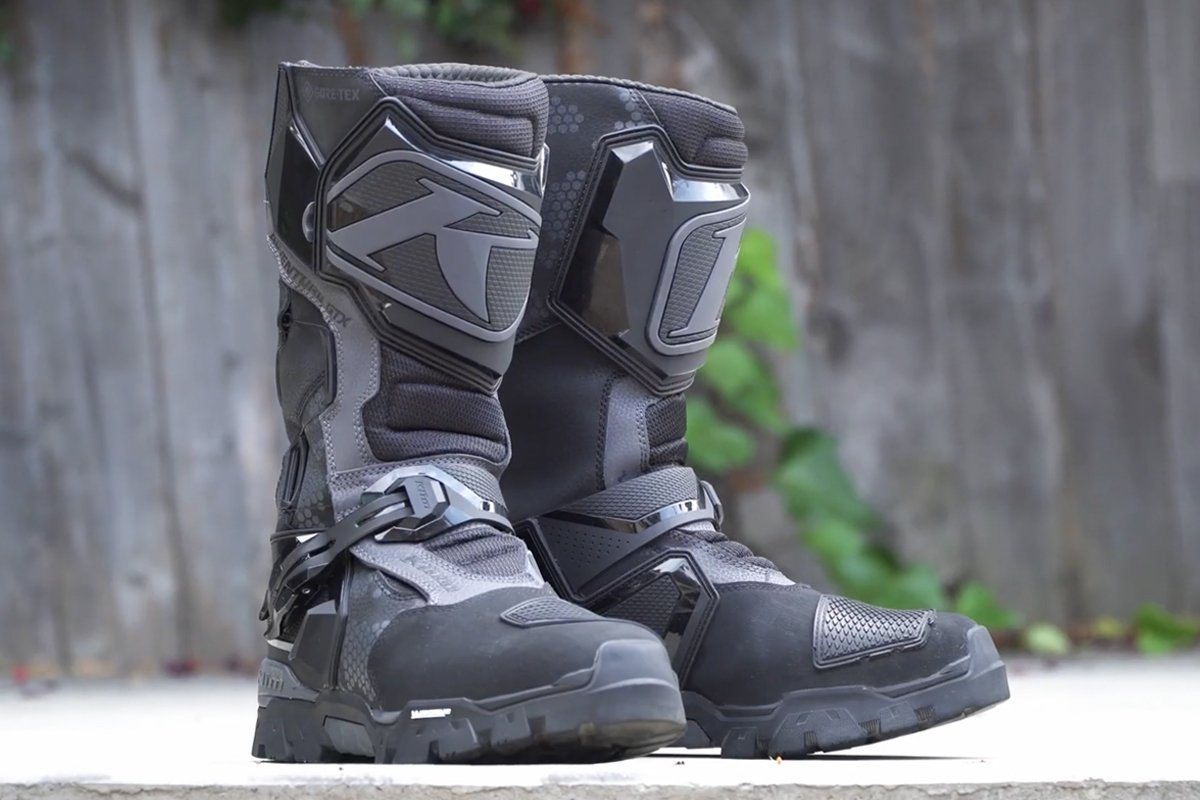 One of the things we really like about Klim is the fact that they march to the beat of a different drum. Now this might have something to do with the fact that, in Klim, we have a bunch of mad-keen off-road and adventure bikers; and they’re all stuck in the middle of this huge field in the middle of Idaho. But before you jump to conclusions, by the way, Idaho is not in the middle of nowhere. We checked on a map. They are just to the left of the middle of nowhere! As a result, perhaps, of their slightly remote geographical situation they don’t always get to look at what all the big European players are doing. And this is good, because at times the boys and girls at Klim just have to start from scratch, and come up with their own designs and their own ideas.

By contrast, over here in Europe, it sometimes seems that everybody just copies one another. Let us take adventure boots for example. Lots of people do them, but put them next to one another and you’d be hard pressed from 10 metres to spot the difference between the TCX, the Falco, the Held, the Forma and, for example, the Gaerne. In fact, I reckon there must be a dozen adventure boots on the market that look almost identical. They all come in the same two colourways, and the differences between them are little more than cosmetic.

The Adventure GTX is an adventure riding boot that doesn’t look exactly the same as every other one.

And so the new Adventure GTX from Klim is refreshing; it looks like no other adventure boot out there. We spoke with Jayson, Klim’s Product Line Manager, about the process involved in putting this boot together. The original brief from the marketing department was for an adventure boot that would almost certainly spend most of its time on the road. It would have to cope with touring in a variety of climactic conditions. The wearer would normally be riding an adventure or dual-sport bike, and the boot would have to be able to cope with proper trails, as well as muddy and rocky paths. This was never intended to be a full-on, off-road boot in the vein of one of those big plastic jobbies from the likes of Alpinestars, but it needed to be able to cope with the gnarly stuff if that became necessary. Crucially, though, the boot needed to be good to walk in; as comfortable as a good-quality road boot, and certainly in a different league to an off-road boot. Klim wanted to cater for the guy who would ride on the road, and who would then turn off it to ride the trails and fire tracks; and who might then want to stretch his legs by climbing a hill to catch a beautiful sunset after a long day in the saddle. But it would need to be equally suitable for the guy touring Europe, and who might want to explore on foot some medieval town that he had happened upon on his travels. The brief, therefore, was pretty demanding.

The boot needed to work on the road and off, but it also had to be up to whatever else you wanted to do.

Now it’s not quite clear what the main chassis of the boot is made from, but I think it would be safe to postulate that no cows suffered in the production of this boot. Klim talk about rugged materials, but we are clearly talking about microfibres and synthetic materials like Lorica, with secondary layers where deemed necessary. On the shin and across the ankles you get hard plastic reinforcements. There’s a suede-like covering of the toe box, where you will also find a gearchange pad. Klim talk about giving the boot a generous toe box, to give the toes a little more wiggle room. And this is to make the boot more comfortable for walking. The shaft of the boot, both fore and aft, is faced with small areas of of soft padding that are going to make the fit more forgiving, when both sitting or standing on the bike.

The Adventure GTX has the best of the best. A Gore-Tex liner. BOA lacing. And a tough Michelin outsole.

The boot’s waterproofing is supplied by Gore-Tex, so comes with their Guaranteed To Keep You Dry promise. The inside of the shaft is padded throughout for comfort. The outsole is a huge Michelin number that looks as though it would be more at home as an OEM part for a Hummer. Halfway down the sole there’s what is called an instep guard to prevent sharp-toothed foot pegs from damaging the sole. Embedded in the sole is a lasting board, what we know as a shank, and this is there to give the sole extra transverse rigidity. It’s hard to comment on this, but certainly the boot feels incredibly strong across the footbed.

This boot has been thought through. See the large plastic shin protector. And the useful instep guard.

There’s a huge plastic protector for the shin, and there are re-inforced, protective boxes for the toe and heel areas. The ankles and the lower part of the shaft of the boot are padded with XRD impact protection foam. This may be there to help absorb energy in an impact, but these pads certainly help to make the boots more comfortable to wear. There are also concertina pads in the heel and in the front of the foot that enable the boot to articulate better for easier walking. A single, ski-boot type buckles fastens the boot to tighten it around the heel.

A single, ski buckle adjuster serves to draw your foot securely into the heel of the boot.

In fact, there are three systems that contribute to easy ingress and egress. At the top of the boot, there’s a large, wide-opening, Velcro flap. There’s the ski-boot buckle. And then there’s the fantastic BOA lacing system that is operated by a twist-and-pull dial at the back of the boot that allows you to finely adjust the fit around the shin and calf. What’s so nice about this is how easy it is to use with a gloved hand.

We love the BOA calf and shin adjuster. And it’s so easy to use, even with a gloved hand.

The anti-microbial insole contains a gel, again with a view to making the Adventure GTX as comfortable as it can be. The boot comes with a spare Ortholite insole, but you also get an insert that apparently allows you to size the boot down by half a size. The implication of this? Go up a size if you’re unsure.

The Adventure GTX boot has very much been designed to wear inside the leg of a motorcycle pant.

So that’s the spec.. We’ve never come across a more technically sophisticated boot. Klim advise that this is a boot that is intended to be worn inside a trouser leg. If you wear a pant inside the shaft of the boot, the BOA lacing system will not really be able to tighten around the calf in the way it is meant to.

Here Chris once again takes issue with the Americans’ ability to correctly pronounce their brand name.

We think the Adventure GTX is an extraordinary boot. It is different. It is highly protective and it will be comfortable to wear. People use the term ‘all-day-comfort’ too easily. But we know that you can wear any boot all day if you have to. And that will be the case with the Adventure GTX, but with the Klim we reckon that when you do take the boot off at the end of the day it won’t be with an overwhelming sense of relief. We still don’t think you’d want to wear them to bed, though! 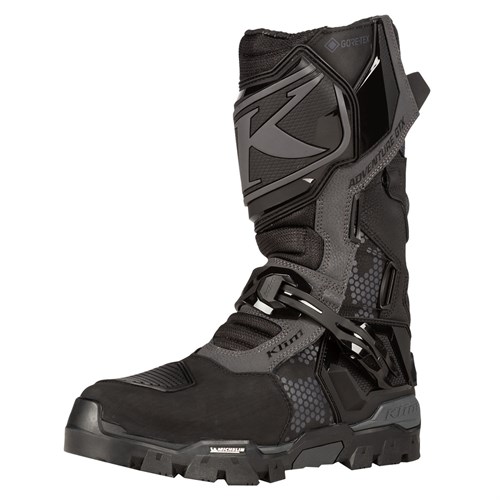