Now even though we are far and away the largest seller of Klim in the UK, their range is so huge that we have to admit to not knowing it as well as we would like to, which is why we had not originally selected the Carlsbad suit for this season. Instead, we elected to offer Klim’s signature Badlands Pro A3 adventure suit and their upgraded Kodiak road suit.

Now we like Klim, and we really do love some of their gear, but their infrastructure in Europe, and particularly here in the UK, is somewhat lacking. Brexit and the pandemic have combined to put them in a bit of a pickle. They haven’t been able to supply the orders placed by their retailers, and they are holding very little of anything in their European warehouses. And so we have received next to no Badlands Pros this year and probably even fewer Kodiaks.

Let’s put it like this. If you had a mate who made beer for a living, and you decided that you wanted to have a bit of a shindig at his gaff, you probably wouldn’t ask Klim to make the final arrangements!

If you wanted to organise a party at a place like this, you probably wouldn’t ask Klim to organise it!

And it is this lack of stock availability that has forced us to widen our net, in the process of which we came across a suit called the Carlsbad; and we have to say we like it. Indeed, so much so that we have bought all the spare inventory in Europe. And what this means is that it’s the one Klim waterproof suit we have good stocks of.

Now availability alone is clearly no reason to buy an outfit, but if you’re looking for an adventure suit, it’s probably a better option for many than the Badlands, so let’s tell you a bit more about it.

What the Klim Carlsbad is

We have, at times, disagreed with Klim about what an adventure suit is. Klim considers the Badlands to be the ultimate adventure outfit, but in our book a proper adventure suit doesn’t have a fixed waterproof membrane because, if you’re riding somewhere really hot, or if you ride hard off-road, you don’t want to be wearing anything with a membrane, because you’ll overheat.

But we’ve come to the view that our take on adventure outfits is merely different to Klim’s. Over there, an adventure rider may do an occasional bit of riding off the beaten track, but he will probably do by far the the majority of his riding on the black stuff. And so an adventure suit, in Klim’s world, has to do a bit of everything. Which is why Klim’s adventure suits normally have laminated membranes.

The Badlands Pro is the company’s premier adventure suit, but historically we have never been fans of the Badlands. The new A3 Pro version is big, baggy and heavy. It’s an impressive bit of kit. It is the world’s only AAA rated Gore-Tex suit, and it has oodles of bells and whistles. More vents than an air-conditioning unit. And more pockets than you’ll ever be able to use.

The Badlands is Klim’s top adventure suit. It has a lot going for it, but it’s not the easiest suit to live with.

In principle, the Carlsbad is a similar kind of suit. It’s a little more fitted than the Badlands, although it’s still has a loosish, off-road fit that gives you plenty of room if you’re up on the pegs and moving around a lot on the bike. But whereas the Badlands achieves its waterproofing by means of a three-layer, laminated Gore-Tex membrane, the Carlsbad comes with a much easier-to-live-with two-layer Gore-Tex laminated membrane. There’s very little trade off here. The Carlsbad will be every bit as waterproof as the Badlands. The warranty is not affected. But a 2-layer laminated suit will always be nicer to wear than a 3-layer.

The Carlsbad is a two-layer laminated suit. It is as waterproof as the Badlands, but more comfortable.

So why would you choose the Badlands over the Carlsbad? In truth, we would ask the same question. Okay, as we’ve pointed out, the new Badlands has a higher rating under EN 17092, and it comes with some bells and whistles you don’t get on the Carlsbad, but the Carlsbad is much less expensive and much more comfortable, so frankly just about any day of the week we probably would take the Carlsbad over the Badlands.

Let’s talk through the Carlsbad in a little more depth, therefore.

The Klim Carlsbad jacket in detail

There’s a mix of fabrics used on the jacket. The chassis of the jacket is made from a 400 FPL fabric. The conversion chart would suggest that this is equivalent to something like a 630 denier Cordura. On top of this, there’s an overlay up the arms to the shoulders, and on the pockets, of a highly abrasion-resistant, Ripstop-style fabric. Now this material is made from twisted yarns that dramatically increases its strength, even though technically the material is still a 630 denier fabric. Yes, I know, that’s all a bit technical. But the bottom line is that you get serious levels of abrasion resistance with the Carlsbad, but in a lighter weight package than the Badlands. And indeed the Carlsbad suit is certified AA under EN 17092, which is the same as the best from, say, Rukka.

You can wear the Carlsbad off road, but you still get all the on-road protection you might want.

The armour throughout is Level 2, air-flow D30; and that includes in the back. The elbow and shoulder armour is adjustable. The jacket is largely mesh lined, as are the armour pockets to aid air flow. The back protector is made from a 3D mesh that raises the back protector away from the skin, again with better air flow in mind. The jacket can take Klim’s kidney belt, although it does not come as standard.

Now venting. Venting is one of the things that Klim is famous for. Of course, if you really want venting, you don’t buy a jacket with a waterproof membrane, but if you do want a waterproof jacket, nobody combines waterproofing with venting better than the American company. On the front of the jacket, there are two vents towards the outer edge of the chest. You also get vents that run from the ends of the sleeves up to the elbows. On the left hand side of the chest there’s another large vent that doubles as a document pocket. There are also two vents on the back of the jacket. All the vents are protected with waterproof zips, which of course is a particularly important factor on a laminated garment.

Pockets are another big thing for Klim. You get two large flap pockets below and two smaller upper pockets. There’s also side entry into the lower pockets, although this is more about keeping your hands warm. At the end of the left sleeve, you get a small credit card pocket. Inside the jacket there are no less than six pockets and pouches, one of which is a secret one for a passport hidden behind the back protector. (Darn, I’m not meant to give that away!).

But we’re not done yet. There’s lots more pleasing detail on the Carlsbad.

The collar has a soft lining for comfort, and to absorb the rain as it tries to run into the jacket from the helmet. The collar can be tightened with a drawstring. You get two tabs that allow the collar to be held open. It’s simple but very effective. We can’t work out why everybody doesn’t do the same! All over the jacket you get black Scotchlite for night-time visibility. The main zip, by YKK of course, is double-headed and is covered by a storm flap with a rain gutter.

We love the tabs that allow you to ride with the collar held open. So simple, yet so effective.

The rear of the jacket is lowered, which is what you want on a motorcycle jacket, especially if you’re not zipped in, but the Carlsbad still has a short zip so that the two halves can be connected. There’s also an adjustable, elastic cord that can be used to tighten the hem as required.

As you would expect, the Carlsbad pants mirror the jacket in all the key aspects of design and construction. Clearly, though, there are differences of detail.

Inside the knees, the pants are lined with goat hide, and this is to allow the rider to better grip on to the bike when standing up on the pegs. Klim’s spec. also talks of an extra layer of Cordura inside the knees for durability, but we can tell you that’s incorrect; it’s not there. But you do get an extra band of Cordura on the hem of the pant to prevent potential fraying.

You get leather inside the knees for grip and large zip gussets to accommodate even the largest boots.

On each leg there’s a large cargo pocket with a gusset that allows you to increase the carrying volume. You also get two incoming, zipped air vents and two zipped exhaust vents

As on the sleeves of the jacket, you get adjustable volume straps on the legs. The lower portion of the leg has a zippable gusset that allows the pant to accommodate even the meatiest of off-road boots. Snaps on the hems allow the bottoms to be tightened around whatever boot you are wearing.

Those are the key features on the pant. As we’ve said, all the constructional elements are the same as they are on the jacket.

So what exactly is the Klim Carlsbad? Is it for me?

If you want a waterproof suit that will work on road in pretty much all conditions as well off road, the Carlsbad is the equal of just about anything out there.

Now here at Motolegends we have a kind of preference for a more modular approach to adventure riding, where you would wear a waterproof on the outside of a jacket or pant, but this system does involve some faff. If you want to have more of a one-stop solution you need something like the Carlsbad.

Of course, you are still going to need a thermal solution, because wherever you go in the world there are going to be times when you will get cold. Klim does a simply brilliant goose-down jacket called the Maverick. We think it’s the business; it also wears very nicely off the bike. For the legs, just go for a heavier Merino if it’s really cold.

The Carlsbad is an adventure suit much in the Klim mould, but in black you could also commute in it.

There are obviously other laminated adventure suits out there, but Klim certainly does the all-purpose, adventure suit better than anyone. The Badlands is, in some ways, the obvious choice. But we reckon the Carlsbad is a nicer, more wearable outfit. And there’s a huge difference in cost. The latest Badlands Pro comes in at £2400. The Carlsbad comes in at £1100. In the real world, where it’s not about showing everyone how much you can afford to spend on your gear, that difference is hard to justify.

It perhaps sounds lacking in credibility to suggest that the Carlsbad is a better suit than the far more expensive Badlands. And it is certainly the case that the Badlands has a superior spec., but on an adventure outfit we would always go for lightness and comfort over strength and weight.

This is going to elicit a email from Klim, but we actually think the Carlsbad is a better, more usable and more wearable suit. Sorry Klim!

Click to shop the Klim Carlsbad jacket and pant. 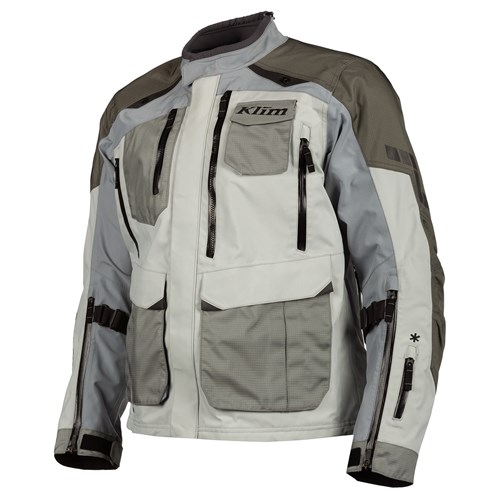 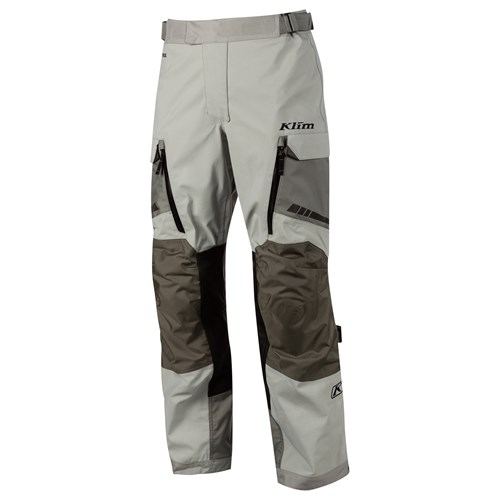