We first saw the Outlander boot when we were at a product development meeting at Klim’s offices a couple of years ago. Ironically, the boot wasn’t part of the presentation. Klim wasn’t planning on selling it in Europe, but we saw the potential, and decided to buy up all their spare stock in the US in order to have a ‘de facto’ UK exclusive.

This new 2021 boot, that goes by the same name as the original, is an improvement upon its predecessor in a number of respects. But the concept is the same. It’s a short adventure-style boot. And it has to be acknowledged that there’s no shortage of those on the market. Normally, the manufacturers merely produce a cut-down version of their in-house, full-height adventure boot. As a result, the boots from TCX, Gaerne, Forma, Falco et al. all look pretty much the same. Yes, these boots do a job, but that kind of expediency simply won’t wash at Klim. They don’t look for easy solutions. When these guys decide to create a new product, they produce a very specific written brief. They give their designers the brief along with a totally blank sheet of paper.

That’s why Klim’s gear stands out from the crowd; and that’s why the Outlander looks like no other short adventure boot you’ve seen from anybody else. Ever! The brief that Klim issued was for a short ankle boot for adventure bike riders. The boot needed to be protective. It needed to be easier to put on and take off than a full-height adventure boot, yet there was to be no trade off in safety terms other than insofar as the height of the boot was concerned. The boot needed to be tough and strong with all the protective features that would be required when riding off the beaten track. The boot had to be totally waterproof. But most importantly it had to be a boot that you could also do a long hike in. Let’s say you find a place to camp overnight. You set up the tent but, before dinner, you decide you want to walk up the hill to get some photographs of the sunset. This would need to be the kind of boot you’d be happy to wear for such a trek, even after a long day in the saddle.

The changes and upgrades

The original Outlander was a heck of a boot. But it was a bit on the clumpy side. From some angles it might even have been considered ugly, and because of the materials it was made from it wasn’t always immediately comfortable. It was a great boot, but it required a certain degree of commitment from a rider.

We liked the old Outlander. It was a great bit of a kit, although it wasn’t always the most comfortable.

The new boot is made from leather, whereas the original boot was constructed from an array of synthetic materials. As a result the new boot is more pliable, softer to the touch and more comfortable. It is in every regard a nicer and easier boot to wear. This doesn’t mean the boot is less protective. It might not be as stiff, but Klim tell us that it’s just as strong. The new sole is different but still pretty aggressive; it’s clearly designed to give you grip in muddy conditions both on and off the bike.

The boot obviously lacks the height you’d get in a full off-road boot, but the shaft certainly gives full coverage of the ankles. The old boot had D3O protectors in the ankles; the new boot has 5 mm XRD cups. Now, much as we love D3O, we kind of agree that D3O ankle protectors are not always particularly comfortable. They tend to be okay in the hot; they soften somewhat after the material has absorbed heat from the foot, but on a cold day when you first put the boot on, D3O protectors can be just too hard. The same goes for the tongue. The old boot had a D3O pad in; the new boot has a softer 3 mm XRD pad.

The new version is just as protective, but the leather makes it much easier and nicer to wear.

Waterproofing comes courtesy of Gore-Tex. Membranes don’t get any better. It is actually possible to get membranes that are technically more waterproof, but Gore’s membranes provide an unbeatable combination of waterproofing and breathability. This means that you can stay dry both from the inside and the outside. However, one of the main benefits of Gore-Tex, in our view, is that any product that uses Gore-Tex has to be approved by the company. A manufacturer cannot simply buy Gore-Tex by the metre in the local market! Gore is a brand; they don’t want products that damage their brand by leaking, and so you can be sure that these boots have beeen properly put together from a waterproofing standpoint. This having been said, no short boot is going to be as waterproof as a tall one.

Of course, one of the most trick features of the Outlander is its BOA lacing system. It’s super strong and so easy to use. Frankly, who hasn’t got frustrated at times with buckles and clips on an off-road boot? The BOA lacing system is so quick and easy to use. You can tighten the boots as tight as you could want, yet easily relax the fit if you overdo it. And the new sequential lacing pattern is also more effective. On the new boot there are more eyelets, and so this distributes the pressure more evenly over the forefoot. The other benefit of the BOA lacing is that it allows you to open up the shaft far more easily to create a far larger entry point. Rare will be the foot that cannot slide into this boot in classic Cinderella fashion.

The BOA lacing system on the Outlander works really well, but ore eyelets make for a nicer fit.

Other features include breathable Cordura panels interspersed with the leather, extra panels of reinforcing TPR material on the heel and toes, black Scotchlite reflective panels, a gearchange pad on the left boot, a hardened toe shield, and a shank in the sole for torsional rigidity.

There are lots of protective overlays on the boot including, on the left foot, one for the gearchange.

At the back of the boot you get a loop for pulling the boot on. The shape of the insole has been informed by the Nestfit programme that has measured millions of feet to determine the optimum shoe fit. The breathable insole is removable and replaceable.

The Outlander is every bit an adventure boot, but one you can walk around in all day long.
Why you want a pair of the new Outlander boots

The Outlander boot provides a unique combination of protection and walking comfort. It really is part-walking boot and part-motorcycle boot.

If you’re riding seriously off-road you might want the protection of a proper off-road boot; in extremis, one of those big Alpinestars plastic jobbies even. The Outlander is obviously a short boot. But it is a highly protective one, and one that is going to be immensely comfortable to walk around in, whether that be scrambling up a mountain side or ambling around some historic, medieval village in the Bourgogne.

They are unashamedly ‘adventure’ in their styling. They would, therefore, look right with any adventure-styled suit and on any adventure bike, but you could just as well wear them with a pair of Rokker jeans.

You should try a pair on. They are not like any other boot out there. But in a good way! 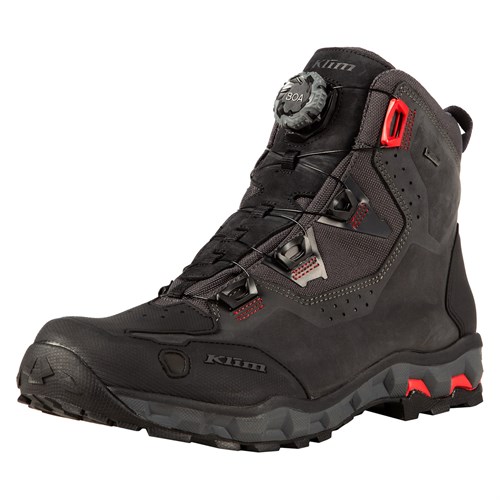 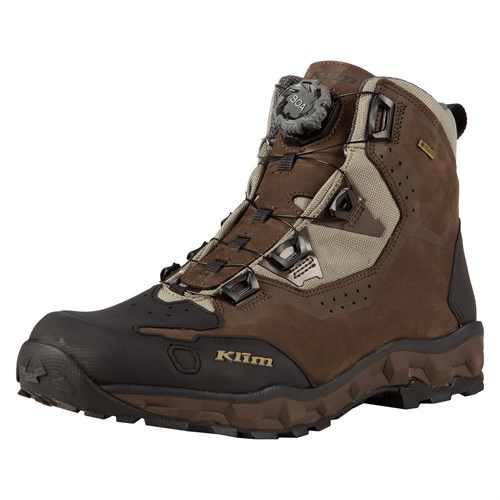