The TCX Hero is probably the best all-round short, classically styled motorcycle boot on the market. And certainly so when it comes to any consideration of value for money.

TCX launched a brown leather boot called the X-Blend about three years ago. It’s still available today, but when it was first released it knocked every other short boot into the weeds. Its combination of looks, comfort, strength and waterproofing was unbeatable. After a year, the distressed brown boot was joined by a nubuck-finish, black version that proved almost equally as popular.

In an attempt to knock it off its perch, Furygan responded with the Caprino boot. Although not quite as comfortable to wear, it was perhaps a little stronger and more rugged and, as it had hoped, Furygan took sales from TCX.

It has a waterproof lining and hardened counters in the toe and heel. There are protectors in the ankles and there's an extra layer of leather over the toes for the gear change. The boot has a heavily treaded sole and a supportive anatomic footbed that makes the boot particularly comfortable to walk around in.

But what distinguishes the Hero from the X-Blend and Furygan’s Caprino boot is the full length zip up the inside of the boot. With a full height gusset, this doesn’t diminish the boots' waterproofness, but it does make them far easier to get in and out of.

On a boot with a zip, what tends to happen is that, initially, for the first week or so, you use the laces until the boots loosen up, and you find the level of tightness that suits you. Once you’ve reached this position, the laces become redundant, and you can then use just the zip to get in and out of them.

Technically, there are tougher and perhaps even better boots out there than the Hero. The Rokker Urban Racer boots and the Magellan and Mulloys are stronger and more protective, and will probably last longer, but those boots take a while to bed in. They are also significantly more expensive. The beauty of the TCX Hero boots is that they are supremely comfortable from the outset. You could buy them one day, and walk up a mountain the next without fear of blisters and aching feet.

But the boot was only available in brown until November, at which point it was joined by a black version. Now to confuse matters a little, the black boot has a Gore-Tex waterproof membrane, as opposed to the non-branded, waterproof membrane in the brown boot.

In theory, one might suggest that a Gore-Tex boot is more waterproof than a boot with a proprietary membrane, although this cannot always be taken totally for granted. A Gore-Tex membrane is considered by many people to be the best membrane. It will withstand a greater pressure of water than most membranes, and indeed this is the key test of the effectiveness of a membrane. Gore-tex is also considered to be more breathable than most membranes.

In general terms, a Gore-Tex product will also often be considered superior because, to use a Gore-Tex membrane, the product has to be inspected and approved by the Gore company. In the case of the Hero boot, however, the two versions are identically constructed, so this is not really a consideration.

But when TCX put a Gore-Tex membrane in the Hero, it put the price up from a more than reasonable £179.99 to a tad pricey £219.99; a premium of £40. Personally, we would have preferred to see the Hero in black without Gore-Tex, and at the existing price. Nobody has ever claimed that the brown boot is not fully waterproof, and the issue is that in heavy rain a short boot will allow rain to come in over the top of the boot. In these circumstances, it doesn’t matter how good the membrane, your feet are going to get wet.

So where does this leave us?

Well, the TCX Hero boot in both configurations is an outstanding boot. Style-wise it’s on the button. It’s protective and supremely comfortable. The brown version is excellent value; the new black Gore-Tex boot, in our view, offers slightly less good value for money, but we do love the slightly roughed-up, waxed leather, and although it is more expensive than the brown version, you still need to pay a lot more money to get a boot that offers anything extra. 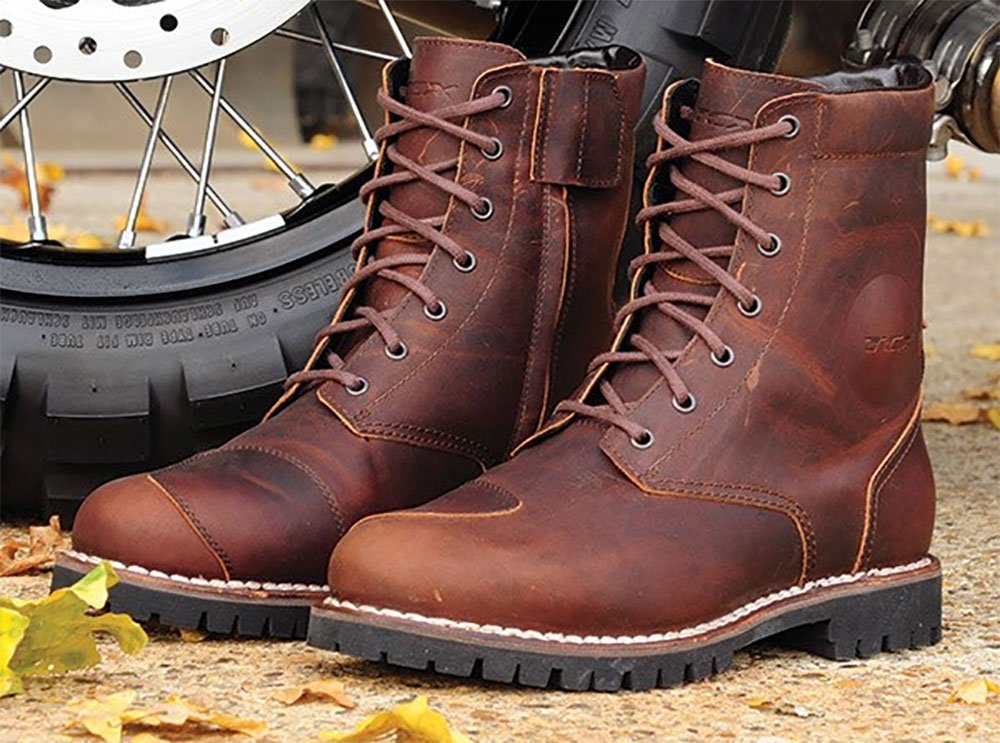