The Naren jacket and its matching Laggan pant constitute a new-for-2022 laminated suit. It will eventually replace the Vansbro/Wish combination that has been a favourite of ours for quite a few years.

Like the Vansbro suit suit, the new Naren outfit has a two-layer laminated construction, which means it will never wet out in even the heaviest of downpours. Two-layer garments are just as waterproof as three-layer ones, but they tend to be more comfortable because, when you laminate a third layer to the fabric, it makes it somewhat stiffer.

Like the Rukka Nivala, the Naren and Laggan contain stretch in their fabric.

But the Naren jacket, and the pant too, have one other thing going for them. The outer fabric contains stretch, making them both particularly comfortable to wear. The only other laminated suit to contain stretch in the same way is the much more expensive Rukka Nivala suit. The Rukka is amazing, but that particular suit costs more than twice as much as this one. Yes, it is a better suit in a number of regards, but it isn’t twice the suit the Halvarssons is.

The Naren is one of the easiest-to-wear and most comfortable laminated jackets we have ever come across. That, of course, is largely down to the built-in stretch. But what also plays a role is the elasticated, concertina panelling in the elbows and behind the neck.

The concertina stretch in the elbows and neck contribute to comfort.

For protection, the Naren comes fitted with Level 2 armour in the elbows and shoulders, but the good news is that it’s not Halvarssons’ usual armour which, frankly, was a bit agricultural. Instead, the Naren comes with the company’s new, much softer, more flexible and better vented armour. This armour is more than a match for D3O, in our view; in fact, we reckon it’s a lot lighter and thinner than D3O’s current Level 2 offerring.

The new Halvarssons’ armour will make a big difference to wearability.

There’s a pocket for a back protector, although it’s not included. Contrary to the above, we would always recommend a Level 2, D3O back protector in this Halvarssons jacket, because the company’s own offering is a bit surfboard-like. The Naren will take a D3O Level 2 back protector in a size known as T8. The jacket is rated AA under EN 17092, which is as much as can be expected of a laminated, waterproof, textile jacket.

AA is pretty much as good as it gets when it comes to waterproof garments.

Where the Naren differs particularly from the Vansbro is that it comes with a fixed Outlast thermal liner rather than a removable one. Outlast is clever stuff. It’s not the most insulating of liners, but it can certainly help you stay warm in colder conditions. It can, though, cool you down in hot weather.

Outlast is clever stuff, but in the Naren the liner is not removable.

The jacket is also potentially well vented, with ventilation zips in the chest and running all the way up the arms. As you would expect, you also get large exhaust vents in the back. Laminated garments, obviously, vent better than drop-liner garments, because when the vents are open, incoming air does not have to pass through the membrane in the way it has to in a drop-liner garment. But there is a bit of an issue here with the Naren because the incoming air will be somewhat impeded by the fixed Outlast liner. So the venting simply won’t be as effective as it is on most laminated jackets.

There are plenty of adjustment mechanisms on the naren jacket. 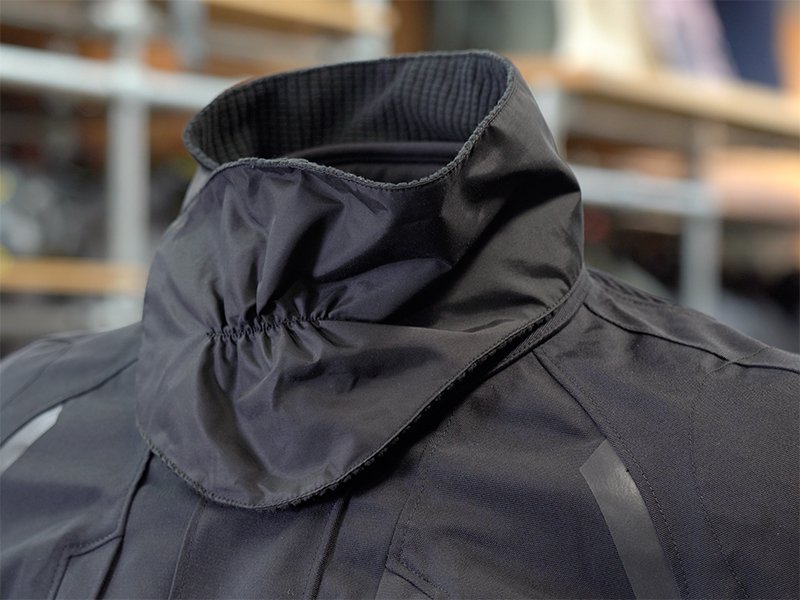 The collar attaches with magnets. You get a black one and a hi-vis. one.

There are two slash pockets with zips on the outside jacket. You don’t get pockets in the lining because of the Outlast, but there is a waterproof, Napoleon pocket beneath the placket.

The Laggan pant in detail

The Laggan pant mirrors the Naren jacket in all key respects. It is laminated, so will never wet out. The material contains stretch; you also get concertina stretch in the back below the belt line, but also above the knees. The pants, obviously, are rated AA. They come with Halvarssons’ latest Level 2 armour in the knees and hips. You get the same fixed Outlast lining. And therefore the same potential issue when it comes to the effectiveness of the vents, which in the case of the Laggan pants are to be found on both thighs.

As with the jacket, concertina stretch will contribute towards comfort.

We really like the elasticated waist adjusters on the Laggan. They are an improvement on the systems used historically on Halvarssons’ pants. In the lower half of the legs are long zips that will allow you to wear the pants over pretty much any kind of touring boots. There is then a Velcro flap that will allow you to cinch the bottom of the leg tightly around the ankle.

Adjusters abound. Shown here at the waist and at the ankle.

So where do we get to on the Naren and Laggan?

Our starting point is that most people really don’t need laminate gear. Word is out that laminate garments can be better, in some circumstances. And so many motorcyclists have convinced themselves that they have to have a laminate jacket and pant before they go out in the rain.

You do not need laminate garments to ride in the rain. You just don’t!

And in that belief they are simply wrong. Drop-liner garments can be completely waterproof. The benefits of laminate jackets and pants only really come into play in two sets of circumstances. The first is if you find yourself in heavy rain for four hours or more, and that’s because in that kind of prolonged assault a drop liner garment will start to ‘wet out’. The second is if you have a daily commute of an hour or more each way. In heavy rain on such a commute a jacket or pant will never ‘wet out’, but you may well arrive into work with a damp clothing. And there’s a chance that it won’t have dried out totally when it come to riding home of an evening. On a cold, winter’s evening, nobody really wants that.

But very few people will find themselves in these scenarios. The rest of us will normally be better off in a drop liner outfit. Now the Naren and Laggan make for a great combination, but for the same money you could buy into our favourite drop-liner suit: Halvarssons’ Wien and Wish combination. The Naren suit will, on rare occasions, perform better, but the Wien and Wish always will be warmer and more comfortable. And because of the fixed Outlast liner, the Wien and Wish may be cooler too.

The Wien and Wish combination will always be warmer and more comfortable.

If you’re not a long-distance commuter and if you don’t do a lot of high-mileage, international touring the Naren and Laggan will serve you better than the Wien and Wish on perhaps one ride in 100, perhaps one in 200, or even 500. For all your other rides you will be better off in drop-liner combination.

Do not misunderstand; the Naren and Laggen make for a fantastic, easy-to-wear, outfit at a more than affordable price. It looks to be a great suit. It’s got a lot going for it. And, at under £900, it’s well priced. But if you don’t really need a laminate suit, there are better options out there. By the same token, if you do put in huge miles, and if you’re the kind of rider who really needs laminate, you might well find you’re better off with something more robust from somebody like Rukka, Stadler or Klim.

If you’re somebody who really needs a laminate suit, there are better options.