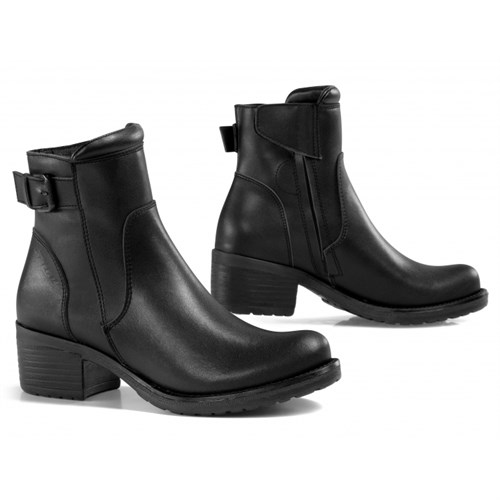 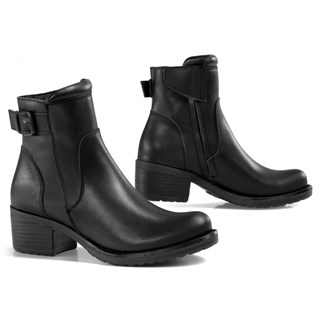 The Falco Ayda Low is a shorter-shafted version of a boot that has been in the Falco range for a number of years; a boot that is simply called the Ayda. Now even the standard Ayda is not what we would call a tall motorcycle boot. It comes halfway up the calf and fits quite snugly around the leg, but the Ayda Low is more in the mould of a traditional ankle boot. The boot is made from a full-grain leather. It comes with a waterproof membrane, and entry is by means of a zip on the inner side of the boot. It’s fully CE approved as a motorcycle boot but, for a number of reasons, we would classify it more as pillion footwear than rider footwear. First, sturdy as the outer leather is, there’s no gearchange pad. Now this is not a mandatory, and there are many men’s boots that similarly lack a reinforcement for the gear lever, so that’s not a clincher. But the reason we think most women will not be able to ride in this boot is because it has quite a chunky heel. Now we can see the benefit of a heel. It will add a touch of elegance to any biking outfit and, of course, for those who need it, it will add a touch of height. But, unless you’re very lucky with your choice of bike, a heel like this is going to potentially make it difficult to change gear. You simply won’t be able to move your left foot forwards and backwards on the peg; your foot position will be fixed, dictated by where the heel sits behind the peg. It has been put to us that some ladies who liked the Ayda didn’t get on with it because it fitted too tightly around the calf. Well, if that is an issue for you, the new, lower iteration may work much better.
Read more