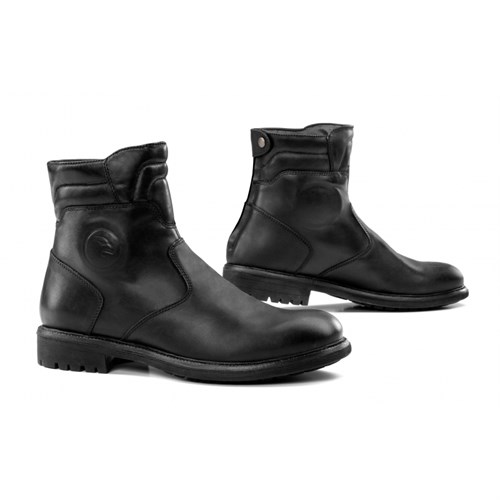 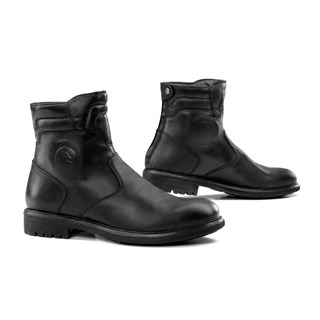 This is, we think, the kind of motorcycle boot that many people are looking for, but it doesn’t really embody a very cool look, so there aren’t many boots like it out there. First thing is that it’s a boot that you could wear into work. So, okay, even we wouldn’t recommend commuting in a boot five days a week, and then wearing the same boot all day. That’s probably not going to work, but if if you want a boot that works on the bike, and that looks smart enough under a pair of work trousers, then the Legion 2, as it is known, might be the boot for you. But it has a couple of other qualities that mark it out as something a bit different. First, of course, the boot has no laces; and a lot of people who would prefer to ride in a short boot wouldn’t go near a boot with laces. Some people just don’t trust them. The other thing we really like about this boot is that it has a zip up the back. This really does make the Legion 2 a particularly easy boot to get in and out of. TCX produced a boot called the Staten that purported to do the same thing as the Legion 2, but it didn’t really work, and is clumsy and somewhat ungainly by comparison. We haven’t worked with Falco for long but, no pun intended, they don’t often seem to put a foot wrong. And the Legion 2 is yet another impressive offering from the Italian brand. The spec. is pretty comprehensive too. Full-grain leather. A High-Tex waterproof membrane. Counters front and back. D3O in the ankles. Full-height zip entry. A Commando-style outer sole. If you’re a Bike Shed sort, always in search of the last word in hipsterdom, this boot probably isn’t for you. But it’s comfortable, smart, protective, highly spec’d and eminently sensible. For some people this boot will be the holy grail.
Read more