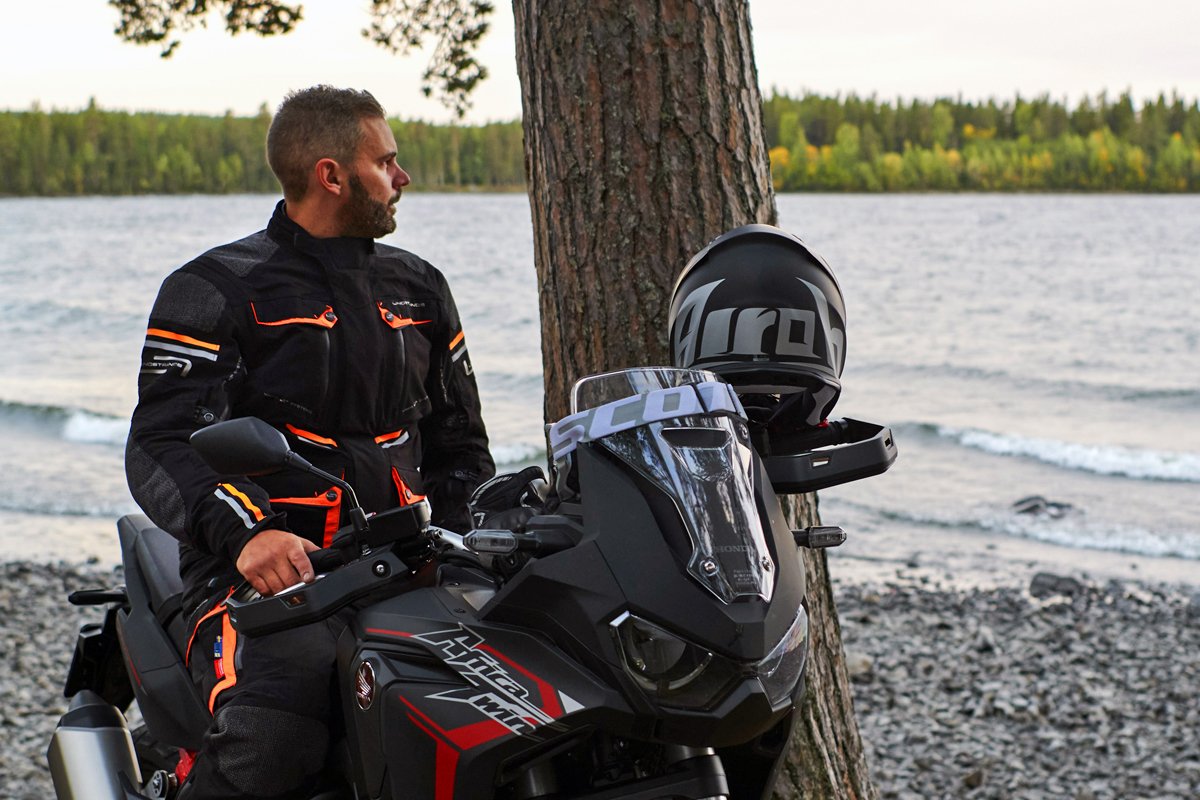 The Sunne is another new-for-2021 style from Halvarssons. It replaces the Luxor jacket and Lux pant combination that has now been discontinued. Like its predecessor, the Sunne is a laminated outfit, and in styling terms it is very much aimed at the adventure-bike rider. Now here let us make the point we always make when we’re reviewing a laminated, adventure suit. If you’re a serious adventure rider and if, as a consequence, you spend a lot of time riding off road, then you really don’t want a laminated suit. Any membrane is going to impede a garment’s ability to breathe. And if you’re riding off road and getting hot and sweaty, breathability is all. A membrane will diminish the effects of body perspiration, and perspiration is the body’s way of cooling itself down. A membrane will also prevent cool, oncoming air from reaching the body. It’s why we would have to say that, despite all its adventure-bike styling, suits like this should really be considered as road suits for those who want to share in the adventure aesthetic.

Not that this is to take anything away from the Sunne. In concept, it is the same as a number of so-called adventure suits from people like Klim, Rukka, Belstaff and others. But the fact is that, despite their off-road capabilities, very few adventure bikes do actually stray off the beaten track. And so, for most adventure bike owners and riders, a suit like this will be exactly what is required.

If you ride an adventure bike mostly on the road, then the Sunne may be the suit you’re looking for.

Now the Luxor/Lux was not a bad suit and, in terms of functionality and design features, the Sunne is very similar, although in the way it has been put together there are differences. The main and most obvious difference is the outer fabric. The Luxor had been treated with a rather over-the-top Teflon DWR; it made both the jacket and the pants rather crispy and, as a result, not particularly comfortable to wear.

The Sunne has a much softer ‘hand’ as it is called. It makes the Sunne far more comfortable to wear than the Luxor/Lux ever was. Like that suit, the Sunne’s outer fabric has been treated with a DWR, but a much more benign one. Of course, the real waterproofing on the Sunne comes not from the DWR, but from the 2-layer, Dryway laminated membrane.

In this review, Chris talks us through the Sunne, and as ever he tells us the good, the bad and the ugly.

Now for those of you not into technical gear, we should explain that when a membrane is laminated to the inner surface of the outer fabric, the rain cannot pass through the outer material. A laminated jacket will not necessarily keep you any dryer than the more traditional, drop-liner waterproof membrane, but a laminated jacket can be warmer in certain circumstances because it will not soak up water and become ‘wet out’. The problem can be that if a garment gets too wet when it’s cold, heat from the body is conducted away from the body far faster than would be the case if the jacket were dryer. And that’s because heat conducts far faster through a wet medium than a dry one. A laminated garment will also dry out much faster than a drop-liner garment after a spell in the rain, because it won’t be holding on to anywhere near as much water. This makes laminated garments the preferred choice for those who do more than, say, 15,000 miles a year, and for those with long daily commutes.

We have, historically, taken the view that traditional drop-liner garment are still probably more appropriate for the majority of motorcyclists, but in truth that is a changing feast as laminated garments become ever more comfortable and ever more affordable. Already, we can see a situation where, in a few years’ time, only the very cheapest and most basic outfits will come with drop-liner waterproofing. But let us be clear; we’re not there yet!

Laminated is not for everyone, but unquestionably a laminated suit vents better than a drop-liner one.

One of the reasons that manufacturers of waterproof adventure-style outfits often prefer laminated membranes to drop-liner ones is that, when there is an open vent it will be particularly effective, because the air will pass straight through to the body. With a drop-liner garment, incoming air still has to pass through the independently-suspended membrane; and as a waterproof membrane is also a windproof membrane, air will not easily pass through it. Now, the Sunne is well equipped with vents, both in the top and bottom halves. There are vents on the chest, super-long vents up the arms, a permanently-open back vent, and vents on the fronts and the backs of the thighs. So, having said that for serious off-road adventures you don’t really want a waterproof membrane, it is undoubtedly true that a laminated membrane is going to be better at flowing air than an equivalent outfit with a drop-liner membrane.

Halvarssons take safety very seriously, so on the Sunne there are no compromises on protection.

From a safety perspective, the Sunne gives you all the protection you need for proper, on-road riding. In all the key areas, the suit is lined with panels of Hi-Art, an abrasion-resistant fabric designed by Halvarssons, and that increases the strength of a textile fabric by 500%. You get Level 1 protectors in the elbows, shoulders, knees and hips. And there’s a pocket for a back protector, although we would always prefer to fit a D3O Viper protector to the one that Halvarssons supply.

Now because the Sunne is also intended for road riding, it comes with removable thermal liners in both the jacket and pants. The insulation material in these liners is called Innoborne; Innoborne is a kind of Thinsulate alternative. It works well; and we know this because Halvarssons has used it in a number of their previous jackets.

Although the Sunne has the look of an adventure outfit, it has all the comforts you’d expect for the road.

Most of the other stuff is detail. One of the most important of these details is the elasticated side straps that enable the jacket to be cinched in at the waist. You can let the jacket relax a little if you are wearing extra mid layers or, when you’ve removed the thermal inner layer in warmer weather, you can cinch the waist to prevent the jacket from flapping as you ride. But you get adjusters all over the Sunne; at the neck, on the sleeves, at the sleeve ends, the hem of the jacket, the bottoms of the legs and so on. Pockets on the Sunne are in plentiful supply; there are loads of them, including a large cargo pocket on the leg of the pants and a map pocket on the back of the jacket. There are zips on both halves, so that you can connect the jacket to the pants. The neck collar is detachable. And the trousers also come with braces.

We are not huge fans of all the hi-vis built into the Sunne, but Halvarssons’ rationale makes sense.

The jacket comes in two colourways. We personally prefer the one shown on the left. We have to admit that we are not particularly taken by the hi-vis elements on this suit. We don’t think hi-vis looks right on an adventure suit, but Halvarssons hails from Sweden where they spend 50% of the year in perpetual darkness, (well, almost). There are lots of adventure bikers in Scandinavia, and Halvarssons takes the view that visibility comes higher on the agenda than authentic, off-road styling, so that’s why they’ve built into the suit a bit more hi-vis than some brands have. Fair enough!

There’s one other minor(ish) issue that we have with the Sunne, and it’s the trousers. They only come in one leg length and, at the premium end of the market, that is not enough. It will count out around 50% of those who might want to buy the suit. There is a right and a wrong leg length for a trouser; and on the Sunne if you are less than 5’ 4” or more than 6’ 2”, there’s agood chance that the pants will be too long or too short, respectively. Halvarssons should have come up with one colourway of pant to match both jackets, and then produced the trouser in at least two, and preferably three, lengths. Fingers crossed for next season!

With a wide opening, you can fit any adventure boot in the Sunne, but there could still be a length issue.

So, let’s summarise. The Sunne, in stylistic terms, is a suit in the adventure-riding mould. But it’s actually more suited to the rider who rarely, rather than regularly, goes off road. By contrast, it’s a great road suit. It’s comfortable, protective, and has all the features you would expect of a high-end suit. And as a laminated suit it’s going to work well for commuters and those who do serious mileage. And as a laminated suit it’s also going to be a particularly well vented. It comes in two colourways and a wide array of sizes and, although we have made our point about leg lengths, if you’re of average height the chances are that the Sunne is going to work very well on you. And, if it does, you’ve found yourself an excellent laminated suit. At a reasonable price. 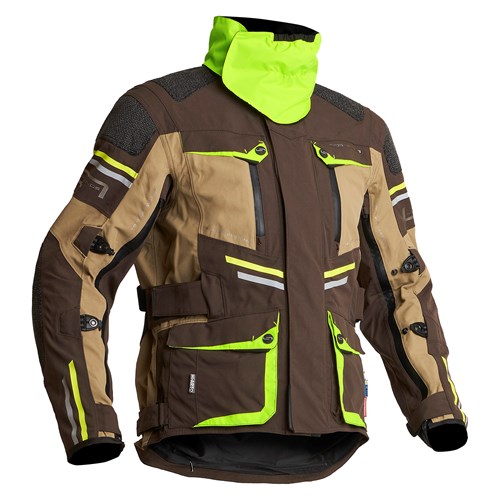 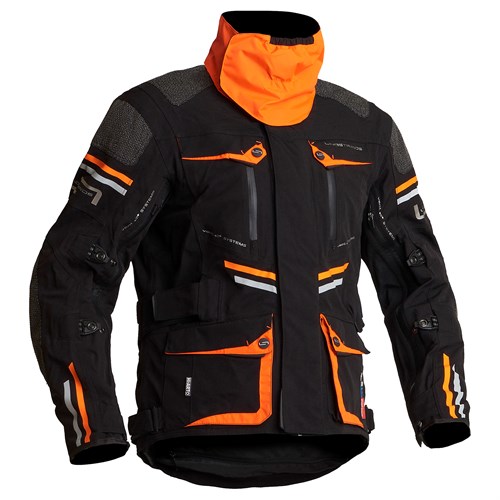 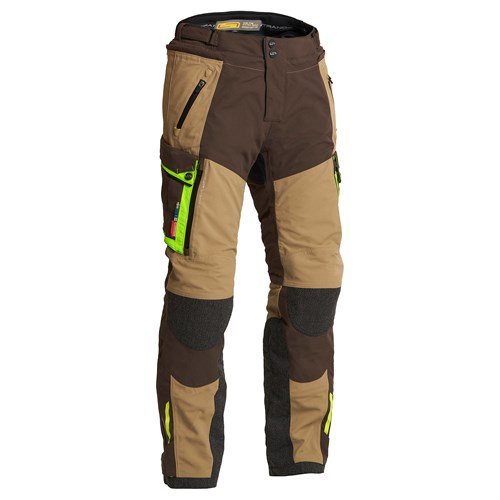 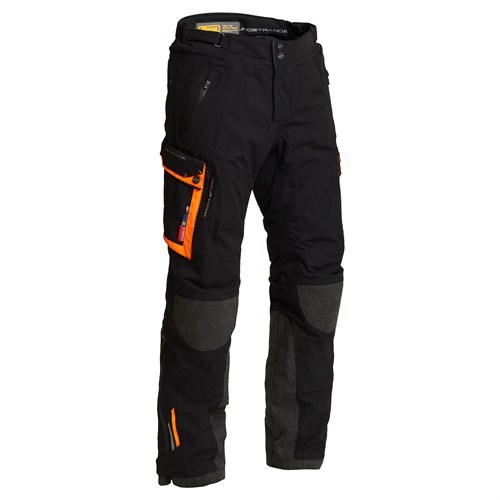