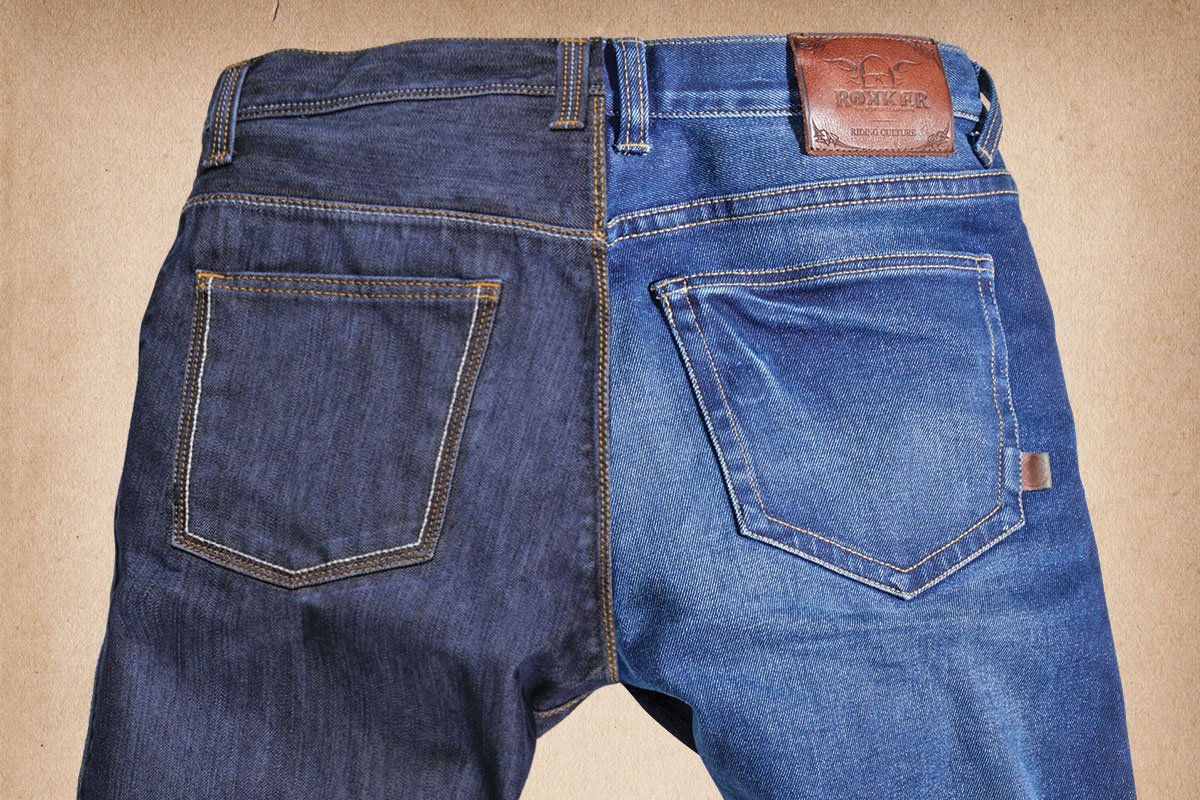 ROKKER REVOLUTION JEANS vs ROKKER ROKKERTECH JEANS
WHICH IS BEST FOR YOU?

Rokker is a rather special company; a 21st Century producer of motorcycle clothing of the highest order.

There are brands out there that are known for their technical prowess; the quality of their construction, their reputation for waterproofing, or the robustness of their materials. And there are producers who make beautiful and fashionable protective wear; clothing that is stylish enough to wear anywhere; bike or not.

But there are very few who succeed in combining the two. In fact, we know of not one other than Rokker. The two guys who set up and run Rokker, Michael and Kai, are pretty hardcore. They’re proper, old-skool, custom Harley guys who live for bikes.

But about 10 years ago, they quit their proper jobs and decided to produce the best quality and most stylish gear they could. They developed a relationship with the Swiss technical company Schoeller Industries, and started to create ranges of jeans, leather jackets, boots and so on. They were determined to make gear that worked. But they also wanted to make clothing that they and their pals would want to ride in.

Their stuff is the best of the best. Quality-wise, it’s totally without compromise. But all their gear looks great and is terrific to wear. But as it was in the very early days, it’s still probably true to say that denim jeans sit at the heart of Rokker’s endeavour.

Until now, their defining product was their unique, totally waterproof, Revolution jean. But recently the company launched an equally amazing product that is, in many ways, just as outstanding. It’s a jean called the Rokkertech.

So let’s take a look at the two jeans, in an attempt to explain the differences. The Revolutions are single layer, so they have no internal Kevlar-style lining. This means they’re lightweight, yet they’re still strong because the outer material is woven from a mix of denim and Schoeller’s super-strong Dynatec fabric. What makes them so special, though, is the C-Change membrane that is bonded to the inside of the outer layer. It is this that makes the jean totally waterproof.

And we are talking totally waterproof. Six hours in heavy rain waterproof. Laminating the membrane to the inside of the outer fabric is why a Rukka jacket or trouser is so waterproof. And basically the Revolution is constructed in just the same way.

It’s the only truly waterproof jean in the world; and it’s perfect for the British climate. They’re also lighter than your average pair of high street denim jeans. But the Revolutions have one more trick up their sleeve. The molecules in the membrane open up to let heat escape when it’s hot. They close up when it’s cold, to keep heat in.

This won’t mean you’ll stay warm on a really cold day or cool on a really hot day, but they will take the chill out of a coolish morning ride, and will cool you down a little when it’s warmish. Until now, the Revolution has been the lightest and coolest jean you could buy. For some, the waterproofing has been simply a by-product.

But then, earlier this year, Rokker introduced a new jean called the Rokkertech. It’s quite different to the Revolutions; better in some respects, not so good in others. 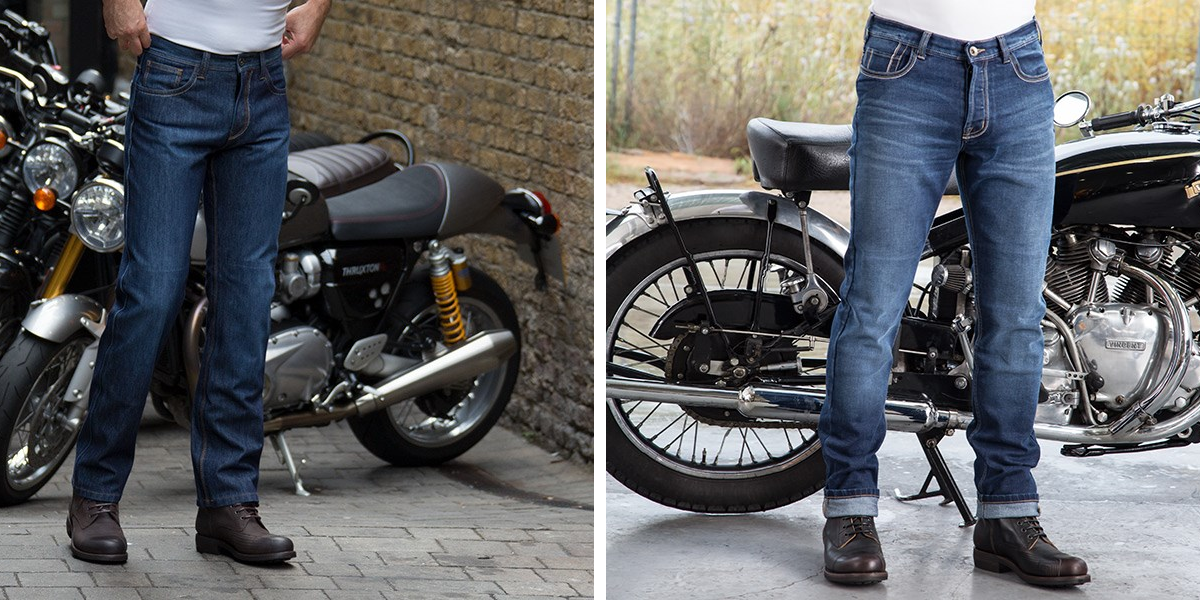 The Revolutions (left) are single layer, so they have no internal Kevlar-style lining. This means they’re lightweight, yet they’re still strong because the outer material is woven from a mix of denim and Schoeller’s super-strong Dynatec fabric. The Rokkertechs (right) are single-layer. But the material is very different. It’s called Armalith, And it’s the strongest wearable fabric; it’s insanely strong.

Like the Revolutions, the Rokkertechs are single-layer. But the material is very different. It’s called Armalith, and it’s the strongest wearable fabric known to man; it’s insanely strong. On the internet, there’s a video of a Hummer vehicle being hoisted aloft with a pair of Armalith jeans attached to a crane.

In abrasion-resistance terms, the Rokkertechs are better than the Revolutions. Both, however, come with Rokker’s unique abrasion guarantee which means that, if you hole them in an accident, you’ll get a new pair; it’s an offer they’re prepared to make because they don’t think it’ll ever happen on the road.

Leather has a ‘slide-time’, as measured by the CE test, of between four and four and a half seconds. The Revolutions would last just under three seconds according to the company. The Rokkertechs will be closer to four seconds.

But slide times of this order are somewhat academic for, on the road, if you have an accident, you don’t slide for four and a half seconds, or even four, or even three. On a track you might slide for a number of seconds, but on the road you will roll and tumble. It’s most unlikely that you’ll ever slide for even two seconds on one part of your body. And, if you do, you’ve probably got bigger problems!

Now, the downside of the Rokkertechs is that, unlike the Revoutions, they are not waterproof; not waterproof at all. If it rains you will get wet. It’s as simple as that. But because they have no membrane, they will breathe much better than the Revolutions and so, when it’s hot, say in the upper twenties or thirties, the Rokkertechs are going to be much cooler to wear.

You see, the Revolutions are incredibly light in weight, but when the temperatures are high, the membrane may not be able to cope with the levels of perspiration you’ll be generating, and so you’ll start to feel a little sticky.

No such problem with the Rokkertechs. Air will flow in and out of the outer material as though it were regular denim. The downside? When it’s cold, you could get a little chilly. Nothing, though, that a pair of merino leggings wouldn’t resolve.

The bottom line is that both jeans are amazing; they’re both at the top of their game. For 50 out of 52 weeks of the year in this country, the protection from the elements makes the Revolution the preferred choice in our book. But for sheer comfort, and riding in hotter weather, the Rokkertechs win by a nose.

In a perfect world, you’d have a pair of each, and then you’d be covered in just about all conditions.