We had often been asked for recommendations with regard to lotions and potions that could be used to look after a leather jacket. In truth, we didn’t really know what to recommend. People like Nikwax and Storm market various general purpose treatments, but we didn’t really know too much about this particular field. But, a year or so ago, I found myself having a conversation with the leather buyer for one of the jacket manufacturers. He’s a chap who knows his onions. He’s been in the leather business most of his working life, and he has a great passion for leather, how to look after it, how to make it nicer to wear, and how to make it last. His secret, he told us, was a not-especially-well-known-over-here range of products from a small American company called Chamberlains. In fact, I don’t think they’re even particularly well known over there. They’re a small company, but our friend reckoned that their products were simply the best; he told us that he used their lotions and potions all the time to protect, clean and restore his leather products. There are three main products in the collection: No.1, No2 and No.3. We had a delivery in just before Lockdown, and we’ve just had a second shipment in this week. We have used it successfully on a number of pieces, and a few of our clients have written to us, raving about the stuff. It’s in stock again now, but if you’d like to check it out in a bit more detail, it’s all on the website. 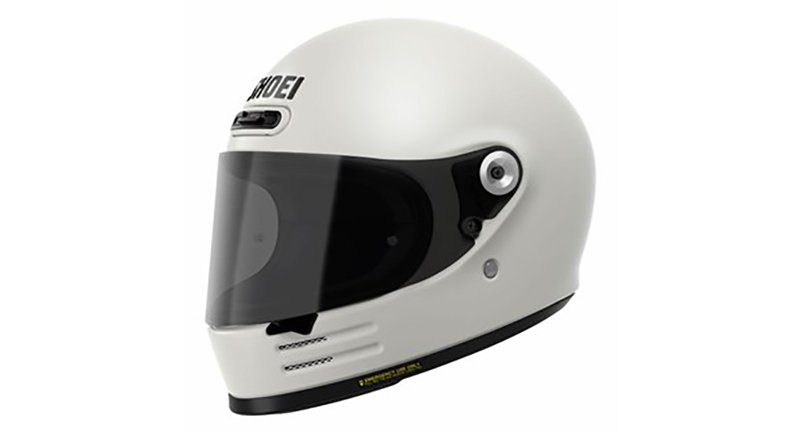 Tinted visors have long been promised by Shoei for the new Shoei Glamster. But the Coronavirus has put a delay on this particular accoutrement, such that none are expected to become available until the middle of 2021. And so we have sourced a dark visor though a British supplier: Bob Heath Visors. The visor fits the Glamster perfectly, and will be no different to the dark Shoei visor when it does officially get released. But let us be clear about these visors and their legality. Even though these visors have been tested to meet all the relevant standards under BS 4110, they do not meet the requirements for light transmission. This means that they are technically illegal for road use. Now under another standard (BS 2724) for general purpose sun glare protectors that can be used, for example, for car driving, there is a recommendation that light transmission should be between 18% and 29%. Bob Heath’s visors allow a transmission of 20%. They may not, therefore, be totally legal, but they are not irresponsibly so. In reality, most Traffic Police officers will turn a blind eye to a dark visor provided you are riding responsibly. A different view might be taken if you are riding at night or in conditions of poor visibility. And in this case, you should be prepared to accept the consequences. A dark visor offence is not usually endorsable but, in certain circumstances a dark visor may affect your insurance. But you should also be aware that actually, in certain circumstances, riding with a dark visor may well be safer than riding with a clear visor. Of course, wearing sunglasses inside your helmet is an option, but these may well block out more light than a dark visor. And when riding, it is much quicker to raise a visor if it suddenly gets dark than it would be to remove a pair of sunglasses. But the legal position is clear whenever a visor isn’t! Dark visors are illegal, and are not for use on the road. If you buy one, you’ll have to make your own mind up. But they do look really cool! One final piece of advice. Whenever you ride with a dark visor, carry a clear one with you. At all times! Finally, when the official Shoei dark visor is eventually released, it will be equally illegal! 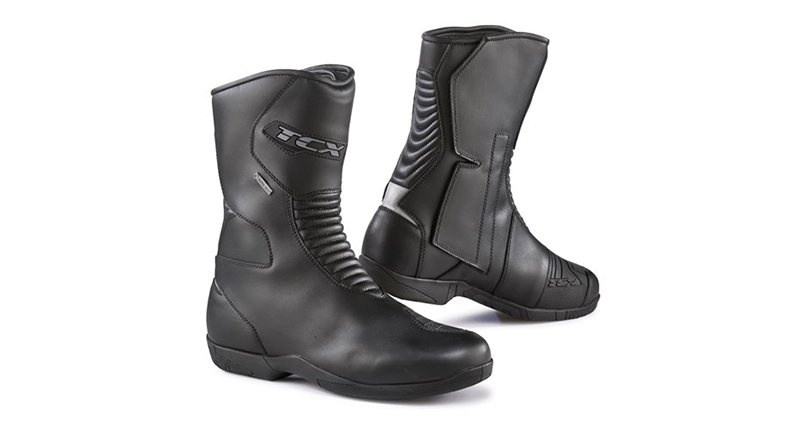 Here at Motolegends, we can be a bit picky. And we don’t follow the crowd. When it comes to the kind of boots that you can wear for touring and commuting, we tend to gravitate towards Daytona. Frankly, we think they make the best, most comfortable and most durable boots that money can buy. But they’re expensive at the point of sale, and so not everybody can stretch to a pair. The problem is that we have not found it easy to source the boot that sits one rung down from a Daytona. There are lots of good, cheapish boots on the market, but we wanted a top quality, leather, Gore-Tex boot that we could offer, with confidence, to those who didn’t want the Daytona. Our first choice was TCX; they make some fantastic, short boots. Their quality is beyond doubt, and their prices always represent good value. But in the UK there wasn’t a TCX that fitted the bill; and so we went direct to the manufacturer in Italy, and we’ve sourced the TCX X-Five.4 GTX boot that we reckon fits the bill. The chassis, as we’ve suggested, is a full-grain leather. There’s concertina padding in the heel and fore-foot for comfort and flexibility. There’s an integrated shift pad, and you get reinforced counters in the heel and toe areas. Closure is by means of a Velcro storm flap, and to make the boots easier to fasten the zip sits in an elasticated panel. The sole is torsionally very stiff; it is also high grip and oil resistant. This is, in every way, the boot we were looking for. It’s a thumping good and supremely comfortable boot. In the margin, it’s not quite a Daytona, but then that’s reflected in the more than reasonable price. In the UK, the TCX X-Five.4 GTX boot is totally exclusive to Motolegends.

Moto-Skiveez back on the shelf

Moto Skiveez were invented by a guy in Utah. He was a semi-professional cycle rider, but also a keen ‘iron butt’ motorcyclist. He figured that he could apply the same thinking that is incorporated into a cyclist’s short, and apply it to underwear that could be worn by motorcyclists. He went over to a research facility in Switzerland that develops cycling shorts for all the major cycling brands, and he set about the task of creating a range of shorts that would allow motorcyclists to stay in the saddle for longer. Today, there are shorts for those who ride cruiser bikes, those who ride sit-up and adventure bikes, and those who ride sportsbikes. Do they work? Well, judging by the response of customers who have bought a pair, we would say so. And that’s because almost everybody who buys a pair seems to come back fo a second pair! Now we were not able to get hold of stock during Lockdown. Our friend Shawn, who owns the company, was working, but his factories were not. Well the good news is that this week we received re-supplies of all three types in all sizes. If you regularly suffer from a sore butt when you ride the bike, a pair of Motoskiveez might just be the answer. 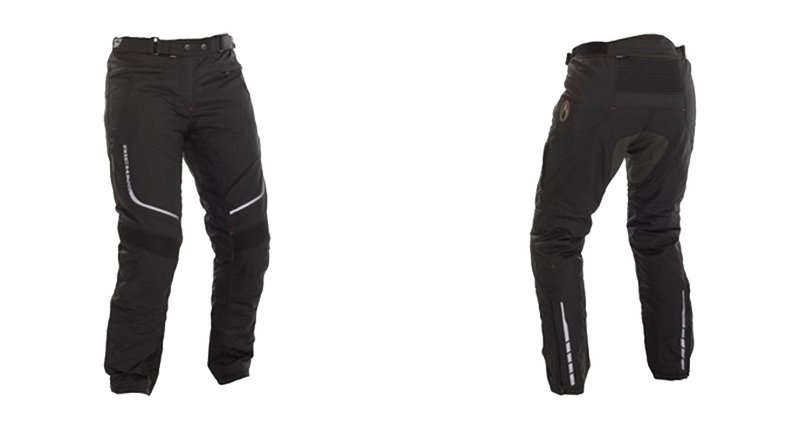 This is the final missing piece of the Richa Infinty 2 Pro jigsaw. It has been long anticipated, but has been the subject of just about every conceivable delay and hold up. But now they’re here. This is the ladies’ version of the Richa Colorado 2 Pro trouser. And obviously it matches to Richa’s Infinity 2 Pro ladies’ jacket. Like the jacket, the trousers are laminated but, in the case of the trousers, there’s a mix of two and three layer lamination involved in the construction. Down the legs are two large vents that are fully waterproofed by means of YKK zips. For warmth the trousers come with a detachable thermal liner. The armour is by D30. It comes as standard in the knees, but is an optional extra for the hips. In the bum there’s what is known as a Contra-Glide panel that stops movement and sliding in the saddle. Accordion stretch panels above the knees help make the trousers comfortable to ride in. There’s a short connecting zip that allows them to be connected to the jacket. Interestingly, the trousers come in two leg lengths, and given that they go up to 6XL, there won’t be many who cannot be accommodated in them. But perhaps the most interesting feature of these trousers is their cost. At just £230, the cost is pretty amazing. Combined with its matching jacket it makes for an all-singing-all-dancing laminate suit that comes in at less than £500. More like this at this price and we won’t be able to stay in business. This quality for this price. It’s unseemly! 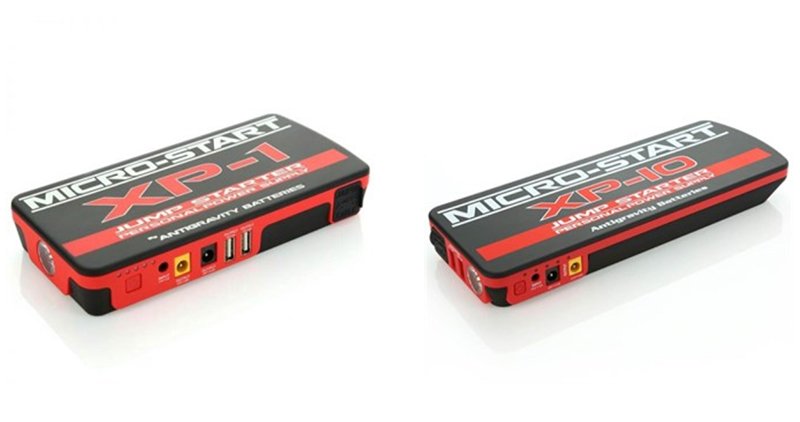 A new delivery of Micro-Start XP-1s and XP 10s

If ever I am travelling anywhere much beyond the county border I always try to make sure that I am carrying my Micro-Start power pack with me. I have to be honest with you; they are not inexpensive. Without doubt you can find cheaper. Most car and bike mags. have ads. for such devices, and I’m sure you could save a lot of money if you bought one at Halfords. But personally the extra cost of a Micro-Start I kind of justify as a kind of insurance policy. The problem is that, technically, all Starters do pretty much the same job. You have a flat battery. You connect the pack to the bike’s (or the car’s) battery and the engine turns over and fires. Except it never seems to be as simple and straightforward as that. And that’s because you never get a flat battery when you’re at home, at work, or on the forecourt of a motorcycle repair shop. You get a flat battery only when getting a flat battery is horribly, horribly inconvenient. You’ll be in the middle of nowhere. It will be dark, cold and probably raining. And, of course, there’ll be no phone signal. No problem! You’ve got a starter pack that you got a great deal on at your local BP station. You connect it up, hit the starter. And nothing happens! It’s frustrating, and at times like this you really wish you had dug a little deeper and bought a better known brand of starter pack. Can we guarantee that the Micro-Start will never let you down? No, we cannot; but I can tell you that my XP-10 has never let me down. There’s no bike it won’t start with ease. But it has brought to life my old Toyota FJ40 after it hadn’t been started for 18 months. It coped similarly easily with Sara’s Corvette that had died over the winter. Now, you should check out the spec. on the website to work out which model is right for you. The XP-10 is more powerful, but it’s bigger and will take up more space if you’re short on load capacity. The XP-1 is still plenty powerful, but it has its limits, and won’t cope with high-compression twins or large diesels. Check out the specs. on the website.