As I write this article in mid-August, I have a slight sense of having missed the boat, for the heatwave we have experienced throughout July and early August is already beginning to feel like a freak of nature, probably not to be experienced again for another 30 years.

It therefore seems potentially poor timing to be talking about Macna’s Cooling Vest as our August Product of the Month. But, in truth, whilst we have basked in unseasonably warm temperatures in recent weeks, the Macna vest is probably best suited to conditions that are even more extreme than those we have recently witnessed. It has been designed to keep you cool as you cross the African savanna, or the arid deserts of India, although it will also come in handy closer to home in the countries of southern Europe. I suppose we’re talking about temperatures of 30 degrees and above. In these kinds of conditions, a mesh vest or generously vented jacket, will only do so much good, as all they will do is increase the flow of what will undoubtedly be stiflingly warm air. In this environment, to an extent, it matters not what you wear, how much or how little; the fact is that you’re going to be hot. 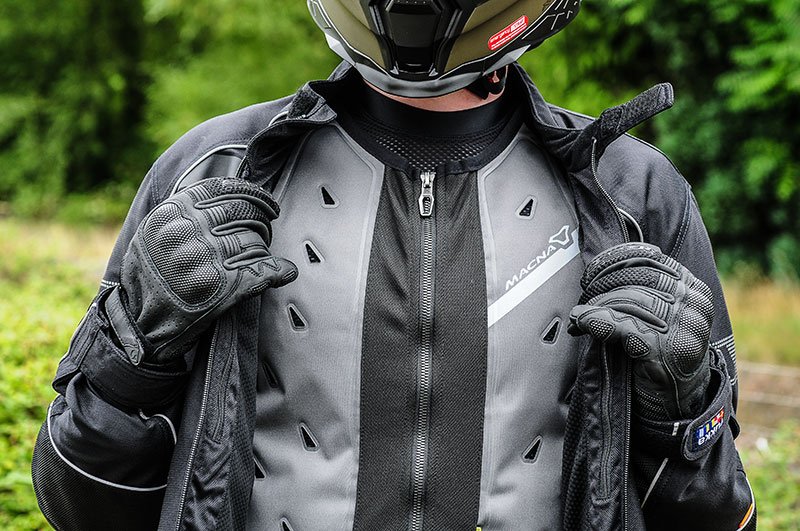 Sat here in Blighty it is sometimes difficult to imagine weather that is too warm for riding. We spend so much time in the cold and the rain that any form of warm weather seems infinitely preferable to the permanent chill we experience most of the year round. But over heating on the bike can be a very serious affair. If it goes on for too long, it can lead to dehydration. As the body loses fluid, the heart will pump faster to maintain blood pressure. As the level of dehydration increases, the body weakens and the brain becomes confused. I experienced this once, riding off-road in Mexico. Ironically, given what I do for a living, I was wearing all the wrong gear. I had been working hard on the bike. I was not taking in any fluids, but didn’t think I needed to. A few hours hours into the day I started to lose concentration I began falling off the bike at the slightest obstacle. I became fixated on rocks and trees way off the beaten track. I found myself riding towards them, and crashing the bike. I was in trouble, and was lucky that the guide had the presence of mind to recognise what was going on. He dosed me up with electrolytes and energy sachets. After half an hour or so, I was back to my more normal levels of incompetence. The problem is that, on a bike, especially on the road where there might be other traffic, a lack of concentration can be a killer. Riding a bike when you are nauseous and lightheaded is an accident waiting to happen. All this sounds somewhat alarming and, of course, it can be but, for conditions like this, Macna’s Cool Vest could be the best friend you’ve got. 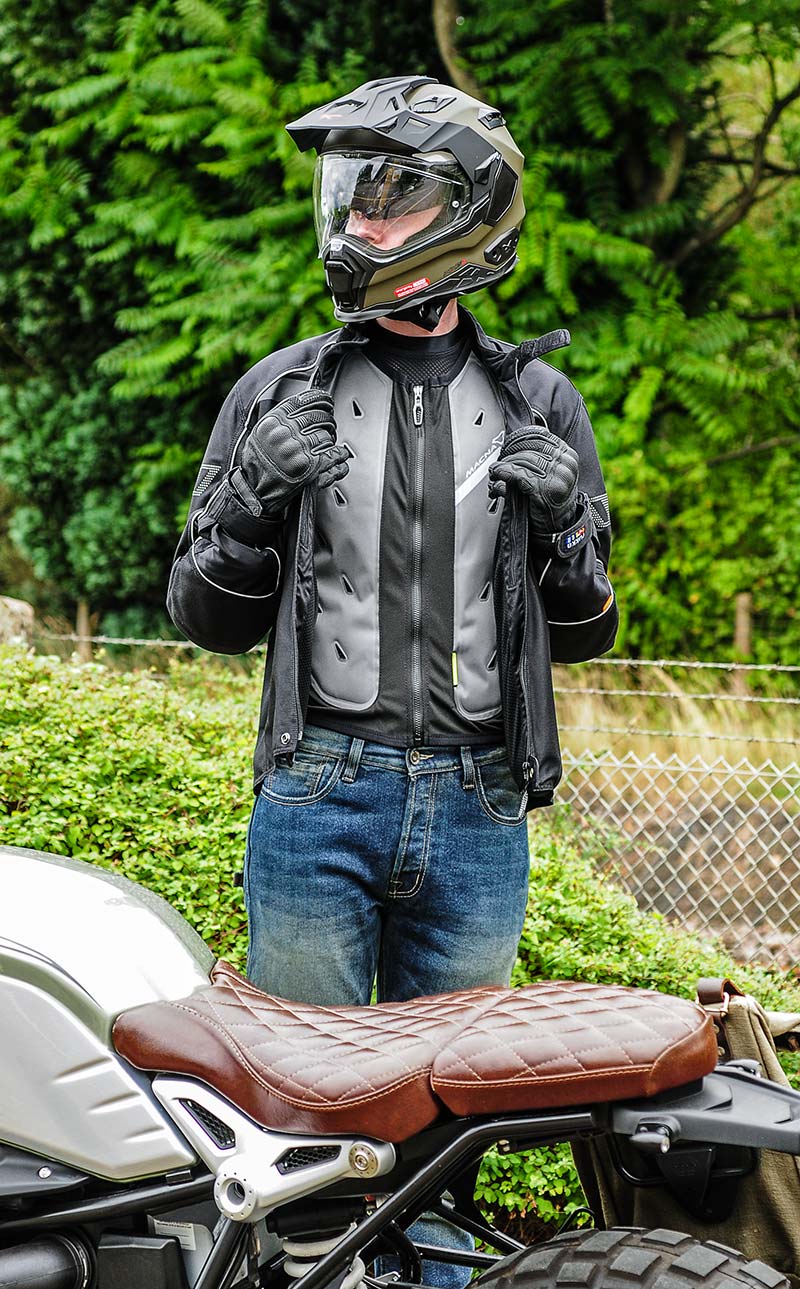 It works by means of what is known as ‘evaporative cooling’. It’s based on a principle that has been employed by explorers and adventurers for centuries. As it has by soldiers in places like Iraq and Afghanistan, who would cover themselves with towels and sheets soaked in water. The theory of evaporative cooling states that a reduction in temperature will result from the evaporation of a liquid, as it removes latent heat from the surface on which the evaporation takes places. It is no more or less than the physical basis of sweating. As we sweat, the moisture on the surface of the skin evaporates, leaving the skin cooler. In the case of the Macna Cooling Vest, you pour into it about half a litre of water. When it heats up, from both the ambient air temperature and the heat from the body, the water in the vest starts to evaporate. This leaves the inner surface of the vest, which sits next to your skin, cooler. The body’s core temperature drops. Your body, therefore, doesn’t have to sweat in order for you to cool down, and so you remain hydrated, and in control. 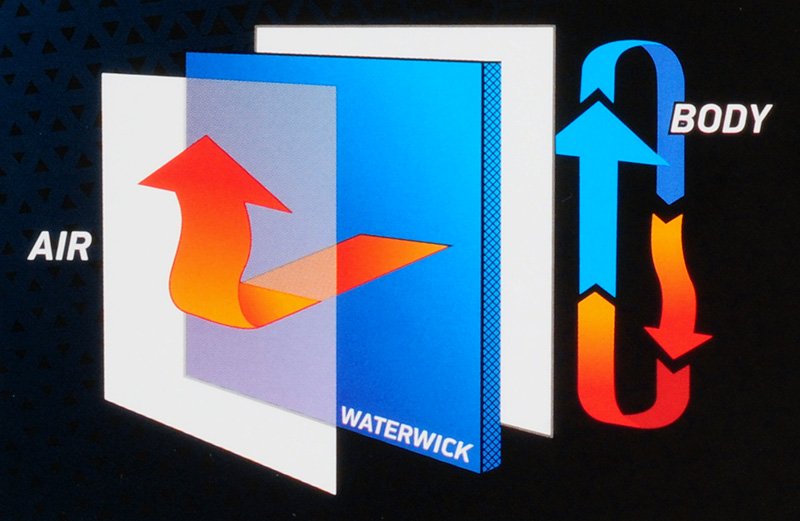 But does it work? Yes, it does. We’ve used it ourselves, and we’ve had many customers who have used the vest in places like Death Valley, the Outback of Australia, and so on. In fact, it works amazingly well, such that we would suggest that it’s a must-have accessory if you’re going to be riding consistently in 30 degree plus temperatures. Of course, if you’re going to be working hard on the bike, and expend large amounts of energy, you might find it indispensable at even lower temperatures. The vest itself is really well designed. It’s cleverly engineered to maximise the cooling effect, and is comfortable to wear. The trick is not to overfill it with water. Too much water in the vest won’t help, because the larger the amount of liquid, the longer it will take to heat up and evaporate. By the same token, there’s no point in pouring ice cold water in. Pour the water in to the vest, then move it around. Roll the vest up and try to make sure that the water is evenly distributed throughout the vest as you want the maximum contact of water with the inner surfaces of the vest. 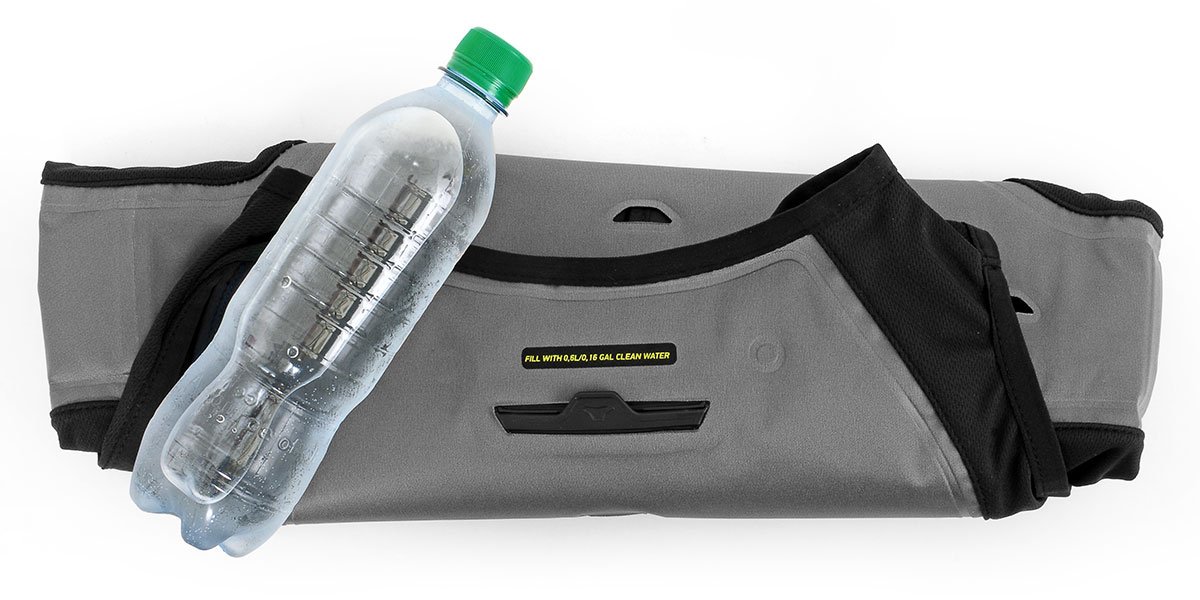 Macna reckon that wearing the vest can decrease the body’s temperature by up to 15 degrees Celsius, which is appreciable in anybody’s book. That kind of drop in temperature can certainly make a difference; a difference that could have huge bearing on your wellbeing. With just 500ml of tap water in the vest, Macna claim that the cooling effect can be maintained for up to three days. Personally, we think it’s a bit of a no-brainer. It’s £140, but that doesn’t seem a lot to us for the benefits it can bring. One point we should make is that the better vented the jacket you wear over it, the more effective the cooling will be, because the water has to evaporate into the air. If you were to wear a leather jacket, for example, the water would not evaporate. The perfect combination in our view, therefore, would be something like Rukka’s Forsair worn over the vest. Anyway, we hope we’ve succeeded in explaining what this vest is, and how it works. It’s not rocket science, but the vest does employ basic rules of physics, and we stick by the assertion that, in certain circumstances, this vest could save your life. And at minimum, in the conditions we’re talking about, it could make your riding day a whole lot more comfortable. It comes in no less than six different sizes, and we’ve recently received some more stock into the warehouse. 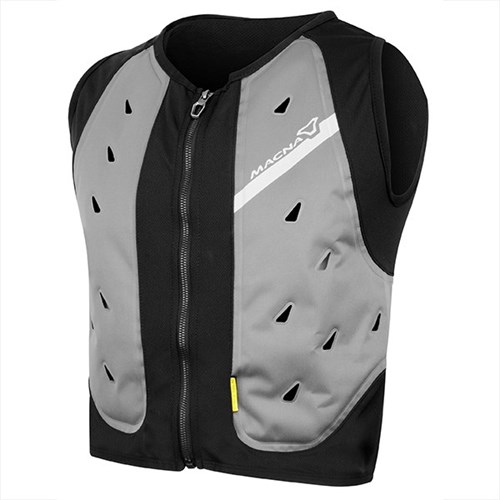 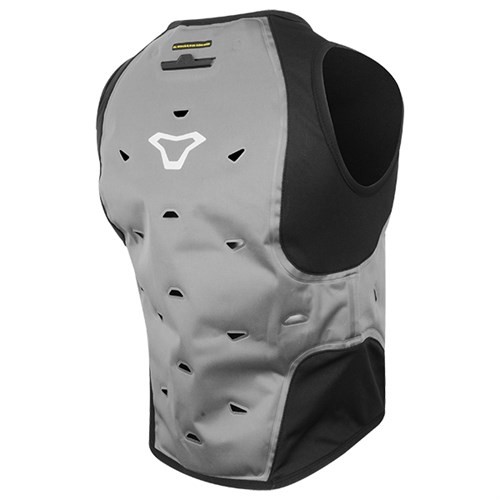