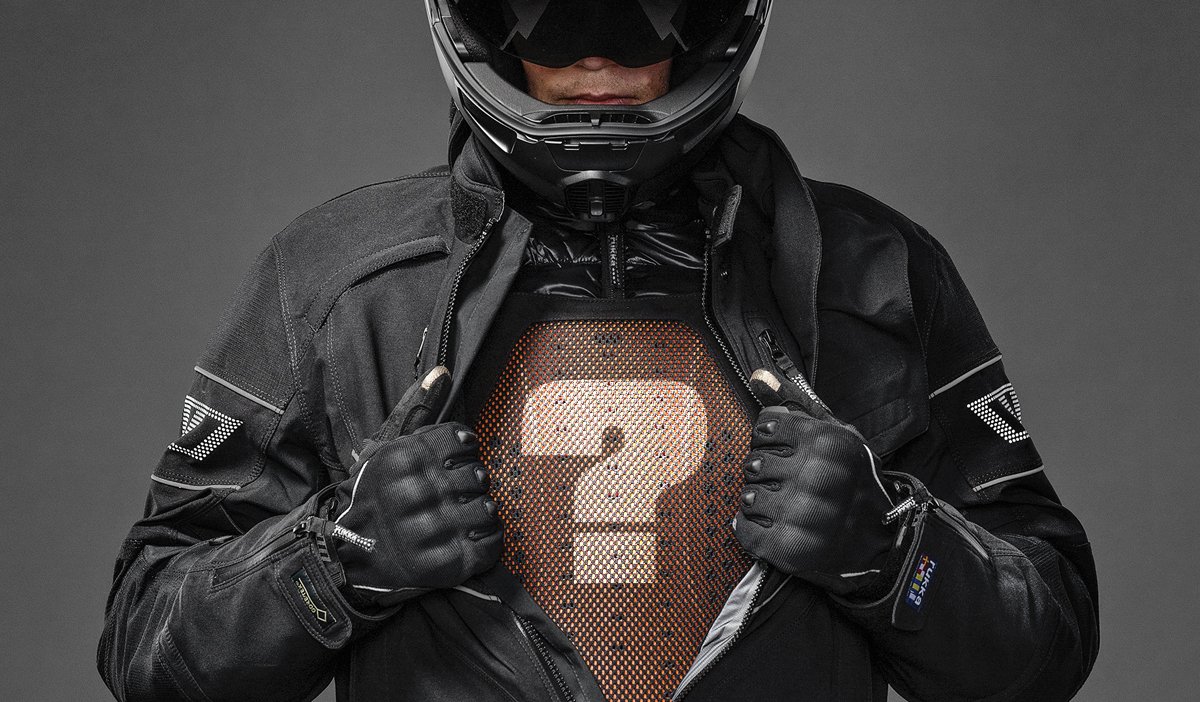 WHAT'S THE BEST
RUKKA SUIT FOR ME?

So, you're a policeman, a courier, a blood-runner, or perhaps a high-mileage commuter; and you've decided that the only gear that's up to the job is made by the Finnish maker.

Or you're somebody who likes to push the boat out and buy the best. And there's little doubting that, on a number of scores, Rukka does make some of the best gear on the market.

It's not for everybody, but it's incredibly well constructed from the toughest materials. With its laminated construction, it will keep the rain out for longer, and when it does get wet it will dry out faster than a traditional jacket and trousers equipped with a drop-liner waterproof membrane. For some, the icing on the cake is Rukka's unique six year warranty.

Let's say, therefore, that for one reason or another, you've decided that it's got to be Rukka. But there are a number of different Rukka outfits, and you're confused about which one best suits your needs. Well, in this article, we're going to try and narrow the choices a little, in an attempt to make what is going to be a significant investment, one that you get just right. We're not going to go into a huge amount of detail, because that would turn into War and Peace; instead we're going to give you some pointers, and tell you what outfit will best suit your particular motorcycling requirements. 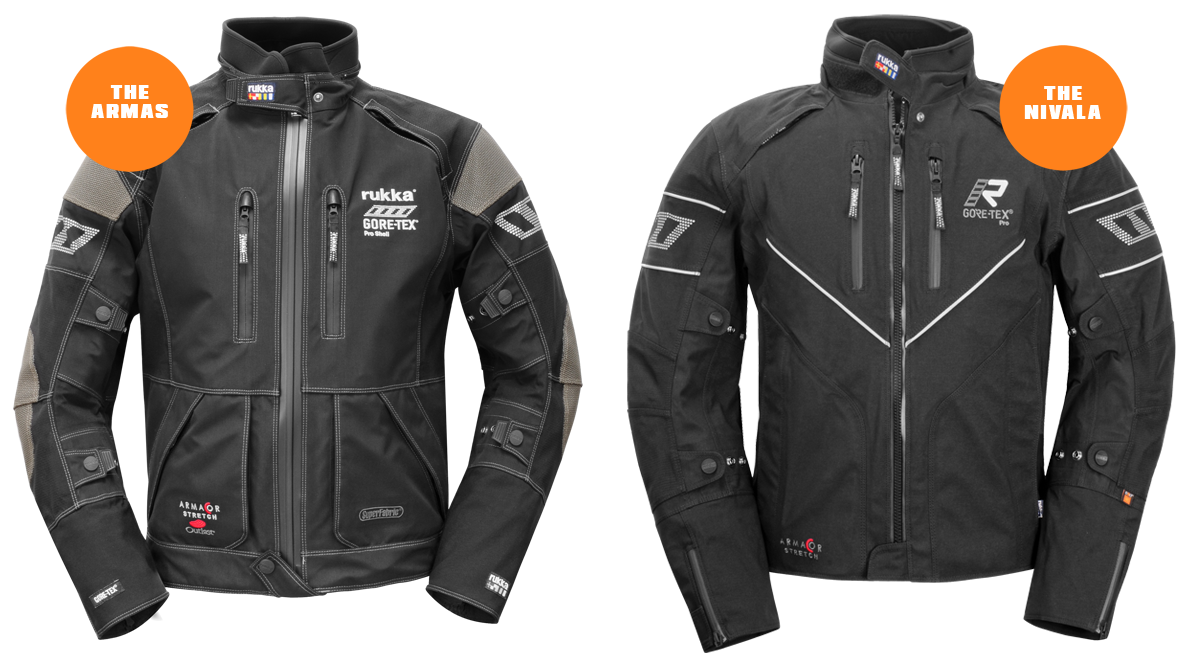 On the left, the discontinued Rukka Armas. On the right, the brand new Rukka Nivala.

Let's start with the Armas suit, which is currently being discontinued. For many years, it was the top-of-the-range outfit. It was the most expensive, and with its extensive use of fabrics like Armacor and Superfabric, it was probably the most protective. But it was also the heaviest and most uncomfortable; and without doubt the least well vented. It also had a terrible divers' suit zip that gave the front of the jacket a life of its own.

The zip was also horribly temperamental, and broke a lot. You might still find the Armas in some retailers, but it has now been discontinued. It was never our favourite Rukka model, but some flocked to it because it was the dearest! Some loved the Armas because they thought it was the safest, but, in truth, any Rukka suit is going to be more than up to the job in terms of abrasion resistance and impact at any kind of road legal speed.

The new, top-of-the-range suit is called the Nivala, and it represents a slight change in direction for Rukka. Like most Rukka models, it employs a Gore-Tex laminated construction. But the Nivala sacrifices some of the Armas's heavy fabrics on the altar of comfort. The Nivala has 'stretch' woven into its outer fabric, so it will be the easiest Rukka suit to wear. It also has much improved venting.

But the real USP on the Nivala is its internal puffa-style jacket and trousers that don't zip in. They roll into tiny stuff sacks, and you wear them only when it's cold. The bottom line is that this is going to be the warmest Rukka suit ever. But we reckon it will be much more convenient to ride in in the summer, as you won't have to be constantly zipping liners in and out. 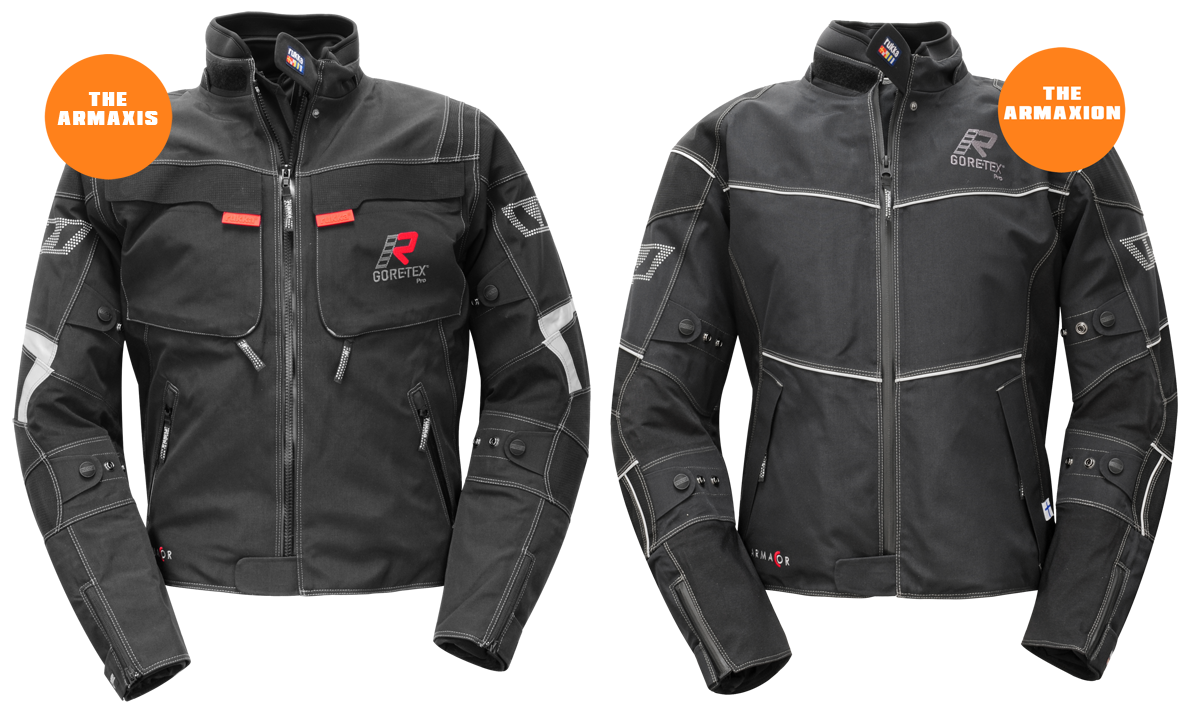 One down from the Nivala is the Armaxis. It's got pretty much all of the features you find on most Rukka laminated jackets, but its point of difference is its detachable Gore-Tex Windstopper jacket that you can wear on its own. The Armaxis has a very effective AquaSeal waterproof zip, and pretty decent venting. Alongside the Armaxion, this is one of the most popular suits in the range. It's great for commuting, you can tour in it, you can do pretty much anything in it.

The next suit down from the Armaxis is the Armaxion. It's built to the same standard and is, of course, still a laminate jacket. It lacks some of the Armaxis's bell and whistles but, in truth, there's not much to choose between the two. For warmth it's got a thermo-reflective liner. The vents run up the flanks. And you still get a waterproof zip.

The Navigatorr came out in 2016. It's very similar indeed, in terms of spec., to the Armaxion, but it's been given a bit of an 'adventure-riding' feel. It's not a proper 'adventure' jacket; there's one in the range that is, and we'll talk about that one later. The Navigatorr is more a styling exercise; it's been designed for the riders of big GSs, KTMs, and Yamaha Teneres, who spend most of their lives on the black stuff. It's got some nice features, though. Some people really go for the big pockets, and we really like the waist adjusters. Now for those who really do go off road, there used to be a jacket called the Paijanne. It's now been replaced by the Orivesi. We term the Orivesi an off-road suit, but really it's a suit that has been designed to wear in hot conditions. If you were going to travel around the world, or down into South America or Africa, the Orivesi is the suit you would want. It's brilliantly vented, with lots of zips all over. 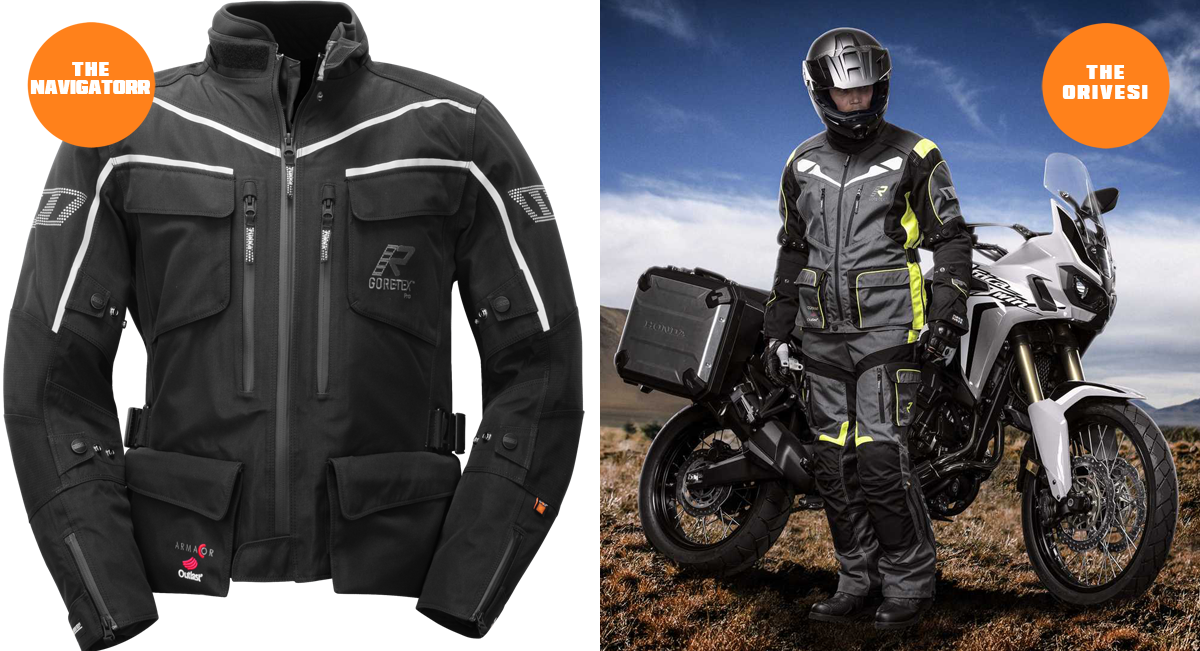 Adventure style... on the left the Rukka Navigatorr, and on the right the Rukka Orivesi.

And because when it's hot the last thing you want is a waterproof and windproof lining, this layer can be totally unzipped. Obviously, therefore, the Orivesi is not a laminated suit. It's a specialist bit of kit that gives you great flexibility if you're headed south. But it wouldn't be your first choice for commuting in the UK, and for riding in the winter. It won't be particularly warm and, in heavy rain, it will not perform as well as a Rukka laminated suit.

For those who want to ride in Rukka, but who don't need the benefits of a laminated outfit, the Finnish company makes a traditional suit with a fixed, waterproof drop liner. It's probably the best drop-liner outfit out there, and is more than up to the job of protecting most of us from the elements (honestly, less than 5% of riders really need a laminated product). This suit is called the Flexius. It's the most comfortable and easy-to-wear model in the range and, whilst not inexpensive, it's much more affordable than the company's laminated gear. There's also a ladies' version called the Flexina.

Talking of ladies, as we were, there is in the Rukka range a laminated suit for ladies called the Suki. In our experience, there are very few women who would benefit from the Suki over something like Halvarssons' Electra, but there are some out there who need and want what a laminated suit offers.

The nice thing about the Suki is that, like the Orivesi, it has some stretch in it, so it's not as uncomfortable as a laminated suit sometimes is. Which brings us to the last model in the Rukka 2017 line-up. It's called the 4Air, and it replaces the AiRock. Basically, this is an amazing mesh jacket, designed for wearing on the road, but in particularly warm conditions. It's a mesh, but you can't tell it's mesh. The material is known as Cordura AFT. It allows air to pass through it very easily but, unlike most mesh jackets, the fabric is strong enough to withstand a coming together with the road. If you're intending to ride through Death Valley, or across Utah in the summer, or if you spend a lot of time in Southern Europe, the 4Air is perfect. It comes with a zip-out Gore-Tex inner jacket so that, if the heavens open, you can still stay dry. It's another specialist tool, so to speak, but a very effective one. 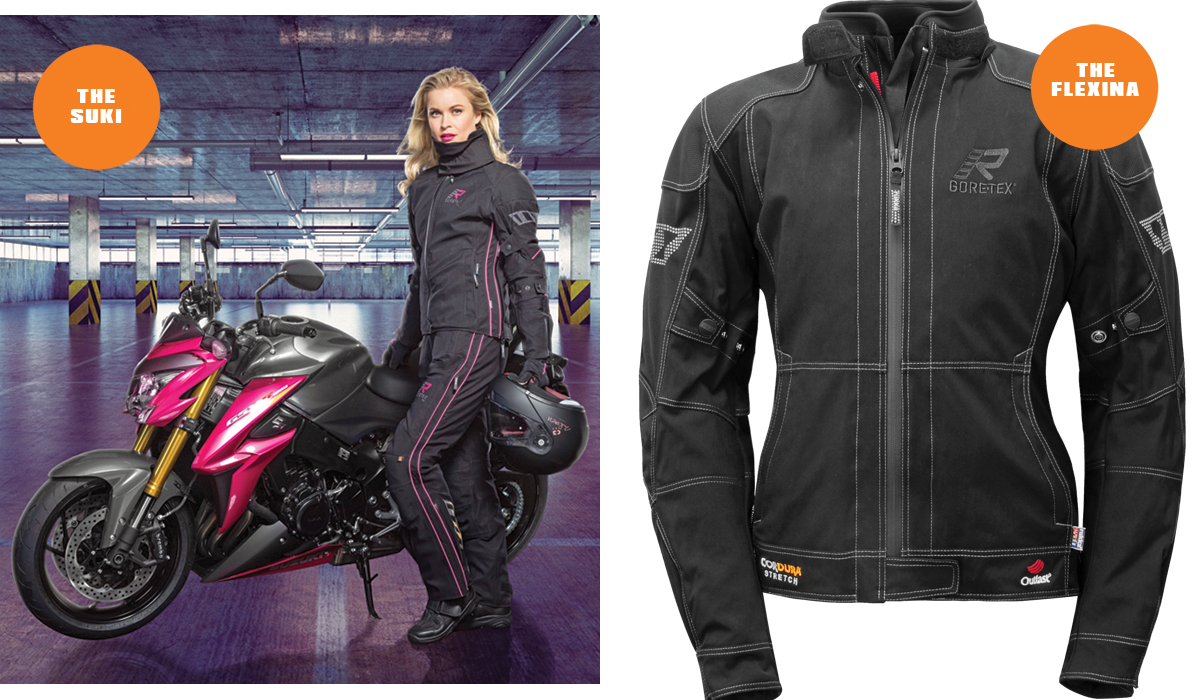 Suits for the ladies... on the left the Rukka Suki, and on the right the Rukka Flexina

So that's it as far as Rukka jackets and pants are concerned. We'll talk about their gloves on another occasion.

Even though, overall, we're not the UK's largest seller of Rukka, we're almost certainly the largest single outlet for the brand. We aim to have pretty much the entire range in stock, in all sizes, all year round.

Obviously, we can never guarantee this as the range is huge, especially when you take into account, short-leg lengths, long leg lengths, D sizes and so on, but we don't do a bad job. Personally, we reckon an investment of this order warrants a personal fitting, and what's for sure is that nowhere in the country will you find people better equipped to ensure you get the right suit in the right size.

And finally, don't forget our 10% Price Beat Guarantee. If anybody in the UK offers any Rukka item cheaper than us, we'll beat that price by a full 10%. If the seller is in the EU, we'll match the price.

Anyway, we hope this run-through has been helpful. If you want more assistance, come and see us.

You know where we are •