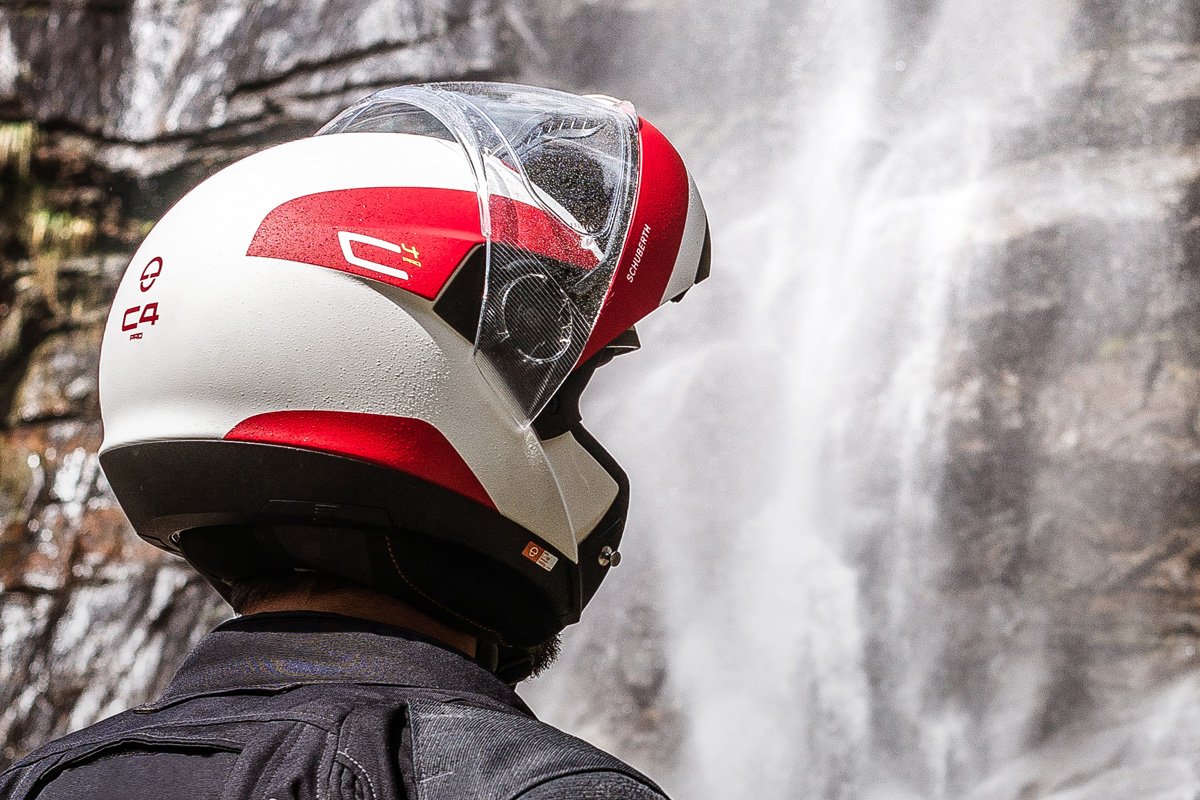 The C4 was launched to an eagerly-anticipating audience in early 2017. After all, a new Schuberth flip lid is quite a big deal. It was never a bad helmet; it was actually quite a good one. Indeed, in 2017, it won Motorrad’s comparison test of no less than 12 different flip-lid helmets.

But like many first-generation helmets it suffered from some initial gremlins. In many ways, the issues were far less serious than those that afflicted Shark’s most recent modular helmet, the Evo-One. The real issue, however, was that for Schuberth the bar was, and is, set much higher.

And this is understandable, because Schuberth is one of the most prestigious brands on the market, and the company has an unparalleled reputation for quality. This is the company that actually invented the flip-lid helmet, as well as the drop-down sun visor. Their helmets hugely exceed the ECE safety standard. And Schuberth is still the only helmet manufacturer to have its own, in-house wind-tunnel testing facility. Given all this, given the company’s experience, its facilities and resources, many expected the new C4 to be better than the C3 Pro, and although it was in some respects, it wasn’t in others. 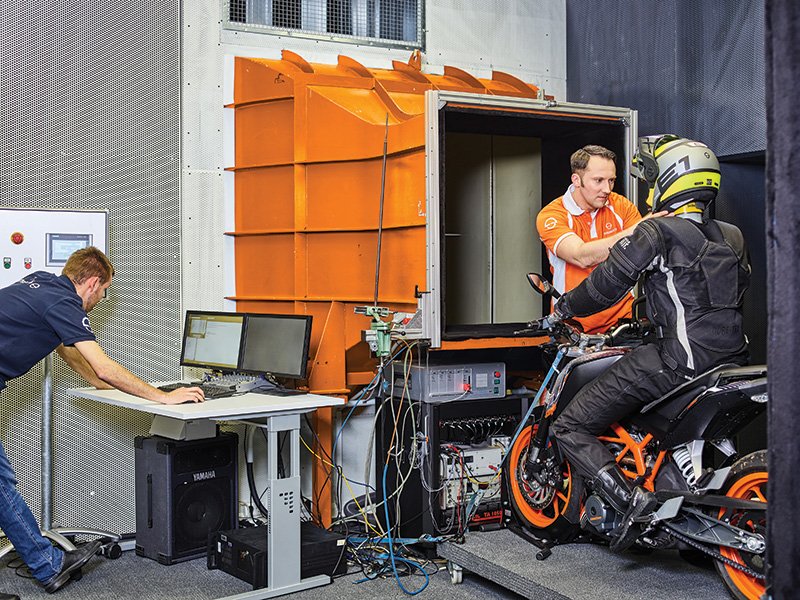 Schuberth is one of the most sophisticated helmet makers in the world. They even have their own wind tunnel. Expectations from Schuberth, therefore, are higher than for other brands. It’s probably why the C4 disappointed more than it should have done.

That the C4 came to market before it was fully tested, developed and sorted is probably beyond doubt. Initially, it was well received. Slowly, however, issues began to surface. For us, the main one was was condensation. The C4 has a huge visor. Schuberth originally used a vastly inferior, somewhat cheaper, anti-fog insert. It should never have even been contemplated by a premium brand like Schuberth. The visor was not up to the job; it did not work. As an act of appeasement, Schuberth did eventually supply us with top-of-the-line 120 Pinlocks for all those customers who had ever purchased a C4. It swiftly solved the problem. 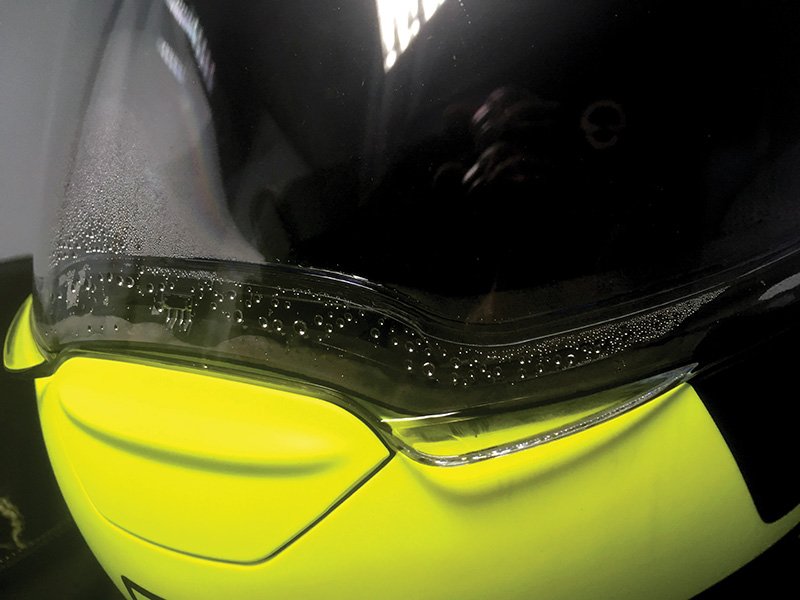 The most significant issue with the C4 was condensation inside the visor. It took a while for the issue to be acknowledged. But the fix was simple; an upgraded Pinlock 120 anti-fog insert!

But by this time the helmet was somewhat tainted. And so other minor issues started to gain a significance they did not warrant. On a few helmets, there were intermittent issues relating to the comms.. On some helmets, the chin-vent facing fell off. Some of the earlier helmets suffered from water ingression, and there was a feeling of disappointment that the helmet wasn’t as quiet as some people expected.

And so, in early 2018, Schuberth started work on a new model: the C4 Pro. Recently, we visited the factory in Germany to talk to the company’s management about the new C4 Pro, and to work out whether this was a helmet we really wanted to get behind. We went through all the key issues, as well as some that we weren’t personally aware of; and we listened to the steps that Schuberth had taken. 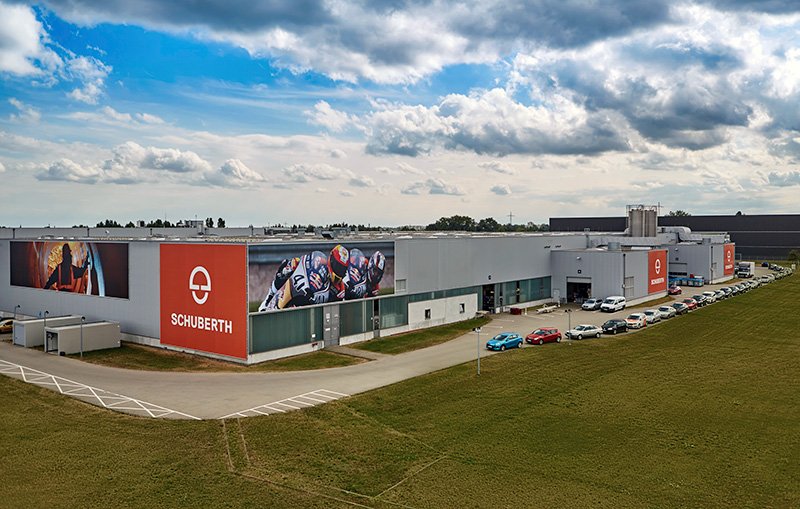 For us, the main problem had always been condensation on the visor. This was sorted some time ago, as we have explained, but it was encouraging to hear that every C4 Pro will come pre-fitted with a Pinlock 120. Not just in the box, but properly fitted and tensioned to the external visor. And this last point is important because at least some of the condensation issues on the original C4 were created by those who did not know how to fit the Pinlock correctly.

Fit is always a subjective issue, and we never really had a problem with the original C4. If it fitted, it was fine. If it didn’t fit, we tended to recommend other helmets. But Schuberth has changed the shape of the eps on the new C4, and they have also fitted a much plusher interior lining. Even we have to admit that the new helmet feels nicer and more comfortable. 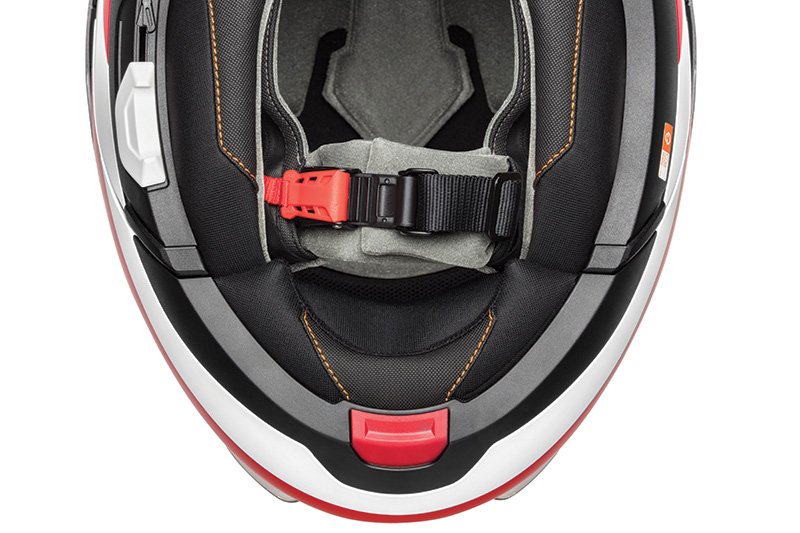 The new C4 Pro has a much more luxurious and comfortable lining that makes the new helmet nicer to wear. It also contributes to it being quieter to ride in.

Of course, where the Schuberth is still a disappointment is in its inability to take different thicknesses of headliner and cheek pad. Nobody does this better, more systematically, more effectively and simply than Shoei, but in a world where Bell, Shark and Arai all offer different internal padding options, one cannot help but feel that Schuberth should too.

As part its programme of improvements, Schuberth has worked hard to make the C4 a quieter helmet. Personally, even though we instinctively felt the C3 Pro was quieter, we always thought the C4 was pretty quiet. Schuberth, it would seem, felt it could be improved upon.

The new, thicker, more luxurious lining serves to deaden sound in the helmet, whilst a new, tighter neck roll stops air entering the helmet from the underside. The slots that take the ‘brains’ and the battery for the comms. system have also been given the sound deadening treatment, as has the slider mechanism for the drop-down visor.

When Schuberth first launched the C4, they did not actually claim that it was as quiet as the C3 Pro. Well the company is now prepared to publish figures showing that the new C4 Pro actually is. In fact, the cheaper C4 Basic is quieter still, but that’s another story!

When the C4 was first announced, it was its clever comms. arrangement that represented its USP. The helmet came pre-wired with earphones and a microphone concealed in the headliner. To activate the comms., you simply bought a pack that included a ‘brains’ module and a battery. You slotted them into pockets in the neck roll, and you were good to go. There were occasionally some connection issues with the battery module. Schuberth has now sorted these, and they have taken the opportunity to place a new and discrete microphone in a more traditional position. 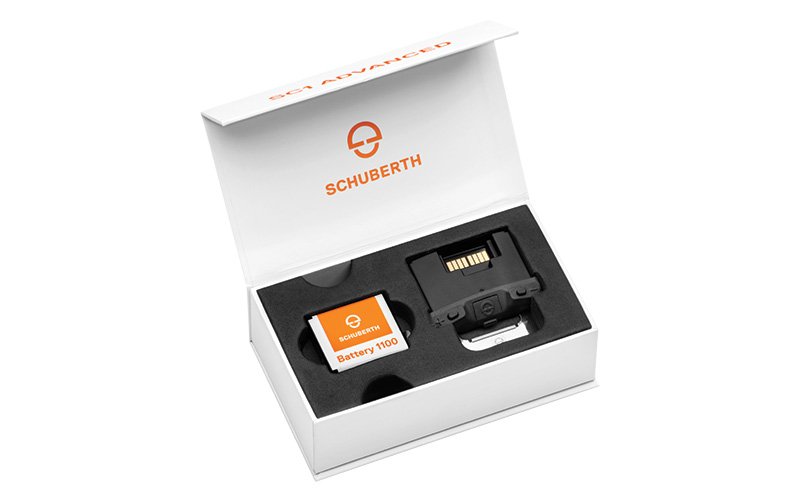 It was the technically advanced comms. that really set the C4 apart from the crowd. No complicated installation was required. It was totally plug and play. With the C4 Pro, the intermittent connection issues have now been eradicated, and Schuberth has taken the opportunity to reposition the microphone into a more traditional position.

Schuberth tell us that they have upgraded the C4 in lots of other minor respects. They have pretty much addressed every issue ever raised by its distributors, most of which we never, we admit, came across. We’re talking about things like a fly net in the upper vent, thinner earphones for extra comfort, the addition of a Velcro panel on the under-strap, and so on.

So the million dollar question is this. Has Schuberth sufficiently addressed all the problems of the C4? And of course the answer is that we don’t know. They tell us they have eradicated all the issues, and that this helmet has been extensively tested by the factory’s own in-house team, as well as by independent motorcycling groups. 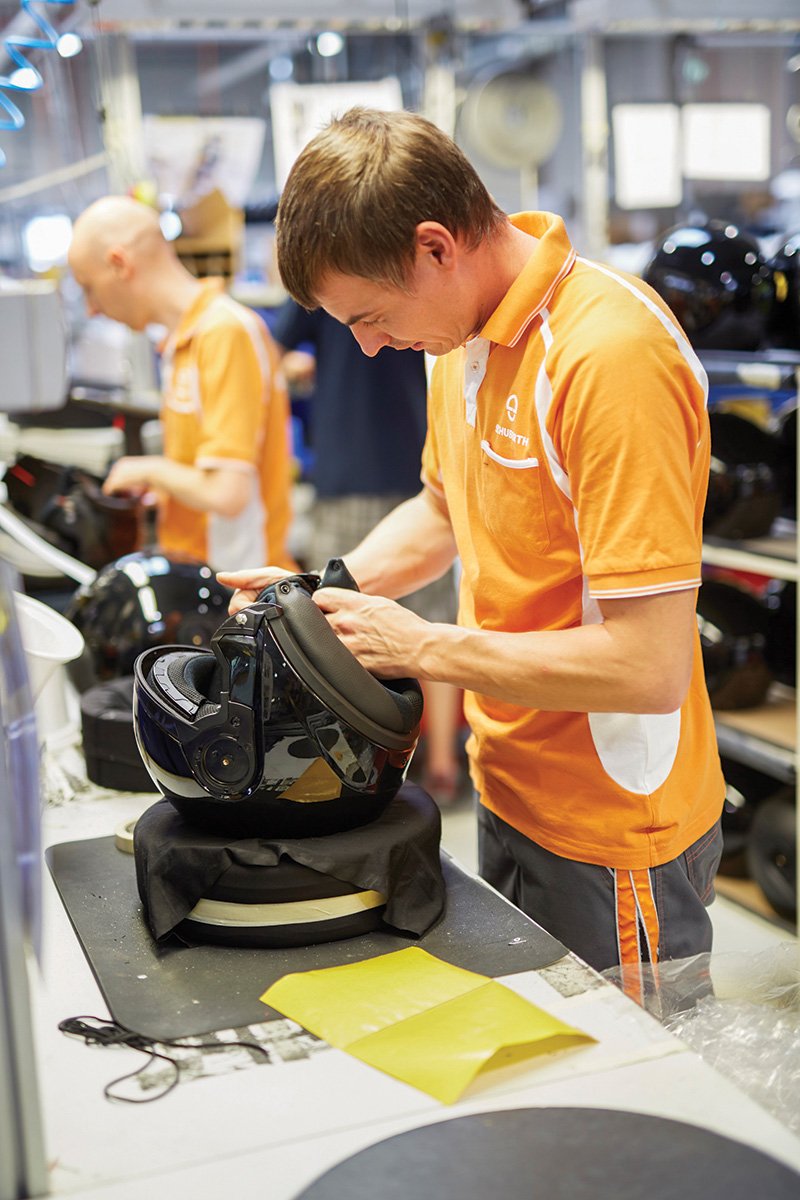 Helmets on the production line are randomly removed and checked for safety by testing them in the company’s in-house laboratory. If a batch is found to be faulty, that entire run is removed from production. This is what happens when a company produces its own helmets. It doesn’t tend to happen when a company has its helmets made in a third party’s factory in China or Vietnam.

But this is where we get to. Clearly, Schuberth know that the C4 didn’t set the world alight. They have acknowledged the issues, and they have attempted to address them. The company has been much embarrassed and somewhat damaged by the C4. And the truth is that they simply cannot afford for the C4 Pro to fail. If it does, the company’s reputation will be in tatters.

All this causes us to believe that the C4 Pro will eventually prove to be the helmet the C4 should always have been. From what we’ve seen, it is improved in just about every respect. In recent weeks we have been riding in the C4 Pro, and we have had no issues. In fact, we are very impressed. 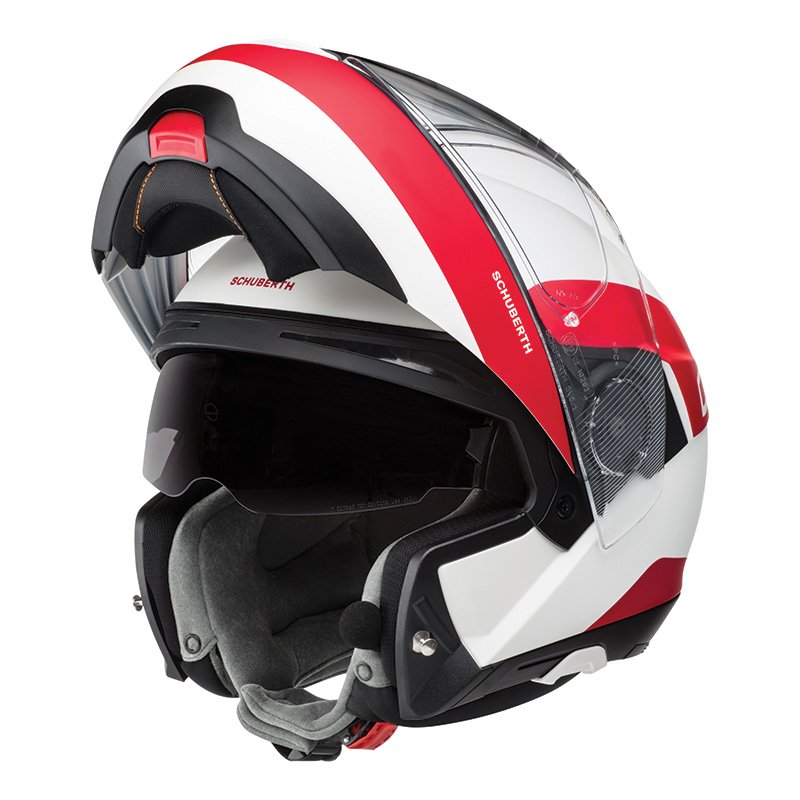 The C4 Pro will still not be perfect. No helmet works for everybody. It will fit some people and not others. It will work better on some bikes than others. Right now, though, we are prepared to give the C4 Pro our endorsement. It was always fundamentally a well-designed helmet, albeit with a few glitches. It’s now a very good helmet with, as far as we can see, very few, if any, problems. Only time will tell, however, if, like the C3 Pro, it comes to be viewed as a great helmet.

We’re going to close, though, with some thoughts on another version of the C4 Pro called the C4 Pro Carbon. Our views will not endear us to everybody. The new C4 Pro Carbon looks amazing; we really do like the squared patterning of the carbon weave. But in some ways a carbon C4 Pro seems unnecessary. Most wearers will be riding heavyish touring or adventure bikes. The saving of 150 grammes is pretty insignificant on such a bike. We might take a different view if carbon helmets were safer. But they’re not. They’re just lighter, more expensive and more carbony! Yet there is a sub-set of bikers that loves carbon and so, for these riders, the C4 Pro Carbon may be the ultimate in flip-lid sophistication. 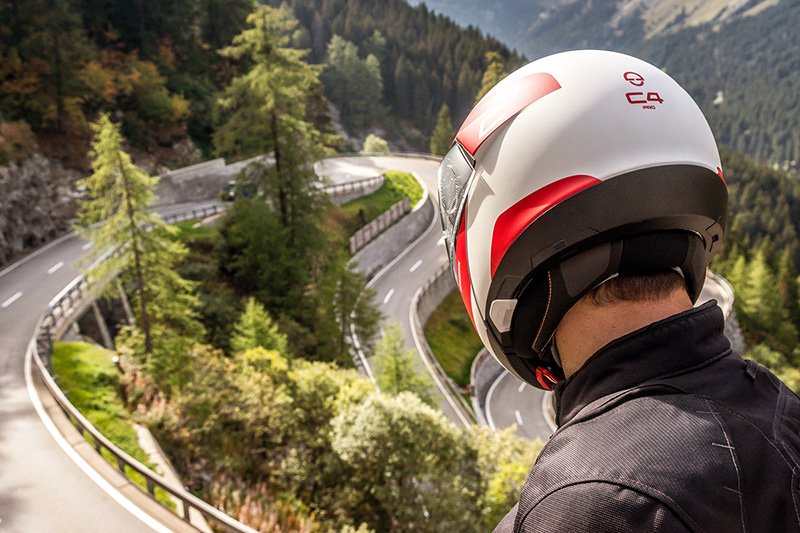 But, ‘caveat emptor’ applies here; buyers need to be aware. And that’s because the comms. in the carbon helmet will not work as well. The theoretical talk distance on a C4 Pro fitted with its Sena comms. is 1 km. On a C4 Pro Carbon, that reduces to 350 meters because the carbon fibre blocks the signal. 350 metres should, in our experience, be viewed as a maximum. With trees, the wrong atmospherics, and slight bends in roads, you could be talking about 200 yards, or even 100 yards. The way we see it, lovely as the carbon version is, it’s only really going to work for those who want comms. for the satnav, phone, music or a pillion. If you want to talk to other riders, we reckon you’ve got to go with the standard C4 Pro.

Anyway, as ever, come and see us, and try one on. We’ll tell you if the fit is right for you. If it’s not, there’s always the C3 Pro, or failing that, the Neotec. 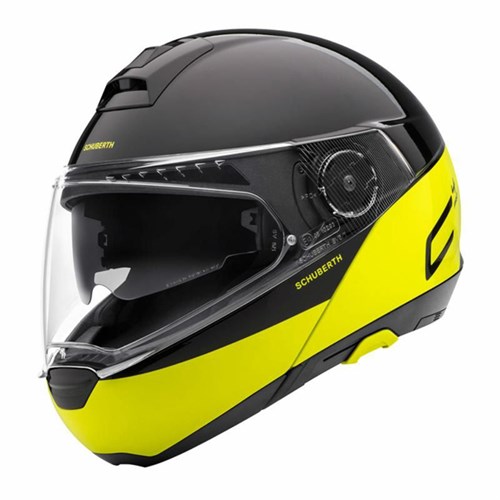 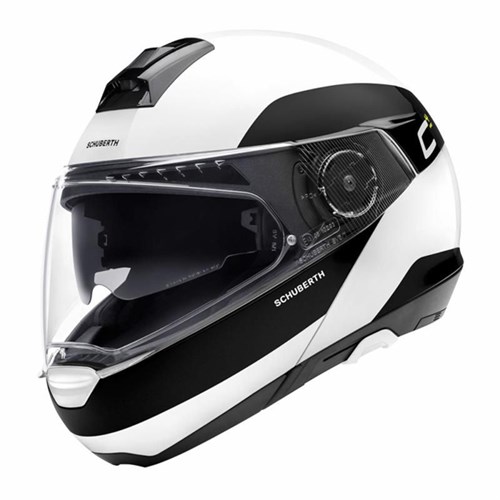 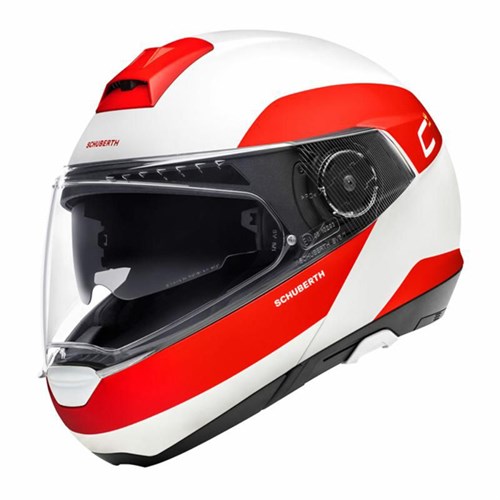 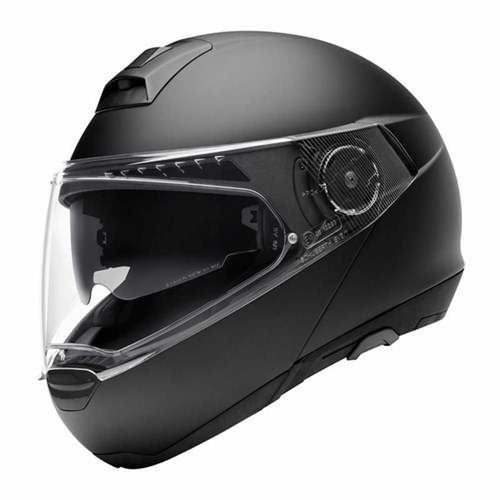 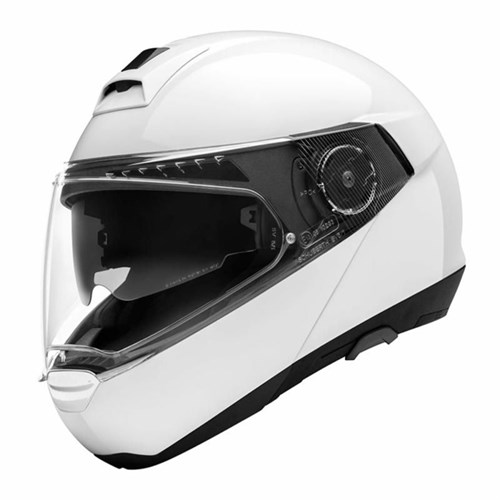 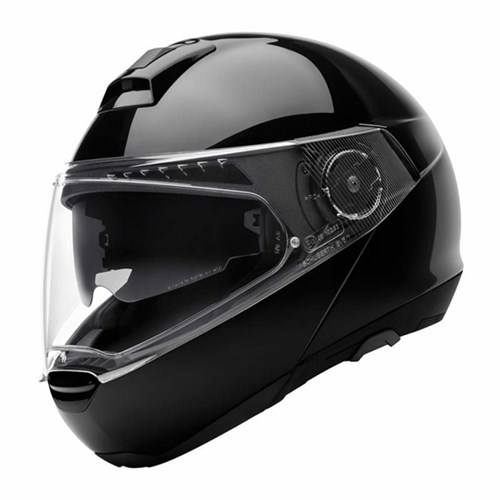 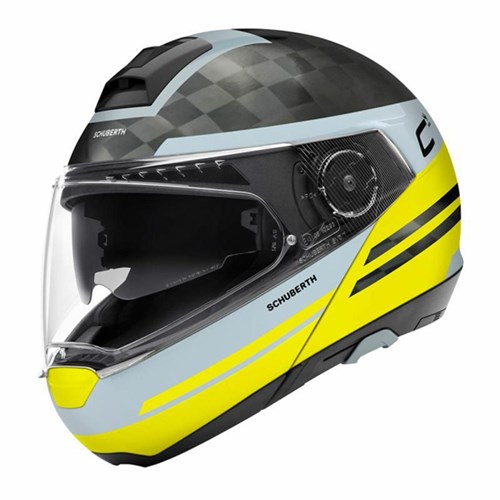 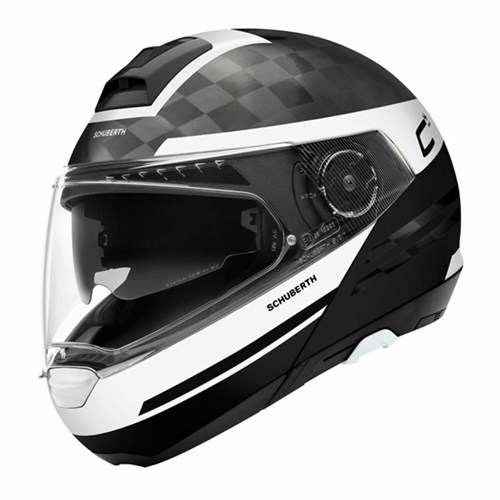 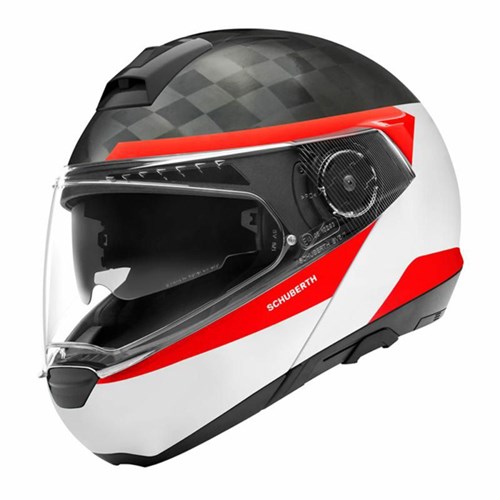